Honouring those who died by never forgetting

Posted on November 15, 2018 by Vauxhall Advance 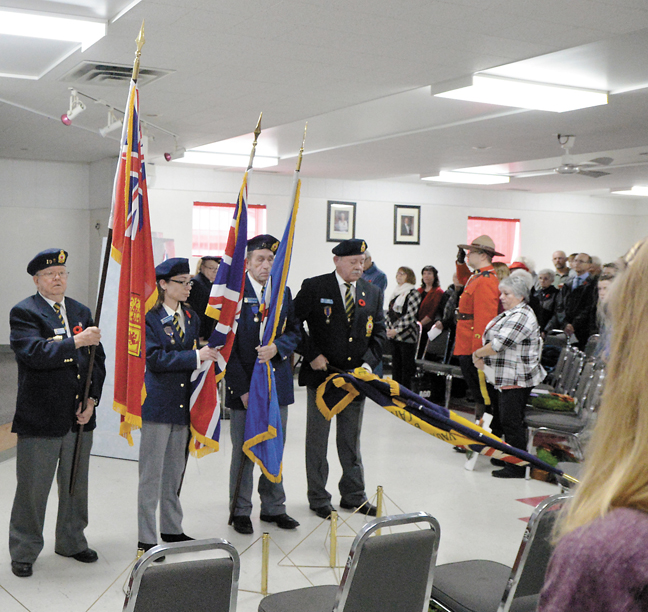 CEREMONY: The Colour Party was in their full revelry at Vauxhall’s Remembrance Day ceremony after being marched in at 10:50 a.m., prior to the 11th Hour of the 11th Day of the 11th Month. ADVANCE PHOTO BY GREG PRICE
Send a Letter to The Editor

It’s been four years since Albertans and others around the Western World noted the 100th anniversary of the start of the First World War.

This past Sunday, we marked 100 years from its conclusion.

There has been a feeling of curiosity, even romance about the bygone era over the years, and how it mimicked the actual lead-up to the “war to end all wars.”

A picture painted of the false war was one of adventure and patriotism, before troops embarked for Europe, before they entered the trenches, before the first of four winters set in, before four muddy springs and deadly summers.

It is hoped the span of time both then and now will lend a proper sense of gravity and reverence to what was one of the deadliest conflicts in mankind’s history, the introduction of industrial warfare and a truly global conflict.

In another part of a Medicine Hat newspaper, a 100-years-ago look back is a regular Saturday feature, and takes the reader on a week-by week chronological trip back to that time.

It does, however, have limited scope, and includes mainly headlines from Vimy, Ypres, Passchendaele, and war conferences in capitals and speeches from war leaders.

“Gassed” was a common condition noted in local casualties that listed all soldiers with Alberta places of enlistment as dead, wounded or missing.

Frequent, too, are unofficial casualty notes about those with a connection to southern Alberta like Taber or Vauxhall, which received an influx of Eastern Canadians and immigrants in the prewar years.

Their sons, brothers or fathers had enlisted in their one-time hometowns, but their loss was felt no less here. Others left for other ports in the West, or slipped through the cracks of history.

One such case is that of Reginald Crawford, the only son of F. L. Crawford, who was a town father in Medicine Hat, a bank manager, and founder of the Cypress Club.

The son was at Royal Military College when war was declared in 1914, and therefore didn’t have a local address on an enlistment form.

After the Battle of the Somme in 1916, the News reported the death of “Reggie… will be received locally great sorrow (in Medicine Hat, where he) will be remembered as a lad of great promise.”

The second lieutenant of an artillery brigade was only 21.

And the pages of newspapers from 1914 to 1918 are littered with reports of local clerks, railway men, merchants sons, and farmboys who were shot, captured, evacuated or killed at the front.

A well-received and well-done installation at the Esplanade Arts and Heritage Centre launched in 2014 examined the lives of men who enlisted locally.

But still the events on a whole are hard to fathom, the web of sorrow that reached across Canada, Europe, the Middle East and Africa almost too large and too complex to comprehend.

Take a look at the Legion, Cenotaph and community centre here in Taber, and you will see the lists of people who made the ultimate sacrifice in war.

Historians estimate the death toll on both sides at about nine million military personnel. Another eight million civilians died directly in the war, but up to 50 million as the result of disease or genocides in that tumultuous era.

In that conflict, 67,000 Canadians were killed and another 172,000 seriously wounded from a nation of only eight million people.

Apply the same ratio of sacrifice to Canada today and the figure approaches one million dead or seriously injured. Applied to the Town of Taber, and the share would be more than noticeable for a town under 10,000 people.

That’s a hard number to think about, but it’s the least we can do, lest we forget.