Struggles for mother in Care for Kaia

Posted on February 27, 2015 by Vauxhall Advance 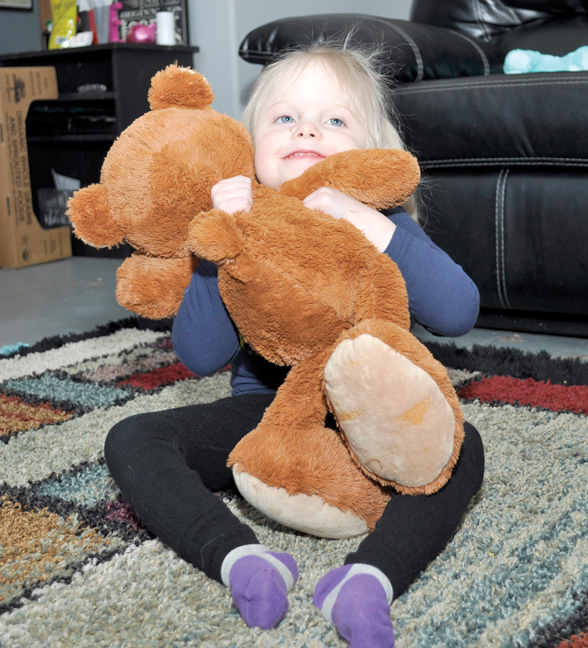 Imagine how traumatic it would be to discover your young child is suffering from a debilitating brain disease. Now, try to imagine Alberta Health Services and Alberta’s safety net turning a blind eye to that suffering.

For one young Taber mother, that horrifying nightmare is something she has been dealing with for the past two years.

Desiree McMurren is a single mother with three children under the age of five years old.

When her 3.5-year-old daughter, Kaia, was just one year old, Desiree took her to see a doctor over concerns about the baby’s development. Desiree said that is when issues with health staff first began.

“She was basically like a newborn baby when she was a one-year-old,” said Desiree. “She didn’t move. She was always just lying down. She had no control of her neck, nothing. And obviously we knew something was wrong, but it was (difficult) getting other people to acknowledge it.”

“Finally, after five months they decided they would schedule (an MRI), but it was just such a long waiting list. For seven months we were on the waiting list.”

Desiree said children fall into different categories based on the urgency of their need to have an MRI. Children with emergency needs are moved ahead of those who are deemed non-emergencies. In Kaia’s case, she did not fall into an immediate category.

Kaia has leukoencephalopathy with subcortical cysts. The term is used to describe a wide range of white matter brain diseases. Human brains are made up of gray matter and white matter.

White matter actively affects how a brain learns and functions. According to an article in Scientific American, white matter “controls the signals that neurons share, coordinating how well brain regions work together.”

“Mentally, she’s about six months old,” said Desiree. “Physically, I’d say about a year, except she can’t walk. She’s 3.5 (years old).”
Unfortunately for the McMurrens, health care workers seemed satisfied to leave the diagnosis in vague nebulous terms, and were not interested and finding out exactly what was happening with Kaia.

“They told us there was some testing they could do. And they did those tests, and they all came back negative.”

Desiree said the disease is more complex than the basic genetic testing performed, but AHS was not willing to go any further.

“They basically told us that was the end of the road,” she said. “We would never know what Kaia had. And unless we came up with the money ourselves, we could never get the testing done.”

“That was their specific words,” said Amanda McMurren, Kaia’s grandmother. “We’re sorry, we’re at the end of the road. There’s nothing else we are going to do for her.”

Desiree and Amanda were left shocked that AHS was going to simply leave them with no way of knowing exactly what Kaia was suffering from.

“We were like, ‘Are you kidding? You’re telling us we’re at the end of our rope and you’re not going to help us find out what’s wrong with this little girl?’” Amanda said. “How does that make sense?”

Desiree said she was told by health professionals that because Kaia’s condition was not life threatening, and there was no way to treat it, that it wasn’t categorized as something they would keep looking for. She was told, ultimately, knowing the exact disease, “didn’t matter.”

“But it was our peace of mind that we wanted,” said Desiree. “I think that’s fair. I think that everyone should be able to know.”

But it isn’t just peace of mind the family was looking for. Amanda said there are strands of the disease which would tell them Kaia’s life expectancy, and other important information.

Desiree said all the symptoms are pointing to the possibility that her daughter has Van Der Knaap’s Disease, but it has been a constant struggle with AHS to have their concerns taken seriously and to do the testing needed in order to learn if this is in fact the disease Kaia suffers from.

“It all comes from them saying her head was too small,” said Desiree. “Usually children with the disease have a larger head. And since hers is average; they wouldn’t fund the test.”

Amanda pointed out that her side of the family all have small heads, and in Kaia’s case, this has worked against AHS doing further testing on her.

“We have extremely small heads,” said Desiree. “Like, children-sized hats.”

“We were trying to tell them because she has an average-sized head, it’s actually big for her,” said Amanda. “But they wouldn’t buy it. And everything else on the list, she has. (AHS) was just using (Kaia’s head size) as an excuse not to fund the testing.”

“For two years we were fighting to get the blood tests done,” Desiree added. “But AHS had denied us twice because her head was too small.”
Just before Christmas, the family received news that AHS was going to go forward with the testing, a surprise turnaround that the family says would not have happened if they hadn’t approached their local MLA.

Amanda said it is extremely frustrating to think it had to come to that before something was done, and wondered how many people in Alberta might be affected with similar issues with no knowledge of where to proceed.

“If my daughter didn’t have me, who knows how to advocate,” she said, “she would be where she was 2.5 years ago with no answers and taking no for an answer. Why did we have to go to the lengths that we have to get some answers for Kaia?”

On top of health issues, Desiree’s problems have been compounded by other issues dealing with the government.

“For me, absolutely everything possible to go wrong has gone wrong,” she said. “We had some ankle braces made for Kaia because her ankles have almost completely collapsed. She has no support.”

Unfortunately, Desiree discovered on the day they were to pick up the braces that she would have to pay for them but would be reimbursed at a later date. That has never arrived, however, even after three attempts and numerous requests for Desiree to provide more information. The large payment Desiree was forced to make wreaked havoc with her bills, and her power was almost cut off because of it.

“That was last May,” she said. “I’ve been waiting to be reimbursed and they said it would happen within three months.”

Additionally, as a young mother of three small children and with very little help in the form of child support, Desiree has been living off her child tax benefit cheques. These cheques were cited as a reason to deny Desiree welfare benefits three times.

“It was just because they said my child tax benefit was too high,” she said. “I told them it’s too high but I’m here because I need help. I can’t pay my bills.”

“With three kids and one with special needs?” Amanda added. “Come on. Give me a break.”

Following her visit with their MLA, Desiree said she was then able to secure welfare payments.

“In the system, we kind of feel like nobody cares,” said Amanda.

But it hasn’t been an entirely lonely fight for Kaia’s family.

Desiree said she has received a lot of help from the Horizon School Division through Taber Christian School.

“The school system has just been so great,” she said. “The people who work with her, they get their own funding for the equipment she needs at school.”

One example is that the school has provided Kaia a walker to use at school, a valuable piece of equipment her family has been unable to afford for Kaia at home.

The family has set up a trust fund at Alberta Treasury Branch under the name “Care for Kaia.” Anyone interested in making a donation can do so at ATB or online through a Care for Kaia Facebook page (the FB page contains a link to the fundraiser).

Money raised will be used to pay for expenses and equipment, such as wheel chairs, related to Kaia’s disease over the years. The biggest expense for the family right now will be the purchase of a reliable vehicle in order to make the many hospital trips required.

Any blood work that needs to be done can be done at the Taber General hospital, but anything to do with her brain must be handled at the Calgary Children’s Hospital. The family has also traveled to Edmonton for hospital stays.

“Sometimes it’s just a lot less of a waiting list in Edmonton,” Desiree said. “A seven month wait in Calgary is a two week wait in Edmonton. It’s crazy, the difference.”

Due to her condition, Kaia will have special diet and equipment concerns for the rest of her life.

“As she gets older, these expenses are just going to increase,” said Amanda. “Are we going to be having these fights for the rest of her life?”

Grandma admitted their fundraising efforts to this point have not been as successful as they thought they might be.

“She is so amazing,” Desiree said. “She’s always so happy.”

Dontations to Caring for Kaia can be made through Alberta Treasury Branch or by visiting her Facebook page at http://www.facebook.com/CareforKaia.