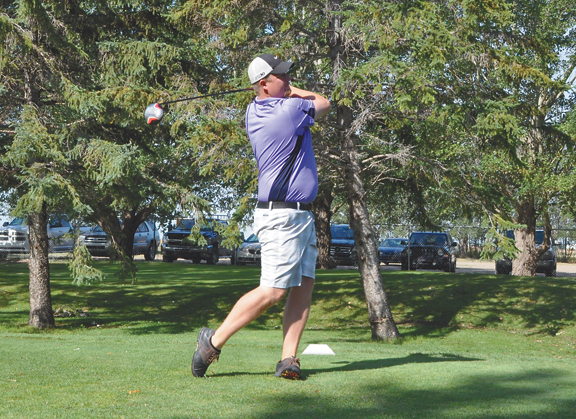 The Vauxhall Golf and Country Club is turning to local residents in its time of need.
Henry Tolsma, who represents the club, appeared as a delegation before Vauxhall council during their regular meeting on March 16. Tolsma had previously appeared before Municipal District of Taber council on March 10.

He said the golf club is in desperate need of funding after running an operating loss of about $6,000 annually and the discovery that a pair of lawn mowers will need to be replaced.

“Up until now, we’ve been scratching by,” he said. “We’re kind of going backwards now.”

“We’re in need of some help,” he added. “We’re hoping there’s something that could be done.”
The upkeep of the two aging lawnmowers needed to keep the playing surfaces in proper condition has been an ongoing issue for the club. Tolsma said replacing them will cause yet more difficulties.

“They are giving us so much trouble that we have to change them out,” he said. “We’re looking at some used ones, but on top of starting the year with a $6,000 loss, we have to deal with these things, too.”

The major issue for the club has been a slow decline in memberships over the past 10 years. Tolsma said total membership numbers have dwindled by at least 30 per cent.
“A lot of the older people are leaving and new ones aren’t starting,” he said. “The new people coming to town just aren’t in to golf or haven’t been introduced to it. We’re hoping to change that, but right now we’re in a pickle.”

Tolsma said his group has spoken with the Municipal District of Taber about the possibility of adding a camping spot to the area for out-of-town golf enthusiasts.
Mayor Margaret Plumtree said she understood there were many expenses and considerations to consider in order to make it happen.

The group has also explored grant funding, as well as the idea of getting local schools involved.

The course could be an off-site resource for schools looking to get their students outside in the fresh air while enjoying a little exercise. He also said the group was looking in to the possibility of having local businesses get involved.

“We’re going to try to get more of the bigger operators here to get corporate (memberships),” he said. “If they want to send their workers under (corporate memberships) for free, we’ll give them golf clubs to rent for free, just to get them out there,” he said.
Deputy Mayor Richard Phillips said while he understood the issue for the facility is declining memberships, he asked about a letter of request sent to the town asking for an unspecified amount of the annual recreation funding grant.

“We’re looking at close to $10,000 per year for four years’ payment on the mowers, and that $6,000 (annual operating loss) isn’t going to change much,” Tolsma said. He added the group takes part in casinos every few years but those funds are quickly eaten up by operating expenses and other costs.

“If there’s anything we need to do, we’ll definitely try it.” He added some members have invested their own money in order to keep the facility going.

“Anything that anyone can come up with would be great,” he said.

For more information, please call the Taber Golf and Country Club clubhouse at 403-654-4085.
Please be aware, however, that the number will not be active until the club officially opens April 15.