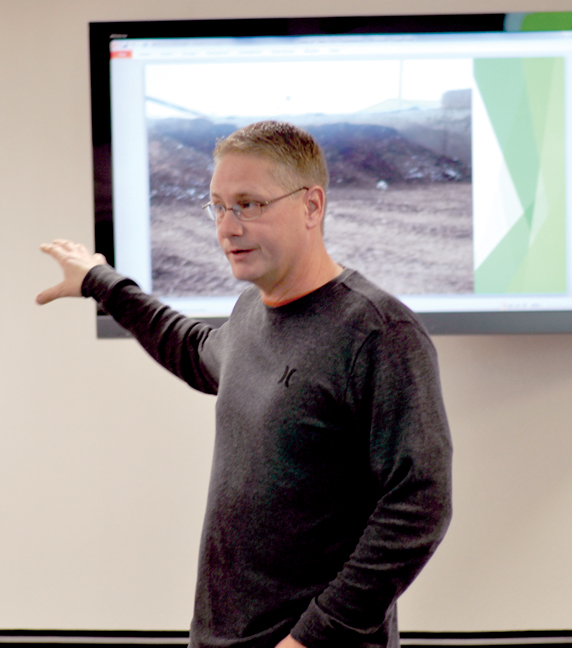 Questions remain in the air about how a proposed compost facility at Taber’s waste transfer station following a well-attended development meeting on the issue Monday.

The 14-acre site currently in development by Bio-Can would be a compost facility capable of taking in 20,000 tonnes of organic waste per year and could create as much as 10,000 tonnes of compost annually, which would be handed over to the town.

But while the Town of Taber is hard at work trying to institute a recycling plan for the town, which would see organics separated out of town waste by local residents, it has been unclear exactly how waste handled at the site by other member municipalities in the Taber and District Regional Waste Management Authority will fare.

One concern involves the use of the Scott Turbo Separator System, a mechanical waste separator designed to isolate organic material from packaging and other waste. According to Don Francis and Neil Weins of Bio-Can, the machine could be housed in Lethbridge, which would mean waste from the area would have to be transferred there, mechanically separated, and returned to the compost facility.

“The concepts behind it, it’s a good idea,” said Barnwell Mayor Eric Jensen. “But there’s obviously things that could come into effect in Barnwell. That’s why we were here. Seeing if those concerns were addressed.”

Jensen said tipping fees were a primary concern for Barnwell. Currently, the village contracts their waste collection to a third party. Ultimately, Jensen said, there are still too many unknown factors in play.

“We’re still waiting to see what comes about because of this,” he said. “There’s still a bit of wait and see in regards to the full effects we might see for the Village of Barnwell.”

Jensen said the goal for the facility was to have all the organic material separated out before reaching the landfill, that just isn’t possible for the Village at this time. He asked about how garbage from surrounding areas without an organic recycling program was going to be handled differently from the Taber plan, should the town institute an organic recycling program.

“How does this affect us?” Jensen asked.

“To be clear, it would be up with whoever is in charge of the garbage side, to make a commitment to either be diverting organics or not,” said Wiens. “If you don’t, it wouldn’t change anything you’re not doing anything right now.”
Jensen replied the waste would still be getting hauled away, meaning Barnwell could be penalized because of what he said was “the authority, that I’m a member of, is not operating in a way that my understanding of it was meant to be.”

“Your community has to decide, just like (Taber) is working through now, a recycling methodology,” said Francis.

Jensen said the recycling program currently running in Barnwell has resulted in lower tipping fees for the town.

Weins said Barnwell could begin to separate their organic waste from other waste, which amounts for as much as 47 per cent of total waste by some accounts.

“Now your tipping fees will go down,’ he said. “It’s cheaper to process it this way than it is to landfill it. That’s the solution for you.”

“It’s an opportunity for Barnwell,” said Taber Chief Administrator Greg Birch. “We’re trying to do that in (Taber).

But all of the true garbage… that’s still going to go into the landfill site. It’s really a transfer station, so we don’t landfill very much at all. It’s going to be transferred out.”

Jack Dunsmore, M.D. director of planning and infrastructure, took time to visit similar Bio-Can sites in Strathmore and Penhold, and identified several issues with residents and municipalities where the facilities were located.

He said he spoke to residents in the vicinity of those sites and listened to their concerns regarding odours and blowing plastic.

The Strathmore site was originally run by a previous company, however, and Dunsmore said the people living around it said there had been vast improvements since it had been taken over by the Bio-Can group.

“They did say they had very bad issues before with flies, and gave you credit for taking care of that,” said Dunsmore, addressing Wiens. “They did say though that sometimes the smell was so bad they couldn’t even go outside.”

Dunsmore said they also contacted Wheatland County, who reported no issues until the day they were contacted, when there were strong odours in the area. Weins said it was an issue of one of the piles going anaerobic due to the wrong mixture of materials being used.

He added Chinooks are often the cause of odours as well.
“Chinooks are killers,” said Weins. “I’m not going to lie to you.” He noted Chinook winds often keep odours close to the ground, resulting in prolonged exposure.

The only way to combat the Chinook winds was to shut down work until it passed, though he admitted it was impossible to always do that because the piles needed to be turned in order to avoid becoming anaerobic.

Dunsmore also visited the Penhold site, which the Taber site would be based on. While he was there, he was able to view the fans used for aeration of the compost piles and had no issues with noise. He noted there were blowing plastic issues at the Penhold site as well, and when he contacted the County of Red Deer he was told there have been complaints from a single landowner and that the company had addressed them immediately.

Dunsmore said the air quality issues were described as driving through “different pockets of air” where there would be an odour present in some places but not others.

“As far as they are concerned up there, they have had no real concerns,” said Dunsmore. He added the odours present when he visited the site were much less pronounced than in Strathmore.
Deputy Reeve Dwight Tolton said the wind issues in southern Alberta were different than further north in the province.

“I farm and spray a lot,” he said. “Because I farm and spray, I know there can be months where you have 20 to 25 days of wind. That will have to be addressed.”

Division 1 Coun. Merrill Harris said that he is in favour of the project, but with a home in the vicinity himself, he understood the biggest cause for concern in his area was going to be the odour.

“I think this is a great idea,” he said. “This thing is going to be located in the division I represent, and the biggest concern I have is going to be odour.”

He noted another issue with regards to odour is the vicinity of the M.D. of Taber Park.

“You run the risk of smelling out 100 or so campers down there,” he said. He asked if it couldn’t be moved to the other side of the river, as there wouldn’t be a large expense for the company.

Francis said the facility will be part of a larger recycling initiative with the town, and moving the site elsewhere would cause costs to rise.

“This is our first choice,” he said. “This is where we’d like to be. We feel confident we can operate the site in a world-class fashion.”

Taber Mayor Henk De Vlieger spoke about the opportunity for the local municipalities to become leaders when it comes to composting and recycling.

“We all know we all need to be more environmentally friendly,” he said.

“We would like to be frontrunners. We don’t want to wait until it’s forced on us. I think it’s nice that we can think ahead and become responsible when it comes to trees and all that kind of stuff.”

Jensen urged caution with the project, however, until all the variables become visible.

“The biggest concern is that this is something (Taber) is initiating and not the waste authority.” There’s some unknowns and concerns there.”