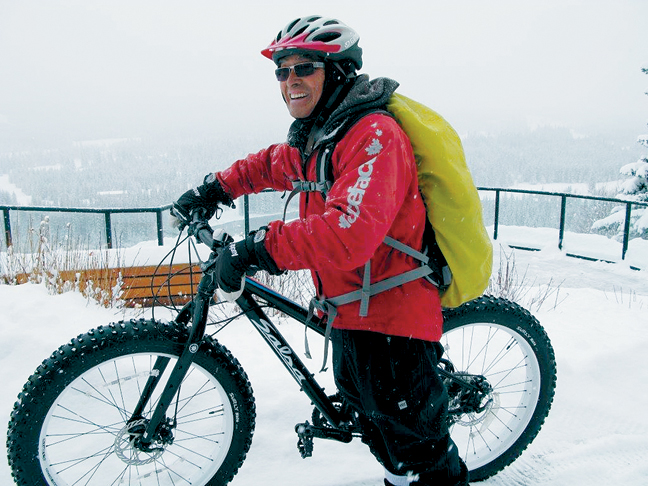 Vauxhall Academy of Baseball ambassador Yukio Kitagawa is continuing the journey with his Pennies for K’s fundraising campaign as he combines his love for the academy with his love of cycling.

On March 20, Kitagawa broke the 10,000-kilometre barrier on his way to his goal to cycle 100,000 kilometres in the next ten years, over the combined 829 kilometres of pathways and street bike routes in Calgary, on the range roads when in Vauxhall, and the groomed cross-country ski trails in Kananaskis country. His first kilometre for the fundraising campaign started on Sept. 1, 2014.

The 78-year-old Kitagawa drew his inspiration from the 12,000 kilometre cycling marathon by Clara Hughes through 100 communities across Canada to raise awareness about mental health.

“It did resonate with us (including wife Barbara) and got me going, thinking the academy would be a good place to do our work for,” said Kitagawa.

While a long feat is still ahead for Yukio, his passion for fitness is sure to keep him going. A nationally-recognized powerlifter in his prime, Kitagawa has been able to keep his love cycling unfettered even with advancing age.
Nevertheless, Kitagawa still finds time to lift three times a week as well along with his cycling, something that has been a habit for him for over 60 years. Yukio continues to do balance exercises, and to incorporate some yoga maneuvers for flexibility.

“The reason we are trying to get so much done in the front end is because we have concerns about winter and age and all that sort of stuff later on,” said Kitagawa. “I thought if we front loaded it for two or three years then towards the end it will be a lot easier to do as we age.”
Yukio hopes to pedal his symbolic 100,000th kilometre when he is 88 years old right in front of Jets Stadium as he continues his support of the baseball academy.

Each year for the next 10 years, a seven-month segment will be devoted to fundraising for Jets baseball, coinciding with the academy season, beginning on Sept. 1 and concluding March 31.

The goal in the fundraising segment is to cycle a minimum of 5,000 kilometres and raise $10,000. Yukio’s wife Barbara accompanies him on some of the rides and has offered to match each of the pledges in the Pennies for K’s campaign.

“The things that keep us motivated is I always set short-term daily goals, then I have medium-term goals and then the long-term goals. That’s how I keep focused,” said Kitagawa. As with any outdoor activity, it can be subject to the whims of Mother Nature. “The nice thing about cycling is if I have a good day, I can bank that for other days I don’t do as well.”

As inspirational as Yukio’s voyage has been so far, he admits, he has nothing on the Monarch Butterfly.

“Apparently, they fly 50 miles a day and they do 2,000 miles from Canada to Mexico in six weeks,” said Kitagawa with a chuckle. “It’s astonishing.”

Kitagawa was able to pick up some more pledges canvassing the room at the recent Vauxhall Academy of Baseball fundraising and awards night. Also the campaign was featured at a Lethbridge Bulls Legends of Baseball event.

“We are starting to make some inroads. The big thing is, we are not celebrities. You have to be a celebrity to raise a lot of money with that name recognition,” said Kitagawa. “I think over time since we are doing it over a 10-year period, it will get out there.”

The following is an excerpt from Yukio Kitagawa’s cycling diary documenting his recent days when he broke the 10,000-kilometre barrier:

In retrospect, I suppose the goal of riding a total of 5,000 kilometers from September 1st to March 31st, the period designated for the “pennies for K’s”, a fund raiser for JETS Baseball, now appears to be immoderate, but to be clear, it was based on riding 25 kilometers per day, cycling time two hours plus a day, as well, some consideration to, the majority of the ride was to be done in the winter season.

Of course, that rational projection did not account for some parameters that are still engrained in my physiological and mental make-up; that of, athleticism, competitiveness, determination and idealism.

The outcome, the doubling of the daily ride from 25 to 50 – 70 kilometers per day and the time riding from two hours plus to four hours plus, all of this possible because of the unusual moderate winter, subsequently for most part, good riding conditions. However, lest one gets the notion that what was achieved thus far was incredible, consider this anecdote related to Celine Bianchi (in Calgary Senior) by journalist Tom Babin from his book Frostbike: The Joy, Pain and Numbness of Winter cycling.

In doing his research, he visited Oulu, Finland, and relates this observation, “I was at a store and saw a grandmother walking out with her groceries, she then popped them into her basket and cycled off through the snows. No helmet, no special clothes, she was simply running an errand. It really showed one that anyone could do it, no matter your age.”

Clearly, as noted by Babin, it seems the mores of countries like Finland, “ . . . pedaling in the coldest season is a perfectly reasonable thing to do.” Babin’s cycling experiences in winter, has resulted in his belief that our relationship to winter has been effectively altered by modern living.

He writes, “As Canadians, we tend to think of ourselves as winter people, but I think we’ve lost that over the years. It’s so easy to avoid winter now. You can go days and days without encountering the cold.

This has changed our perceptions about winter, and we think it’s worse than it really is.”

Babin’s love of cycling, now particularly in winter, enjoying “ …the exercise, fresh air and seeing my city in a different kind of way.” A type of lifestyle to which I subscribe to, while enjoying my cycling as well; however, at times it doesn’t take into account those challenges that are inherent to this sport.

Take my ride on March 11th to the newest Alberta City of Chestermere. A great ride, taking in all the new developments, and some unique architecture, save for the return trip some 27 kilometers from Calgary, I got a flat. The worst part being that both front and back wheels had just been changed with new tires and tubes.

I phoned the AMA road service, only to experience a dispatcher not aware of the new services offered, she didn’t think they were equipped to pick me and my bike up and bring me home. I was hooped.

I started my journey home, forlorned, walking my bike “feeling down”, then I remembered there might still be a bike pump in my back pack. I feared the worst case scenario, it, along with other things, may have been cleaned out to carry groceries. I was blessed there being the bike pump, and it was a slow leak. I pumped up the tire, rode 5/7 kilometers, stopping and pumping the tire up again and so on.

After getting home, Barbara was apprised of my adventure and my experience with the AMA, upon which she checked their web site only to learn, what we knew, that roadside assistance was offered. After Barbara got through with them, my membership was now flagged (this guy has a Premier Membership since 1967, he’s 78 years old, rides a bike more that he drives a car, and might need roadside service), all dispatchers to be apprised of the services offered, and a promise of a letter of apology.

Donations, pledges and encouragements continue to be received, thank you so much for that.