Tillman named to hall of fame 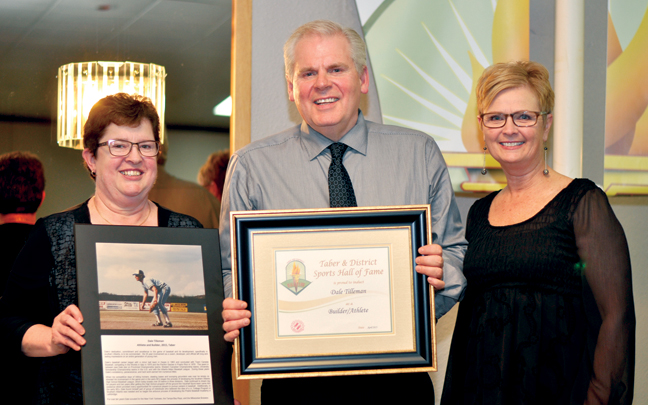 Dale Tillman is the Taber Sports Hall of Fame newest inductee. During a ceremony last Saturday, Tillman was inducted before a packed house. The evening included dinner, a special presentation on Tillman’s life, and the impact he’s had on baseball in southern Alberta.

Tillman said he was humbled but thankful for the recognition.

“I don’t like the attention but this is good,” he said. “It’s nice that people recognize it that’s for sure.” When asked what he loved best about baseball, Tillman had a quick answer.

“One of the best things you can ever have is squaring up a baseball,” he said. “I just really like the game and I really like the challenge.”
As for coaching, Tillman said the most rewarding experience was seeing young players improve over the years, something he said he shares with coaches from all sports.

“It doesn’t have to be baseball,” he said. The evening also included congratulations from Taber council delivered by Coun. Rick Popadynetz. Popadynetz joked he had Tillman as a phys. ed. teacher in high school, and his throwing technique had suffered because of it.

“Thanks to him I still throw like a girl,” Popadynetz said.

The Taber Sports Hall of Fame was established in 2002 after a need in the community was recognized to identify and celebrate those in the community who had brought honour and prestige to the area through sports.

The organization is backed financially by the Kinsmen. After the ceremony, Tillman said the value of sports programs lies in three fundamental values.

“Programs should teach us something, challenge us, and we should have some fun,” he said. “It doesn’t matter if it’s a tiny mite baseball program, or a high school program, or a collegiate program. It’s important that you can do all those things.”