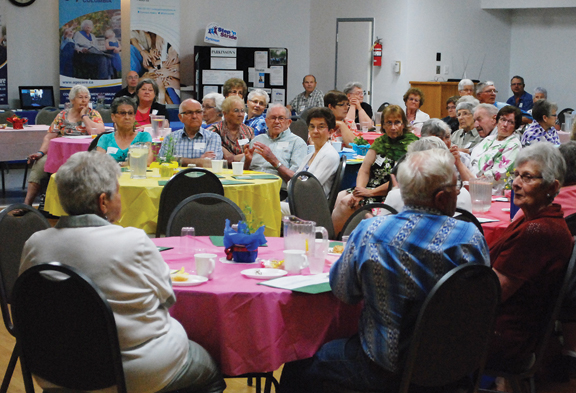 Endowed with a rich and vibrant history, Enchant has survived drought and other hardships to become the community it is today. At the Enchant Seniors Conference hosted earlier this month, attendees were able to lift the curtain on some of the many details surrounding that history.

“Of course the story of this area starts much before the start date of my presentation today,” said museum educator Belinda Crowsen from the Galt Museum in Lethbridge, who made a presentation at the conference. “There’s Sundial Butte, the teepee rings throughout the area — remind us that the human history of this area is much longer. The Blackfoot, the other First Nations, have a long relationship with this land.”

Those same First Nations warned early settlers to expect a dry welcome in the area.

“They knew the land well enough, that when it was chosen as a place to homestead, they were advised not to settle here by several First Nations. They said ‘Be warned. It gets extremely dry’. But it was thought they were only saying it to keep white people off the land. In the late teens, 1920’s, 1930’s, they learned that this was an absolutely dry place,” said Crowson.

Early communities cropped up in the area prior to the arrival of the railroad, including Rosemead.

“This area was also rangeland, used for cattle throughout the late 1800’s and early 1900’s, but it would all change,” said Crowson.

“Our story begins in 1906 when homesteaders began to move into the area. In the beginning, there was Rosemead, a little community west of town. Prior to 1909, anyone who settled in this area had to get their mail at either Rosemead or Sundial. Rosemead had a store and a post office. They also had a dance hall. Lake Travers was started shortly after Enchant, and the dance hall was moved into Travers and used there for several decades. The general store was very popular until the railway came to the area. And if you actually talk to people whose families are from this area, many people have Rosemead on their birth certificate.”

Little is left to mark the origins of the community today which has largely disappeared from the landscape.

“There is only one thing left at Rosemead today. Like so many communities, there’s a little cemetery. There are only about six headstones left, and there’s nothing to actually identify Rosemead,” said Crowson.

Those making a literal interpretation of the name of another small community in the area would be incorrect, according to Crowson.

“To the east started to develop. Around 1909, comes Lost Lake, which had a post office and small store. The name comes not because the lake got lost during some dry years, but because some lost horses were found near where a lake was. Some of the buildings from Lost Lake were later moved to Enchant when the townsite was created here.”

Another small centre in the area, unlike Lost Lake, did have a name which was more literal in its meaning, due largely to crops originally grown there.

“And then the northeast had a little community, Wheat Centre,” said Crowson. “Like the other two, it had a small store and post office, a school, cemetery and church.”

Surprisingly, Crowson noted happenings in many of these small centres were often noted prominently in regional publications.

“We have these small communities, we have these little centres developing, and if you actually look through the old Lethbridge Herald newspapers, and The Taber Times, Rosemead, Sundial, Lost Lake, Wheat Centre, Badger Lake — all of those little areas with post offices and communities, they’re written about a lot. Everything started to change for these little communities around 1914. Two big things would change the history of this area forever. The first was the railway.”

As is often the case with many prairie communities in Western Canada, the origins of the name Enchant have never been officially determined. The choice may have been a forgotten whim by a now-forgotten railway official, but Crowson did note there are varying interpretations floating about the area, depending on which resident one talks to.

“One of the things about Enchant history that we don’t know, is why we’re enchanted. We have no actual record of why the name Enchant was chosen. The town lots went up for sale in 1914, and they were advertised all over. Despite my best efforts, I have not been able to find out what they were selling for. But I don’t think they were too much.”

Unfortunately, the arrival of the railway (CPR) at Enchant largely tolled the death knell for the surrounding small centres.

“As soon as they got the railway, the little communities — Rosemead, Wheat Centre, Lost Lake — will start to lose out to the larger centre,” said Crowson. “They’ll start moving buildings in, and the community here will start to develop. Enchant developed as a very traditional homesteading place. But while this is developing, while the railroad comes to town, something else is coming near to town — irrigation.”

Irrigation would prove to be the wetstone against which local settlers managed to grind out an existence during dry periods which plagued the area in early and later days, according to Crowson.

“At this time, the Southern Alberta Irrigation Company was pushing canals through the area, and planning to irrigate the area. While the canals were pushed past, they didn’t develop irrigation actually in Enchant area at that time. The headquarters for the irrigation company was actually in Vauxhall. Vauxhall and that area started in 1919-1920 and would have access to the irrigation water. People in Enchant fought long and hard to try and get irrigation, because in the late teens and early 1920’s, an incredible drought hit this area.”

Drought and depression-era hardships drove many to leave the area during the 1930’s, according to Crowson.

“For people to survive the 1920’s and 1930’s in this area, it was absolutely incredible that they did. Many moved out, and many moved into the irrigation land around Vauxhall.”

Crowson also provided a variety of rich anecdotes about the area along with a narrative about its history, and was available to answer questions at the conclusion of her presentation.