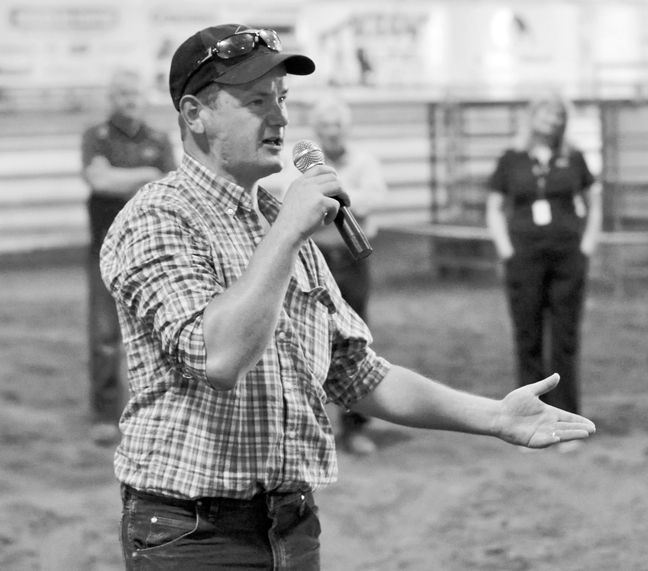 It was a cautionary tale for the packed house of children at the recent Rural Farm Safety Camp, which was held at the Taber Agri-Plex earlier this month.

Edwin Camps, a farmer from Barnwell was on hand as the guest speaker to encourage children to be safe in rural areas and be mindful of surroundings, sharing his story where he easily could not had been standing where he was, front and centre with the children.

“Maybe I’m not the right person talking about farm safety, having been in a pretty big accident myself. I’m lucky to still be here to talk to you,” said Camps to the children and parents who filled the stands at the Taber Agri-Plex on July 13.

Camps grows potatoes, and last year, wet conditions had plenty of trucks get stuck during harvest. Using a tractor to pull one of the trucks out of the mud, Camps hooked the tractor and truck together with a tow rope.

Trying to pull the truck out, the tow rope was fine and didn’t snap, but the pin bent.

“That pin got turned around and it broke. Because of the tow rope, it acted like a sling shot and it shot the pin, which went through the back window and into the tractor,” said Camps.

The pin struck Camp’s neck with violent force, breaking his neck in numerous spots. He needed a halo put on his head that had four holes drilled in it, to stabilize the area and avoid any further injury. Camps was hospitalized for 29 days on his left side.

A tracheotomy was performed on Camps because doctors were afraid that his airways could be blocked from the injury.

“It (left side) didn’t work anymore because I had nerve damage. It took a long time before I could feel anything again,” said Camps. “Nerve damage takes a long time to heal and I was lucky.”

A helicopter ambulance from Medicine Hat came in to pick up the injured Camps from his potato field, and flew him to emergency surgery.

Camps noted that while his accident involved heavy farm machinery, farm safety goes far further than that in keeping family and friends safe.

“Lots of people have cows and cows are big animals. And they can go in any direction. You have to be aware of your surroundings,” said Camps. “On the farm, parents are always around to tell you what to do and what not to do, but you have to think for yourself, too.”

“That’s what I call common sense. If it’s a big cow or a tractor or whatever backing up, or driving around the field, or whatever, you stay away from it. It’s just like when you are in school, and you come home from the school bus, you watch traffic, too, before you get on the school bus or cross the street.”

If something does happen on the farm, Camps quizzed the children of what they would do when the accident happens.

Children shouted out answers like call for a parent, shut off machinery etc.,  with Camps adding whatever action is done, he cautioned kids not to compound the problem.

“More than ever, whatever happens, make sure you are in a safe area, because you can’t help anyone if you get hurt yourself,” said Camps.

“And if you got friends coming over that aren’t from the farm for a play date to the farm, make sure you go around and tell them what’s dangerous and to watch out. Common sense and look ahead.”