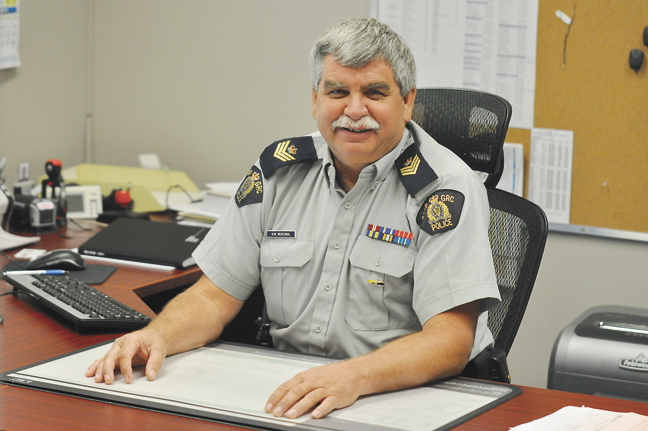 For Kevin McKenna, his policing career has come full circle.

McKenna took his new post as sergeant of the Taber/Vauxhall RCMP detachment earlier this month.

For long-time locals, if that name sounds familiar, it should.

After completing college in Lethbridge, McKenna was an officer with the Taber Police Service back in May of 1977, which lasted 14 1/2 years.

“It is ironic that I’m coming back to where I started. It’s full circle, and I’m looking forward to being back in Taber and working with the people of Taber and surrounding communities,” said McKenna. “Policing has changed a lot since I started. Technology has changed a lot. We have a lot more assets available to us than when I started in 1977. Crime hasn’t really changed, there is more (types) of them now. There are also newer drugs on the market.”

From there, McKenna joined the RCMP in 1991, and started in The Pas, Manitoba detachment  for seven years. While there, he spent seven years on the underwater recovery team.

“That was doing recovery dives and searches for the whole province of Manitoba and part of the Territories. There were 16 members on the team, and we did everything from open-water dives to under-the-ice dives, recovering evidence, vehicles and of course, people who have drowned,” said McKenna, adding he went to the coast guard college in Sydney, Nova Scotia for training for the underwater recovery team. “Physically it was challenging, but it was all volunteer service.”

McKenna’s RCMP career continued in St. Paul, Alberta in 1999, spending three years there doing general policing, before switching to plain-clothes enforcement with Integrated Border Enforcement. In 2010, McKenna was promoted to corporal for the Crowsnest Pass detachment. His latest promotion to sergeant has him making his way back to the area for the Taber/Vauxhall RCMP detachment.

“With 38 years of policing, I have done everything from general policing to plain clothes to now supervising,” said McKenna, who likes to hunt and fish in his spare time among the many outdoor pursuits he enjoys. “This is something I’ve always wanted to do, and I still enjoy going to work. Taber has always been a nice community and the people are friendly and co-operative.”