Posted on September 24, 2015 by Vauxhall Advance 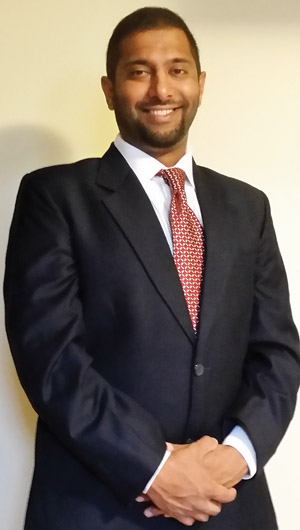 “This is primarily a rural riding with many farming communities, small towns and cities of which the items of interest are agriculture, crops, and livestock to name a few,” said Khalid.
“These items of interest are tied to issues, and the key issues are rural communities and their rural dynamics in big government; economy for farming communities, major towns and cities; infrastructure development and environment; poverty and childcare, single parents who have no income to split; new immigrants, out of work, (who) cannot find work, persons with language barriers; unsolved murders and missing persons; and unemployed and basic work place pensions.”

A riding resident, Khalid has a double degree from the University of Calgary with a Bachelor of Commerce in Finance and a Bachelor of Science in Statistics.

In addition, he has 10 years professional experience, and has worked in risk management at a public medical institution, in public accounting at a Big Four Accounting firm, and has experience in the oil and gas industry on the EPC and owner/operator side. Currently, Khalid is an independent consultant in the industry.

“I want to use my ability and privilege to be able to run for a good cause,” said Khalid.
“I used to not be too politically involved and I view this opportunity for federal office to fix issues that keep re-occurring and people keep talking about. There are certain things that citizens have concerns on that can only be fixed through government. I would like to use the federal office platform to raise issues that Canadians have and make sure people that are not able to run or that don’t have the resources to run can come to me to voice those issues which I will work on a solution and pass forward in Ottawa.”

Khalid views the key to regional success in Western Canada as continuing to forge strong ties between respective levels of government, both municipally, provincially, and federally.

“The plan is simple, which is to go visit the rural voters. I myself being the candidate will do that personally,” said Khalid. “The plan for Alberta, Western Canada, and nationally is to work with the respective government’s levels and institutions. This will require a holistic approach and if this is done right, this will make progress for Albertans and all Canadians together. Saying that, there are different issues for each province and territory and the different geographic regions in Canada. However Alberta is one wheel in the system that needs to turn and when all the wheels turn together then the system can achieve the best results. The party has policies on various issues from taxation to foreign policy, thus the vision is for a prosperous and strong Canada that is a leader and a role model in the world for other nations to look at as an example of a model state.”

The DAPC candidate pledged to visit as many areas of the riding as possible as the 2015 election campaign moves into its final month.

“As you know this riding is a big vast area with various rural communities, towns and cities. The population is lower and more spread out as compared to ridings in the city of Calgary. Notwithstanding I expect to visit as many areas of the riding as possible and engage with as many people as I can despite having no budget and literally self-financing all this. I have been to many areas already.”

A freshly-minted party, the DAPC carries no historical baggage that could cloud the minds of voters as they consider their choices on Oct. 19, according to Khalid.

“This is a new party which is clean, clear, and works for the common people. We are corruption free, have no strings attached, and are not tied to any corporations. We have strong fiscal responsibility and strong accountability aspects built into our constitution. We have recall built into our constitution and mandatory community engagement. We want to bring back democracy to the people and change the current trend of the wasting of taxpayer’s money, which we all work so hard for, on non-issues, fraud, and unjustified luxurious spending that we have seen recently.”

He went on to outline the DAPC is representative of all Canadians, rather than one region or interest group.

“The DAPC is representing all Canadians as our core values are freedom, fairness, and equality. This applies to all Canadians and Canada is defined by these values and all Canadians deserve and would expect nothing less than a government that upholds these values. We are a new party so we are clean, clear, and have no strings attached. You have given everyone else a chance, some parties have been tried and tested multiple times over. Now give the DAPC a chance and we will get the job done and I look for your support this election.”

Khalid does not characterize himself as a “typical” federal politician, something he believes will resonate with voters.

“The DAPC is a new federal party and I nor the party leader are your typical politicians. Both are common grassroots people that work hard and pay taxes just like you. Stephen (Garvey, DAPC leader) has studied democratic law for over 17 years and the reason for starting the party was to bring back democracy to the people and make the political process efficient and effective rather than politicking and wasting taxpayer’s money needlessly, which is what you and me work hard for everyday and we pay. I share this thought and that is why I am working with Stephen and the party.”

Taking a grassroots approach to governance is an integral pillar of the DAPC’s philosophy as a party, added Khalid.

“We go door to door ourselves and talk to people first hand, (and) our constitution has recall, so if I vote a certain way the constituents do not like, I can actually be recalled. This creates accountability to the people I serve who have voted for me. We will have regular open houses where Canadians can come ask questions, bring up issues, and voice concerns. This is different than the current trend where what I have heard from a person in my riding say ‘the politician is seen only during election time and if you go to their office, you get a look of what are you doing here? I’m busy what do you want?’ We will be different and engage with people and have our regular open houses.”

DAPC leader Stephen Garvey praised his candidate’s character and background, as well as his grasp of the issues that will prove important to the voters of Bow River.

“Fahed brings to the DAPC and Bow River constituency a Canadian with relevant professional experience, high energy and initiative, and a proven track record of getting jobs done. Also, he has a strong passion for justice and fairness equally for all people,” said Garvey.
“Fahed is involved in various social issues with various communities. He understands the issues facing Canadians, including but not limited to First Nations, French Canadians, and immigrants. He understands issues involving the economy, foreign policy, immigration, Criminal Code, legislation, rural communities, and seniors. Fahed excels at interacting with the grassroots individual.”

The campaign for Bow River currently features four other candidates, including Martin Shields for the CPC, Mac Alexander for the Liberal Party of Canada, Lynn MacWilliam for the NDP, and Frans VandeStroet for the Christian Heritage Party of Canada.

The Advance will update readers if other candidates have been confirmed during the campaign.