Posted on November 5, 2015 by Vauxhall Advance 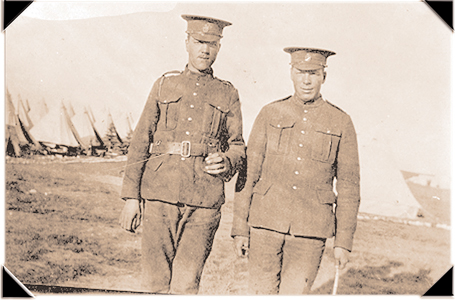 LEST WW FORGET: Raymond brothers Clarence and Earnest Betts served in the Canadian Army during WWI, seen here in this undated period photo.

Considered to be hallowed ground for Canadians, the slopes of Vimy Ridge in France hold the memory of a brutal struggle that scarred its surface almost 100 years ago, and represented a flowering of nationhood for a dominion that had now become a country.

Canadian war cemeteries dot the landscape of France, as do the cemeteries of many other nations, but it is the missing and unrecovered remains of soldiers killed in action that are becoming an increased focus for historians and researchers.

The recent discovery of a mass grave near Vimy Ridge suspected of containing unrecovered remains of Canadian soldiers killed in the battle could be the final resting place of a number of southern Albertans who were members of the Lethbridge Highlanders, including Private Ernest Earl Betts of Raymond, according to the research of a Lethbridge historian and high school teacher, Brett Clifton.

“He is known to be with these other men,” said Clifton. “They had a pre-planned cemetery, they knew where they were, but in the chaos of war, it kind of got lost and left behind.”

On April 9, 1917, the Canadian Corps, 100,000 strong, attacked the German stronghold of Vimy Ridge. The Canadians drove the enemy from the ridge, but losses were heavy: 10,000 casualties, including 3,600 dead. During the battle, the 16th Canadian Infantry Battalion, the Canadian Scottish (including elements of the Lethbridge Highlanders) attacked capturing all their objectives. One hundred of the 600 men were killed outright or later died of wounds sustained.

Canadian burial squads followed the attack, burying the dead in temporary battlefield cemeteries, including mine craters. Forty-four of the dead of the Canadian Scottish were buried in a mine crater in No Man’s Land, designated CA40. After the war, exhumation squads exhumed thousands of isolated graves, bringing them into permanent war graves cemeteries. CA40 was designated to be exhumed and moved to Nine Elms, but there is no evidence of any of the men from CA40 there.

“We know from historical records that there were supposedly 40 men who were in this tomb, and they were supposed to be relocated to a different cemetery,” said Clifton. “They usually took the battlefield casualties and brought them behind the lines to cemeteries that were less likely to be disturbed. When you go to the cemetery records, every one is accounted for but those 40 men.”

Searching all the likely cemeteries in the Vimy region also revealed no evidence of the Canadian Scottish graves. Military historian Norm Christie believes they remain where they were originally buried on the Vimy battlefield in 1917.

“He’s been the boots on the ground – he’s the one who actually did the discovering,” said Clifton. “But once I’d seen how many were from the Lethbridge area, I figured we had to do something to help out, and spread some awareness.”

In 2014, Christie, a Canadian Forces veteran, former Commonwealth War Graves Commission Record Officer, and military historian, located the site near Thelus, France, which was part of the original 1917 Vimy Ridge battlefield, where 44 previously missing Canadians are believed to be buried. Among these men are 10 members of the Lethbridge Highlanders.

“I believe he was researching one of the men involved – not one of the Lethbridge men specifically – but he came across the problem of these 40 people who were supposedly moved to this other cemetery, but weren’t accounted for,” said Clifton. “So upon further digging in the Commonwealth War Graves Records, he was able to to get the names of all 40.”

Of the 44 men believed to be in the mass grave, 10 of them are original members of the 113th Battalion CEF Lethbridge Highlanders – people from the region who went to war and never came home.

“Six are from the Lethbridge area immediately, a few are from Claresholm, one is from Raymond, and one is from Cardston,” said Clifton.

“All of those men would be on the Vimy Memorial, because they would be registered as having an unmarked grave.”

One of the missing soldiers, Private Betts, hailed from the Raymond area, enlisting with his brother Clarence on March 27, 1916 at age 26. Earnest Betts was killed in action at Vimy on April 9, 1917, and is believed to be one of the missing men buried in a crater where he fell. The brothers had been farming in the area before joining the Lethbridge Highlanders.

“I can tell you that him and his brother both enlisted on the same day, but they were a couple of numbers apart,” said Clifton. “Clarence made it through the war, but Ernest did not. I believe they still have family in the Coutts area.”

Efforts are underway to excavate the site, with the hope of identifying their remains and providing them with their long overdue burial honours.

“It’s a different sort of mass grave that usual, because it’s actually in the bottom of a mine crater, about nine feet deep,” said Clifton. “A shell crater might be two or three feet deep, this is significantly deeper. It’s not uncommon – there’s other Commonwealth cemeteries that are crater cemeteries that are the same circumstances. What is uncommon is to have a mass grave of 40, and 25 per cent of them be from the Lethbridge area.”

Clifton is helping spearhead a campaign to raise funds to have the mass grave exhumed and studied.

“The government doesn’t provide money for the exploration process, the government only takes care of the actual burial,” said Clifton. “What we’re trying to do is ascertain that the bodies are in fact there, and begin the process of recovering them. We know the location, plus or minus 500 metres.”

Clifton speculated on why this group of soldiers might never have been exhumed and buried in a formal cemetery.

“My speculation would be the heat of battle. All these casualties laying around, they needed to deal with them as best they can, but you have to think, too, are they going to risk their lives saving someone that’s already dead? It’s morbid to say, but in the heat of battle, it’s probably easier to put everyone in a hole and come back to it later.”

Nearly 61,000 Canadians lost their lives during the First World War and of these, an astonishing one sixth simply vanished and have no known grave.

“They’ll go through the forensic process of identifying which remains belong together,” said Clifton. “It’s a mass grave, so odds are it will pretty scrambled. Sometimes they’re able to identify remains based on material possessions that were found with them, dog tags, things like that. But it’s likely it will have to go to genetic testing to prove it, which is why finding families is so important. It’s been a policy in the First and Second World Wars that all men, regardless of their rank, are buried where they fell with their comrades. They’ll probably open a new cemetery. Something similar happened three years ago, the New Zealanders actually found a bunch of their men, and had to go through the same process, and they opened a new cemetery. So I imagine it would be something similar.”

The campaign to excavate the mass grave is hoping to raise $110,000 through donations.

“I just think it’s a really important and meaningful way that Lethbridge and area can contribute, especially leading up to Remembrance Day. A lot of people are looking to do things that actually matter, and this is something that is really significant, and I don’t think we’ll ever have the chance to participate in anything like this again,” said Clifton.

Clifton is asking anyone who might have information about these missing soldiers to contact him at 403-308-8548 or brett.clifton@uleth.ca. The project fundraising goal is $110,000 and progress can be followed online at https://fundrazr.com/campaigns/4zeCb. Donations can be made on the website using PayPal or credit card. Cheques can be made payable to Help Recover Our Vimy Heroes and sent to the following address: Help Recover Our Vimy Heroes, 54 Timberline Private, Ottawa, ON, K2G 6W9.