Posted on November 19, 2015 by Vauxhall Advance 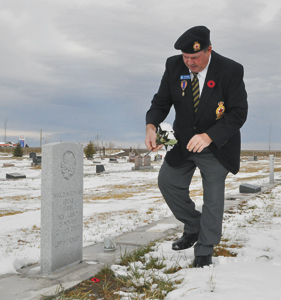 (Advance Photo by Greg Price) PAYING HIS RESPECTS: Ivan Locke of the Vauxhall Legion lays flowers at the grave site of his father Malcolm after Remembrance Day ceremonies at the Legion Hall. Locke was on hand along with members of his family to pay respects to those who served their country and their final resting place is the improved Legion Field of Honour Row at the Vauxhall Cemetery.

Grateful veterans and families alike who visited the Vauxhall Cemetery this past Remembrance Day ceremonies got to see first hand the improvements to the Legion Field of Honour Row.

It all started in June 2013 when Rita MacKenzie, senior program officer of cemetery maintenance of Commemoration Division/Direction Affairs Canada from Charlottetown, PEI, was contacted. She made a couple of trips to Vauxhall to access the job, and met with both the Vauxhall Cemetery Committee and the president of the Vauxhall Legion. In Fall of 2014, under contractor Murray Bexte, construction started with the removal of the veteran memorial headstones.

“All the headstones were removed, but due to the early winter last year, the project was put on hold until this spring,” said Kathie Friesen, a representative of the Vauxhall Cemetery Committee. “Great heed was taken by Murray and his crew with the removal operation, but due to the weathering and soil water erosion, eight headstones were damaged during the removal procedure. These were replaced by Veteran’s Affairs.”

The final phase of the laying of concrete and resetting the headstones was completed Aug. 8, 2015. The Legion Field of Honour row was a longer process then the regular concrete beams, as the upright headstones had to be carefully reset into the slots allocated for the markers, making sure they were at the same height of 32 inches and level, both vertically and horizontally.

“Veteran’s Last Post Fund, supplied two headstones for veterans that had passed away over five years ago and did not have a marker. One veteran of WWII, Alexander Adam Smid, passed away in 1963, and with the assistance of Southland Funeral Home, Taber and Ogema, Saskatchewan town offices, I was able to track down his information and ordered a headstone for his grave,” said Friesen. “The second headstone for Harold Barlow, also a veteran of WWII, was requested by his daughter and I contacted Last Post Fund. Both these headstones have been placed in the respective grave sites.”

Through a grant from the Lethbridge District and Community Foundation, 20 more headstones were placed on unmarked graves.

“We are grateful to the family members who acquired markers for their loved ones which were damaged or with no markers, to complete all markers for the 27 unmarked graves. We are also very appreciative to Southland Funeral Home for the assistance they provided the committee on this project,’ said Friesen.

The Vauxhall Cemetery Committee is on the final stages of the cemetery, with only two rows left to complete in Plot 1. These rows are in the older section, and many have the full cement cover. Rows three and four in Plot 1 have been completed, but approximately 18 headstones need to be replaced due to the deterioration of the letters and cement, and also the removal of the full cover.

“We are hoping that family members will assist in replacing the markers for their loved ones,” said Friesen.