Posted on February 11, 2016 by Vauxhall Advance 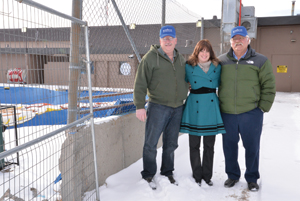 During the Vauxhall town council regular meeting on Feb. 1, council went over the numbers, as of the end of 2015, for the pool.

The pool itself, not including additional features such as the slide, costs $667,500 to build.

GST was not included in these numbers, since according to town administration, they often get it back.

The way the pool funding works is that, had the town received any grants, that money would be used towards the council’s portion of paying for the pool, to bring total the total town’s cost for the pool down to $200,000. This way, it would cost taxpayers less to build the pool.

While the fundraising effort has continued throughout January, as of the end of last year the town owed just under $20,000 for the pool itself.

Once the pool is paid off, they can move on to fundraise and pay for landscaping and fencing – which they will get quotes for once the pool has been built – and extras such as the pool accessories.

Council wanted to pay for the pool itself, and then start on paying for added features such as the slide and the beach entry – that way Vauxhall will have a usable pool and not just an expensive slide.

Some grant revenues are currently being explored for purchasing of the slide and the vortex.

However, it was brought to council’s attention that they would need to pay and order the slide within the next two weeks, since it would take 12 weeks for it to be installed, if they wanted to have it for Canada’s Day this year.

“So basically the question is (do we get the slide),” said Margaret Plumtree, mayor of Vauxhall, noting that they may run into fundraising issues then like they did with the new library.

“Once that it’s build, it’s not that people aren’t contributing, it’s just harder to get the money.”

“Once it’s all sitting there, your motivation to donate diminishes.”

If they don’t pay for the slide first, they can purchase the other features first, and install the slide at a later date.

“Kids want to be swimming; they need something to do,” said Kimberly Cawley, Vauxhall councillor. “That’s more important then a slide.”

Council will be getting another quote for the slide, in case it is more expensive to install at a later date.