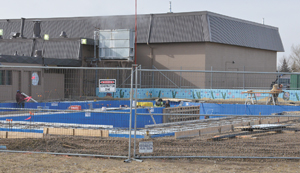 (Photo by Trevor Busch) POOL PARTY: Construction continues on Vauxhall’s new pool that is expected to be ready for the hot summer season for users to enjoy.

The latest numbers are in for the pool.

During the regular Vauxhall town council meeting on Tuesday, Feb 16, council met with a delegation from the Vauxhall Friends of the Pool Society, to go over the latest fundraising numbers for the pool.
Mayor Margaret Plumtree was absent from the meeting.

At the council meeting, council said that the total cost for the pool will be $877,500 – that number includes the actual pool build, accessories and fencing and landscaping. GST was not included in that number, since the town will get that back.

Currently, about $711,800 has been pledged or collected for the fundraising of the pool. Although the Friends of the Pool Society has a few more expected donations coming their way, the pool stills need approximately $145,000 in order to complete it, providing everything comes in on budget.

“(There’s) more to go, if we want to get all the bells and whistles in, but its a good start.”

Since chances are the slide, which is by far the most expensive add-on at $75,000, will not be installed by the time of the pool’s opening date of July 1, council also has to get a new quote on what the cost would be to install it at a later date, although it is expected to be about $5,000 more.

“Oil is going down but plastic hasn’t yet, so (the slide supplier) is confused on that,” said Chris Burns, CAO for Vauxhall. “He figured the cost of plastic, the slide should have gone down by now, but it hasn’t dropped at all.”

“It’s always a one-way thing,” said Philips. “If oil goes up, plastic costs more. If oil goes down, plastic does not cost less.”

If council orders the slide by the end of the week, the slide will be ready for Canada Day. But while council does not want to order the slide yet since they do not have the money for it, the society feels confident that they would be able to fundraise enough money for it.

“But for sure we have our supper, for sure we’re doing Canada Day, for sure we are doing Farmer’s Markets and for sure baseball tournaments, so probably that (amount) is easy, like not easy-easy, but close,” said Valerie Mattice, FotP society secretary. “It’ll be nice if we can just go for it.”

However, while the slide probably won’t be in by the opening date, other features such as the vortex will be installed and ready. Fundraising is still needed to pay for these features, which have already been ordered, but there is a chance of finding some savings with the slide.

“If we get someone to construct it, and he (the contractor) would supervise, we could save $6,000 possibly,” said Mattice, on building the slide’s access deck and stairs.

There is also the question of whether they should simply cover the entire area surrounding the pool with concrete or artificial grass. While quotes are being sourced, they can’t get total costs for landscaping and fencing until the pool is completed, since there is a few additional plumbing and electrical additions that would need to be finished up as well.

“That’s where this whole ‘landscaping, fencing, ectera’ isn’t just landscaping and fencing. It’s those plumbing and electrical details that have to be done to make this pool operable,” said Philips. “With any luck at all, the $100,000 (budget) will be a little high, it’s hard to say how high until you do it all.”

“We would, hopefully, like to keep fundraising and get another grant to do, and be able to do the fake grass, so it will be less maintenance,” said Mattice.

“We’re just trying to compare now to see what’s the difference between (concrete) and (fake) grass,” said Tammy Turner, FOTP society member. “Because you still have to prepare the land for that too, so it drains and everything.”

According to Mattice, the fake grass will be about $60,000, much to the surprise of council, although it would last for 15-20 years and can just be washed off to clean. She would rather have the slide now, and pay for the grass later.

“You said that people would not want to donate, once they have everything,” said Mattice.

“Well, we won’t have everything. We won’t have the fake grass or the tables. There’s still stuff to fundraise for after the slide comes.”
While the majority of the landscaping can be postponed to next year – the fencing and cement surrounding the pool must be done – council did not decide to order the waterslide just yet.