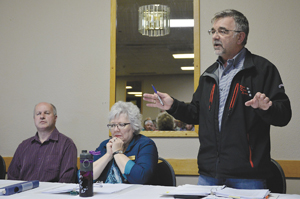 (Photo By Trevor Busch) FIERY DEBATE: Taber town councillor Joe Strojwas recounts his support for local volunteer firefighters during a public forum hosted at the Heritage Inn in Taber last week on the pending dissolution of the shared fire service between the Municipal District of Taber and the Town of Taber. Although invited by the town, M.D. of Taber council chose not to attend the meeting.

Lively debate over the future of the shared fire service between the Town of Taber and the Municipal District of Taber punctuated the public forum on the issue hosted at the Heritage Inn on last Wednesday.

A sense of the anti-climactic hung over the proceedings nonetheless, as M.D. of Taber council did not attend the meeting, although they had earlier been encouraged to attend and were invited by the Town of Taber. Town of Taber council, with the exclusion of Coun. Jack Brewin due to health concerns, were present at the forum. A large contingent of volunteer firefighters from the shared service, including fire chief Steve Munshaw, also attended the meeting.

The announcement earlier this month from the M.D. of Taber that the municipality would be terminating the current fire services agreement (giving a required one-year notice) with the Town of Taber and creating their own rural fire service in its place has caused a furor of debate and discord throughout the area between residents of both municipalities. According to the M.D., the new rural service is set to commence March 1, 2017, and will serve divisions 1-4 of the M.D. of Taber.

A show of hands early on in the meeting indicated the gathered crowd, which was sizable, was made up predominantly of M.D. of Taber residents concerned over the recent developments involving the shared service.

In his opening statements, Mayor Henk DeVlieger maintained in the town’s estimation, the previous fire agreement was fair and equitable to both parties.

“The town believes that the agreement that was signed by the M.D. in December is a fair and workable agreement, that had financial advantage to the M.D. as well, and most importantly, gives a top-notch rescue service with well trained, dedicated volunteers. They wanted the best of both worlds, a fixed contract, but still have complete control. It’s also very sad to see that the M.D. is justifying their decision with inaccurate financial information. In their official website hand-outs, which is very misleading, our agreement includes all capital. The M.D. in the 2017 budget has no capital in amortization. I guess equipment just falls out of heaven for free.”

DeVlieger was adamant the Town of Taber is still willing to negotiate with the M.D. to come to agreement satisfactory to both, rather than the alternative of dissolving the current shared service.

“We noticed, looking back, that they had this strategy already in place when we started our negotiations. They had already ordered equipment before we had even signed the last agreement. They want to move fast, because if you move fast there is no more way back. We still hope that we can sit down together with the M.D. and work this out for the best of both parties. United we are stronger — let’s set personalities and personal agendas aside. We’re dealing here with people’s lives. Can you put a dollar figure to that, or is there more to life?”

Opening the forum up to questions from the floor, town resident Jean Bullock questioned if the issue would result in raised municipal taxes without the financial contribution of the M.D. of Taber, a question DeVlieger indicated the town was still assessing.

Also speaking from the floor, former town councillor Garth Bekkering stated there was no doubt in his mind that the decision to dissolve the shared service would have a financial impact on municipal taxpayers.

“There’s no doubt in my mind that we have a top-notch fire and rescue service in Taber. But this is crazy. It’s going to cost everybody a lot more money. The question that was asked about taxation? Of course it’s going to go up, how much we don’t know. But I believe — rather than getting into the details of the financial issues — I believe that this situation we’re in is the culmination of several years of opposition between the two parties, the M.D. of Taber council and the Town of Taber council, that have disagreed on almost everything. I hate to say this, but personalities became involved with both parties, and when the trust is gone, there’s no more co-operation.”

Early debate ranged from the geographical area covered by the shared service and potential impacts to levels of service, to the possibility of implementing a regional fire service, or the ability to appeal the dispute to a higher level of government for possible resolution.

Another comment from the floor highlighted the ongoing negativity between both municipal councils in the past, and the need to be cognizant of the consequences of cavalier public discourse.

“What is the first rule of municipal governing, right after introductions? Don’t negotiate in the media. And that’s exactly what you’re doing, sir. Every time I open the paper, it’s derogatory, the M.D. is — I don’t even want to use the words. I don’t think you should be doing that. If you want them to negotiate, they’re staying quiet, as was said they don’t want us to know, but you’re telling us too much. Get together, get in a room, and duke it out.”

DeVlieger pointed out that while a closed door meeting to “duke it out” with M.D. of Taber council might pay positive dividends, municipal bodies are bound by the rule of law and due process.

“We would love to do that, but our Municipal Government Act has certain rules about what we can do, behind closed doors, or we have to go in open session. There are rules and regulations, and The Taber Times knows those rules better than we do. They’d love to see everything outside the closed door, but there has to be transparency, and this is one of them.”

Responding to a question from the floor, DeVlieger pledged to do whatever he could to prevent any deterioration in the quality of service currently being offered to residents of both municipalities.

“That has to be a council decision, but for myself, I cannot see how can we go down with our level. We’re dealing with people’s lives here. We have to do the best we can. To go down a level, if something goes wrong, I will never forgive myself.”

M.D. resident Tom Paterson, who earlier voiced his displeasure over M.D. council’s decision not to attend the meeting, encouraged others to take the issue back to their elected representatives.

“As far as I’m concerned, we’ve plowed enough ground here. The M.D. council is who you have to talk to. We elected them to take care of you — this is not about how much gravel or how often a grader comes down your road. It’s far more important, and I don’t think the horse is out of the barn. It’s never too late. They have an obligation to at least have a meeting like this to tell us why they’re doing it. So phone them and tell them we can’t do this without them — we need a better explanation than this. I want to hear from them.”

Frustration was voiced by a number of M.D. of Taber residents in the crowd about a perceived lack of awareness about a meeting between volunteer firefighters and other representatives and M.D. of Taber council on March 22.

Speaking about that meeting, M.D. resident Marten DeVlieger (an immediate family member of Mayor Henk DeVlieger) expressed dissatisfaction with the proceedings and the conduct of M.D. of Taber council.

“They just push you away. They want nothing to do with it, they do not want to talk, the stories change, it’s always drop it. Leave it, drop it, we’re done. All I can say is that an election is coming in a year-and-a-half.”

One suggestion that was not met unfavourably by Mayor DeVlieger was the possibility of taking the dispute through a mediation process to come to a resolution, possibly utilizing professionals through Alberta Municipal Affairs.

A comment from the floor suggested both municipalities, and both councils, have been equally responsible for a recent breakdown in relations.

Quoting Mayor DeVlieger from an article published in The Taber Times, in which the mayor appeared to make contradictory statements, a speaker from the floor suggested DeVlieger should be more wary of his public comments in future if he hopes to bring both councils back to the table in future to resolve the dispute.

“I don’t whether we should be grateful to The Taber Times for the work they do, or if they should be chastised, but I suspect that what I read in the paper — it’s the resource that we all gather from, and what we have access to — I suspect what I read in the paper is pretty accurate stuff, and I appreciate having access to it. I think, Mr. Mayor, you must appreciate the space that you’ve taken up recently in the press, and you need to know that your comments are taken seriously.”