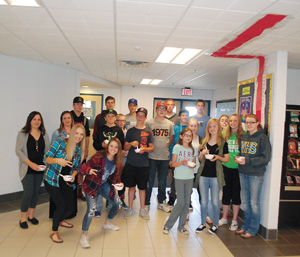 (Photo by Greg Price) CAT LIKE: The Cheetahs team from Vauxhall High School (pictured) was the top fundraiser for its We Day, an initiative through the Free the Children foundation, where money raised went towards clean water projects in Kenya. The school managed to shatter its initial goal as the thermometre graphic showed (top right), raising nearly four times the amount of their original goal. With so much generousity, the school decided to split the funds between the Kenya project and relief efforts for the Fort McMurray fire.

Vauxhall high school students had a mission — and they fulfilled it…and more.

“If we earned a $1,000, it would give water to a school for life,” said Nadine Schellenberg, to a packed assembly at the school last Thursday morning. “We’ve decided to donate $2,000 to the water project in Kenya which will give two schools water for life.”

With the nearly $2,000 that was left, Vauxhall High School has decided to give to the Red Cross to aid in recovery efforts from the devastating Fort McMurray fires last month.

The student body was divided into teams to meet fundraising goals, where the Cheetahs raised the most money, $793.50, for which they received a pizza party.

Free the Children was founded by Craig Kielburger when he was 12 years old. Craig was reading through the Toronto Star newspaper before school one day when he came across an article about the murder of a 12-year-old Pakistani boy called Iqbal Masih, a former child factory worker, who had spoken out against child labour.

Soon after, Kielburger established Free the Children with a group of his 12-year-old classmates. The organization was formed to raise awareness in North America about child labour and to encourage other children to get involved in the issue.

One of the group’s first actions was to collect 3,000 signatures on a petition to the prime minister of India, calling for the release of imprisoned child labour activist Kailash Satyarthi, who went on to win the 2014 Nobel Peace Prize.

The petition was sent in a shoe box wrapped in brown paper. On his eventual release, Satyarthi said, “It was one of the most powerful actions taken on my behalf, and for me, definitely the most memorable.”

Schellenberg read a passage from a representative from Free the Children to explain how the process works with using the funds received from initiative’s like Vauxhall High School’s.

“It’s hard to anticipate specifically which clean water and sanitation project we will be working on this summer in Kenya. However, we work with each community to determine which of the projects will be most beneficial to them,” said Schellenberg. “That ranges from boreholes to rain catchment systems to spring water systems. In the end, programming through the clean water and sanitation pillar helps educate community members on the importance of access to clean water.”