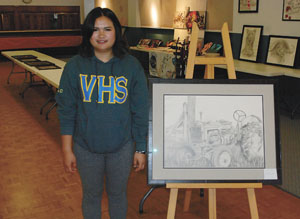 (Photo by Greg Price) BACK TO THE DRAWING BOARD: Ratchaneewan Chiangchan loves pencil sketching people, rural settings and animals. One of her creations can be completed within a week as time allows.

The event was entitled Get Inspired in Taber on Saturday, but for Vauxhall’s Ratchaneewan Chiangchan, she has been inspired ever since she moved from Thailand five years ago with her mother who married a Canadian.

“Canada has given me a good education. Everything is good, better than Thailand,” said Chiangchan who spoke extremely limited English before coming to southern Alberta. “I quite like Canada, I like the snow.”

Get Inspired at the Taber Legion was an opportunity for regional artists to show off their skills, be it through paint, pencil, song, musical instrument — or simply any form of expression that would inspire people to explore their more creative side.

Chiangchan was a featured artist with 14 pieces on display.

Seeing the attention to detail in her drawings, it is amazing to learn that the Grade 12 student really only started getting her inspired love of art when she first moved to Canada.

“I don’t count hours. But it usually three days, five days for a piece,” said Chiangchan.

Chiangchan bashfully admits school is not her strongest suit as she struggles with her english, but art has felt like a natural fit in expressing herself in other ways.

“It was an assignment in school from a teacher,” said Chiangchan of her first every drawing of a buffalo that started her on the road to her art skills in Canada three years ago. “I like everything, but I mostly do pencil sketch.”

Halloween is one of Ratchaneewan’s favourite times of the year, having done some inspired makeup and costume work, including a zipper face.

“I like creepy stuff,” said Chiangchan with a chuckle.

Chiangchan is happy to see organizers in Taber put on an event like Get Inspired that included both visual arts and an open mic for musical talents.

The Vauxhallite has also had a bit of an environmental message to some of her drawings as well. She points to one of her drawings involving a polar bear and its cub. The detail is exquisite, but when you look closer into the eyes, you see some hidden sadness.

“The baby bear, he look like he happy, but because he does not know what is going to happen with him, there’s no ice on it (global warming),” said Chiangchan.

“People say ‘oh he cute, he happy,’ but the background is not.”