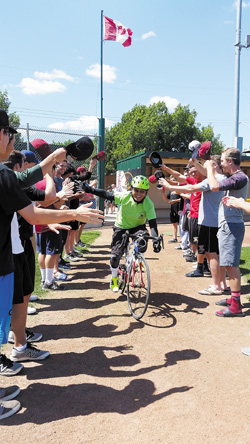 In the case of 79-year-old Yukio Kitagawa, you literally cannot keep a good man down.

Kitagawa has vigilantly been pursuing his goal since 2014 of cycling 100,000 kilometres in 10 years along the many pathways and street bike routes near his home in Calgary and around Vauxhall, for his Pennies for Ks campaign as a fundraiser for the Vauxhall Academy of Baseball.

That pursuit came to a screeching halt on the early morning of April 21, under the Ivor Strong bridge, when Kitagawa was taken out by a cyclist passing on his left who did not signal by voice or by bell, as is customary among cycling enthusiasts.

“If you don’t have a bell, you say ‘passing on your left,’” said Kitagawa of the mishap.

When Kitagawa regained consciousness, he was unable to put any pressure on his left hand to push himself off the pavement.

Not being able to get on his bike and moaning in agony, he pushed his bicycle about a kilometre home.

Eventually making his way to the physio clinic due to the kindness of a neighbour, Yukio was later diagnosed with a broken collar bone near the shoulder attachment to go along with four fractured ribs along with the scapula being broken as well.

“Seeing the injury, the doctor said I probably either fell on my handle bars or theirs with that type of injury to my ribs,” said Kitagawa.

Conservative estimates had Yukio having to be static for six weeks — those medical professionals obviously didn’t know Yukio very well.

“My son had an indoor riding bike he set up for me, and I was back on it after 14 days (from the accident,” said Kitagawa with a sly chuckle. “I rode with my sling at first and then I thought ‘the heck with that.’ For outdoor cycling, it was about 25 days, I’ve never been away from cycling for 25 days.”

Yukio loves many different sports, but according to his reports, being of small stature, he was always the guy that got cut from the baseball and hockey teams, so he decided to find his niche in more solitary pursuits.

Cycling has always been a love of Yukio’s, but so has powerlifting for which Kitagawa has been provincially and nationally recognized in various competitions and results. Still keeping fit with various workouts and lifting in a pared down variety as he inches towards his 80th birthday, there is poster of the recently departed heavyweight great Muhammad Ali in his workout room — quite appropriate as his collar bone break stung like a bee, but Yukio floated like a butterfly in getting himself off the canvass and continued to fly along on his bike way ahead of the regular recovery time to continue his Pennies for Ks campaign.

Kitagawa has served as a bench mark for the importance to stay active both mentally and physically for youth, adults and seniors. Yukio and his wife Barbara are very involved in the theatre community in Calgary, where the duo treat members of the Vauxhall Academy of Baseball to a production of A Christmas Carol every holiday season.

“People should get out and walk, or ride….just do something. I’ve been reading John Wooden (a UCLA coach who won 10 NCAA national championships in a 12-year period), and that was a character flaw in me earlier that you should have no excuses and blame whatever,” said Kitagawa. “You get in that notion of excuses and excuses and that’s no good. I think people at times do not have goals. I think it’s important that people set a goal and then they have something to go to. We work with seniors with the theatre in Calgary and a lot of people at that age don’t have a goal. It could be something like maintaining a lawn or a garden. If people don’t have goals to keep themselves active, they can go downhill in a hurry.”

Ever since, a 15-year-old Kitagawa was inspired by a young Reno Lizzi in Lethbridge that he would sell newspapers to.

In memory of Lizzi from his childhood, as the Vauxhall Academy of Baseball was formed 10 years ago, Kitagawa formed the Reno Lizzi scholarship/bursary in his name and has been a philanthropist of the academy ever since, having just recently concluded the Fifth Annual Celebration of Achievement earlier this month.

“The Vauxhall school was in trouble (with declining enrollment numbers) and with how important I think education is, I did not want to see a school go down,” said Kitagawa. “That’s how my wife and I got involved. The baseball academy was a way to get that enrollment back up.”

Part of the celebration earlier this month featured the recovered Kitagawa from his broken collar bone pedaling a historic kilometre into Vauxhall with his Pennies for Ks campaign.

Cycling on the outskirts of the Vauxhall Academy of Baseball, Yukio pedaled his 40,075th kilometre in his 100,000 kilometre quest by 2024.

That distance is the circumference of the earth, a heady accomplishment for someone even half of Yukio’s age. The feat was accomplished in 634 cycling days, over 2674 hours cycling.

With Yukio’s wife Barbara matching donations, after two years, the Pennies for K’s Campaign has managed to raise over $88,000.

“I’d like to raise a lot of money for the academy, but in the end what I hope the legacy is, is a player or a student or community member in Vauxhall sees it and pays it forward and helps people in any way they can,” said Kitagawa.

In reflecting back on how he formed his determined mindset of today Kitagawa recalled of how he had to grow up quite quickly due to the backlash and politics of World War II.

“When I look back, Dec. 7, 1941, that’s when Japan bombed Pear Harbor, and from that point on, things changed in my life,” said Kitagawa who will be celebrating his 80th birthday this October. “I was a little over five years old and there was the evacuation (of Japanese-Canadians), and from that point on I was thrust into doing things like hauling water for the family etc. In that process you were developing some form of determination, doing all these types of things at a young age.”

Living in Mission, British Columbia at the time with a father who had 10 acres of dairy farming/fruit farming, Pearl Harbor would forever change Yukio’s life path.

“When that happened (Pearl Harbor), everything changed. It went from comfort to a lot of discomfort. There was that realization, at the age of six, my schooling was very interrupted. I didn’t learn how to read and write until much later,” said Kitagawa.

With family being moved to Lethbridge where Kitagawa resided for 20 year starting in 1947, Kitagawa was made very aware how he was in arrears when it came to his education.

“It was age 27 when I went back to school and got my high school (GED) and I was really fortunate, a got a bursary to go to university and the reason was because I had a journeyman certificate in carpentry,” said Kitagawa, who would go on to be an industrial arts teacher for 20 years. “Looking back at that point with the importance of education, getting that bursary and getting to go to university, it brought me full circle back to the Vauxhall area, because now I could support a family properly. The determination and grit was developing all through that period.”

For more inspiring stories on people making a difference for the betterment of their communities, please see the special supplement ‘Harnessing the Giving Spirit” released this week featuring stories from across southern Alberta.