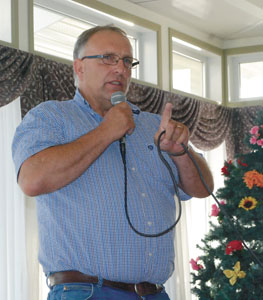 Information sessions hosted at Linden View to try and calm concerns over The Good Samaritan Society’s decision to award a five-year contract to PharmaCare to centralize pharmacy supports and services by going to a single provider, did not meet the desired effect for many.

Ryan Stempfle, vice president of clinical and pharmacy strategy for PharmaCare was on hand to do a presentation.

“I was very passionate about clinical pharmacy and the technology we were starting to get used to, to enhance the tracking of measured quality and continually improving that quality,” said Stempfle, adding the advanced technology gives patients safety with their medication in several quality assurance checkpoints. “The philosophy of PharmaCare is through community. We customize what we do with long-term care. It’s quite different than the walk-in pharmacy. We work with many groups across Alberta such as The Good Samaritan Society to continue to customize and enhance specific tools and services for the residents that we service.”

“That was important to us, in that it was provided by the Alberta Colleges of Pharmacy which is our provincial regulatory body,” said Stempfle. “We standardize our approach and philosophy to every site we work with, including physicians, nurses, residents and families. We commit to care conferences, we commit to being on site, both emergency and clinically. Our pharmacists are on site for a minimum of eight hours per week, every week.”

Along with doing continual monitoring of medication effectiveness, Stempfle added PharmaCare has a 24/7 on-call pharmacist, based in Lethbridge.

“We have developed an app on our cellphones so our 24/7 pharmacist has access to the medication information that you have when we are off site,” said Stempfle.

Stempfle continued on, to a packed crowd in the atrium of Linden View of concerned residents, their family members and local physicians and nurses last Wednesday in its 30-minute plus presentation, assuring quality service to Linden View residents who fall under the umbrella of The Good Samaritan Society, who had hired PharmaCare.

While the presentation was thorough, the crowd at Linden View still had plenty of concerns. Lack of consultation with invested stakeholders, be it Taber Co-Op pharmacy, who the current contract is with until Dec. 1, residents of Linden View or their families and the local medical community, was one of them. The five-year contract was awarded to PharmaCare with the regular tender process absent that Taber Co-Op pharmacy had to adhere to, according to Carin Jensen, clinical pharmacist for Linden View and pharmacy manager at Taber Co-Op.

“It’s mainly about quality. It’s not like a community like Calgary, but for a town, we have four or five pharmacies, so there’s really good competition to ensure quality,” said Taber resident Hans Visser. “Speaking as one of many volunteers at Linden View, I’m very disappointed that you are taking away the choice of the residents who deal with the pharmacist they are familiar with. You are willing to break up that long-term relationship. I hope you reconsider your decision, even though it already seems to be made.”

Municipal District of Taber councillor Dwight Tolton was on hand and has family that live at Linden View.

“I just want to let you know the centralization approach, I don’t know why you take funds out of Taber and put them in a distribution centre in Lethbridge. Small-town Alberta is having troubling times and people keep saying ‘this is the best’ in the cities and these key decisions are being made a long time ago without being discussed,” said Tolton. “People need to understand this, our jobs are leaving and going to the city.”

M.D. of Taber councillor Bob Wallace applauded the staff at Linden View with all the hard work they do, but also voiced his dismay in the lack of communication that got The Good Samaritan Society to where they are with PharmaCare without gauging feedback from affected parties in the care for the elderly.

“We seem to hear about situations after the fact and it’s always bad news,” said Wallace.

A concerned citizen who has three parents staying at Linden View wanted PharmaCare to confirm allegations floating around in the community that part of The Good Samaritan Society decision was to ‘reduce medication errors’ and increase resident safety as part of the disapointment with current provider Taber Co-Op who has the contract that expires in December.

“What I’m picking up from PharmaCare (in its presentation) is that there is an element of risk and lack of quality in the meds provided. I’d like to know is there something on record where there has been obvious failures in the meds provided to this facility,” she said. “Are there recorded incidences where our local pharmacists are messing up the meds and delays in people getting their meds? If we are going to a better quality program than the one here, that is for the sake of the safety of our residents. But if our local pharmacies are meeting the demand and there hasn’t been recorded incidents of problems, then I question, if there is no change in cost, why would you remove our local pharmacies if they are doing the job?”

Stempfle did not confirm any local problems, but added the technology PharmaCare can provide helps reduce human error.

“The main thing is, and I know, because I’m a pharmacist, mistakes happen. We have to be acutely aware of the evidence that is out there. We are continually stressing the importance of technology and innovation, enhance care in the future. The status quo is not acceptable,” said Stempfle. “Where we have suggested a decision has been made, it is based on best-practice evidence and applying it to all 32 sites. It’s trying to reduce variability. The technology helps us track, measure and assess the data with quality and integrity and continuously improve.”

A doctor from the gallery cautioned Stempfle on the catch phrase of efficiencies when it came to pharmaceuticals in getting what you wish for.

“If you take that line of reasoning, all the pharmacies will disappear. Your line of reasoning would wipe out our local pharmacy establishment,” he said. “We might not even be going with Edmonton, we may be going to Dubai if you want efficiency to that extent that will wipe out all our local infrastructure. You need to focus on what’s here and not shipping everything out.”

Wayne Smith, owner of Raymond Pharmacy was in attendance and spoke for Raymond, Cardston and Magrath for Good Samaritan Society contracts, which accounts for about 10 per cent of GSS sites in Alberta.

“I firmly believe the hometown pharmacy should do it because the staff know the patients, they love their patients. It’s their elementary school teachers, it’s their aunts and uncles and their neighbour that cuts their grass,” said Smith.