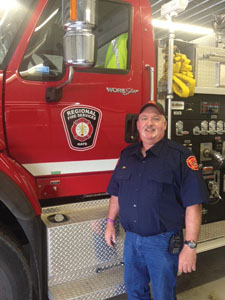 (Photo Submitted) FOR THE COMMUNITY: Hays Fire Chief Jim Yaroslawsky has been federally recognized for over 20 years of exemplary service with the Hays department. He began at the volunteer fire department in 1988, and became the fire chief in 2010.

Jim Yaroslawsky works hard volunteering at his local fire department, and now he has the medal to prove it.

The Hays Fire Chief has been awarded the Fire Services Exemplary Service Medal, for serving over 20 years with the Hays fire department.

“It’s a federal award given out to volunteer freighters that have donated or volunteered their time for 20 years,” said Yaroslawsky.

“It’s a nice achievement to have, and some recognition from the government — provincially and federally — they’re recognizing your level of service as a volunteer.”

His foray into firefighting started in 1988, when he first moved to the community of Hays to work in the oil and gas industry. His father was already a member of the Hays fire department in 1988, and the department had needed more volunteers.

“I was close to the firehall and stuff, and they needed young recruits back in the day,” said Yaroslawsky, who is now 52 years old. “I volunteered as a young man, and I stuck with the department now, getting close to 27 years.”

While it was initially a “family thing” in joining the department his father volunteered at, volunteering at the Hays department quickly became something he was passionate about, and he worked his way to deputy fire chief before becoming the Fire Chief for the volunteer fire department in fall of 2010.

“It was something I felt that I needed to do for the community. I’ve always been community minded and I don’t mind volunteering my time. It was something I felt we needed to have and be a part of, because it is a very valuable asset, the volunteer fire departments. People are going out and putting their own lives at risk to help the people in our communities, that we work with, live beside. It’s something that everybody should really consider, about helping out and contributing to the protection of the community.”

Yaroslawsky hasn’t received the actual award medal yet, as he was unable to attend the award ceremony at a conference in May. Yaroslawsky will be entered into the provincial directory of firefighters who have received the award, and his medal is on its way. Once it arrives, an award presentation will take place.

“It was like a sense of recognition, like there were other people out there — the government and other departments — that recognize the service that we do. Because, realistically, without the volunteers there will be no fire departments around out here,” said Jim Yaroslawsky. “It makes you feel good, a very good sense of accomplishment.”

Yaroslawsky looks forward to achieving the 30-year bar medal for exemplary service after a few more years. He has no plans of retiring from being fire chief anytime soon, and is currently looking for some new volunteers to serve in the fire department. The department is actively training, and a few volunteers have completed the level one Fire Fighting course, with a few more taking the level one and two courses later this year, which would come in handy should someone ever decide to pursue fire fighting as a profession.

“With their certification and passing, it opens the doors for them as well. If they ever were to move out of the community and pursue a job with any other fire department in the area, they’ll always have their certification showing, ‘Hey, here I am, I’m a level two certified firefighter’. That’s sort of my long term goal; is to see the young guys in the department and new faces come in and be developed and trained so they have all the resources they need to move on in the future, because they are the future of our local fire departments.”

Created on Aug. 29, 1985, the Fire Services Exemplary Service Medal honours those who have been members of a recognized Canadian fire service for at least 20 years, ten of which have been served in performance of duties involving potential risks, employed on or after the date of the medal’s creation and have shown to perform exemplary service during their years working with a fire service.