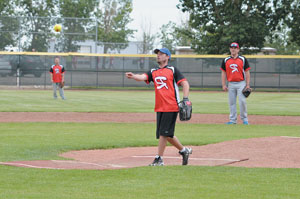 (Photo by Trevor Busch) MOUND MAGIC: Pitcher Jay Christensen of Team Ridiculousness, whose players largely hail from the Lethbridge/Picture Butte area, tosses in a pitch to an opposing hitter from the Juglovers dur- ing the 2nd Annual Jets Stadium Society Slo-Pitch Tournament on Saturday afternoon at Jets Stadium. Team Ridiculousness went on secure the “B” Division in the tournament.

Baseball lovers descended on Vauxhall last weekend for the Jets Stadium Society’s Slo-pitch Tournament. While it was the second year the event was managed by the society, the 30-year history behind the Vauxhall tournament had spectators and players alike all to eager to play ball.

“It’s definitely a mix; there have been some teams playing in the tournament for 30 years — like generational teams,” said Rikki Lee Gavin, a tournament organizer and JSS member. “We also had teams coming from Taber and Lethbridge, who play in the leagues there, and teams from as far away as Olds and Calgary, who play in slowpitch teams there.”

New this year to the tournament was a Home Run Derby, which saw 21 males and six females competing for a 50/50 pot in their respective categories after paying a $10 entry fee. Jordan Wong, an alumni of the Vauxhall Baseball Academy, took home the male pot, and Caroline Waddle took home the female pot.

Although the final funds have not been tallied yet, proceeds from the tournament will go towards the purchase of an infield tarp for the Jets Stadium.