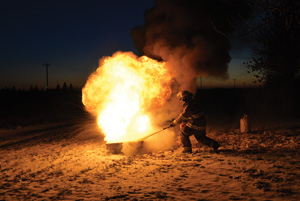 (Photo by Nikki Jamieson) SAFETY FIRST: In gear, Vauxhall firefighter John Martens demonstrates how to put out a gasoline fire with a fire extinguisher, during the Vauxhall Regional Training Facility open house at the Vauxhall fire station on Tuesday, Oct. 11.

“(Oct. 11) was suppose to be the grand opening of our regional training centre, but Mother Nature didn’t corporate with us,” said Brain Schafer, Vauxhall regional fire chief. “So, we’re moving it into the fire hall (Oct. 11) to do some of the activities. Later on, when the weather turns nicer again, we’ll invite people to come out there and tour the facility. We’ll still go out there (that evening) to cut the ribbon and to show councils what has transpire and the completed projected.”

Due to the cold and snowy weather that came over the weekend, the barbecue was held at the Vauxhall Fire Hall, where Vauxhall firefighters cooked up hotdogs and hamburgers for family and friends. Afterwards, Schafer, Municipal District of Taber councillor Bob Wallace and M.D. deputy reeve Dwight Tolton thanked everyone for their hard work and dedication before the first ribbon was cut.

People were then invited to head over to the new facility just north of town, where they got a tour of the facility and were treated to a maze demonstration before the ribbon was cut a second time in front of the facility. Attendees then headed back to the fire hall, where the fire extinguisher demonstrations finished off the night.

“It’s been a long time coming,” said Schafer. “The volunteers from all the departments are really excited and can’t wait to get in there to start playing with it.”

The facility is the result of two-years of work, with firefighters and people from around the M.D. volunteering their time to help get the building up and running.

“We’ve always been looking to take our training to the next level, but to do that, you need somewhere, again, safe. When this came about, I just happened to be in a meeting — right place, right time — they were talking bout tearing down a building, and I asked them what they were talking about, and they said the old water plant. Again, it’s safety for us, we’re sheltered, we’re inside. I don’t have to go out and look for old farm buildings or old houses to play inside, to train in there. Because again, it’s not safe.”

The building has no utilities, to help lessen the risk of accidental shocks and such when practicing putting out fires. In addition to the maze, the building is equipped with Foggers — a dry ice smoke machine that simulates smoke from fires — as they cannot light actual fires due to safety concerns and fire simulators — TV screens that simulate fire that is extinguished when you put water on it. The facility continues to the outside, where they can practice vehicle extraction.

Ultimately, the goal is for the firefighter to practice and be prepared for real life situations.

“So when the call comes in, you know what to do, right from rolling up to the scene to placing your signs on the highway to cutting somebody out of a car. The more we can do this, the more repetition, the more it’s going to come natural for the guys and ladies, and that’s what we’re looking for; expand that level of knowledge and practice it as much as we can,” said Schafer.

“If you’re going to panic, this is a great place to do it, because nobody in here can get hurt. So, work all those bugs out of yourself, to make sure you can actually do it.”

The building itself was done in partnership with the Regional Water Authority, M.D. of Taber and the town of Vauxhall. The maze was purchased through casino funds, the fire simulator purchased with funds from the Vauxhall Stock Raising Association, received a few years ago, and the department had received $10,000 from Canadian Natural Resources Ltd. two months ago for future training equipment.