Yukio proves to be 80 years young with cycling benchmark 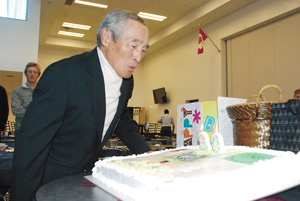 (Photo by Greg Price) BIRTHDAY BOY: Yukio Kitagawa blows out the candles to his birthday cake celebrating his 80th birthday at the Vauxhall High School. The celebrations, which included a roast-beef dinner, saw Kitagawa breaking the 50,000 kilometre bench mark in his cycling Pennies for Ks campaign. For those who would like to donate to the fundraiser, they can do so by receiving a copy of the pledge form by contacting Lynda Unruh at 403-654-2145 or by e-mail at lynda.unruh@horizon.ab.ca.

For most people when they celebrate their 80th birthday, it involves a nice dinner, maybe a little wine and a piece of cake with family and friends — but not Yukio Kitagawa.

Kitagawa decided to celebrate his 80th birthday by cycling into Vauxhall for the 50,000th kilometre of his 100,000 kilometre goal for his Pennies for Ks campaign in support of the Vauxhall Academy of Baseball.

Kitagawa originally set the goal back in September 2014 where he hoped to finish his 100,000 kilometre goal by his 88th birthday.

Despite two falls off his bicycle, including fractured ribs and a broken collar bone in one of his spills, Kitagawa has soldiered on at an accelerated pace, reaching the halfway mark in less than a third of the time he has allotted for himself.

“I’ve sped it up because I wondered if age was going to get me,” said Kitagawa with a chuckle, shortly after crossing the 50,000 kilometre barrier in front of Vauxhall High School. “The next 50,000 will be a little more prolonged because I’m going to ease up a little more. It’s been great, we’ve had good support with people becoming more aware with the campaign.”

A young 15-year-old Kitagawa was inspired by Reno Lizzi in Lethbridge that he would sell newspapers to.

In memory of Lizzi from his childhood, as the Vauxhall Academy of Baseball was formed 10 years ago, Kitagawa formed the Reno Lizzi Scholarship/Bursary in his name and has been a philanthropist of the academy ever since. Reading how the academy also served as a way to halt the declining numbers of the rural Vauxhall High School, combined with Reno Lizzi’s love of baseball, Kitagawa thought the endeavour had a good synergy to devote his philanthropist efforts to. That includes the Pennies for Ks campaign that fits right into Yukio’s thirst for physical fitness alongside his wife, Barbara. Small in stature, but big in heart, along with a love of cycling, Kitagawa still power lifts to this day in a scaled-down variety, having been provincially/nationally recognized in the past.

“People have to get out of the habit of sitting around. They got to get up and do something. It doesn’t have to be cycling, it could be going for a nice walk in the park,” said Kitagawa. “I enjoy cycling because it’s easy on the knees. I know it can be tough at times to stay motivated. I find when I take a day off, you can get lazy. But once you get out there, you can’t wait to do it again.”

Yukio and Barbara have been exercise enthusiasts since a young age, which Kitagawa attributes to helping slow down his aging process.

“I just feel younger with energy. It (exercise) gets easier if you establish a routine.”

That energy has allowed Kitagawa to cycle the circumference of the earth which accounted for 40,075 kilometres of the 50,000 kilometres he had pedaled for the Pennies for Ks campaign, which the Kitagawas match every donation with matching funds.

Yukio is hoping to do a cycling rally with the Vauxhall Elementary School kids as well to raise awareness not only for the Pennies for Ks campaign, but to keep kids and adults active.

Yukio’s family was on hand to mark his 80th birthday milestone where later on there was a short program and a roast beef meal offered up at Vauxhall High School.

Kitagawa gave a speech to the crowd, noting advanced birthday celebrations like Yukio’s last Wednesday can make a man think about his own mortality.

“I’ve reflected on those thoughts in recent days and I feel fortunate that I am still standing and am lucky to enjoy this special day,” said Kitagawa to the crowd, noting as an eight-year old during Christmas break 1944, he was afflicted with a near-fatal case of pneumonia as the antibiotic penicillin was not mass-produced for civilians until 1945.

That second-lease on life thanks to devoted health-care professionals led to Yukio eventually marrying his wife Barbara in the 1960s and eventually becoming qualified to become a teacher at age 31 after getting an education at the University of Alberta Faculty of Education with three sons in tow.

“In 2005, it seemed somehow to give me some direction, for at the age of 69, we were led to Vauxhall, an opportunistic landing,” said Kitagawa. “After spending some 19 years volunteering at seniors organizations, now there was an opportunity to be involved in provincial young leaders of tomorrow where in 2006 we founded the Reno Lizzi Scholarship Program with the Vauxhall Academy of Baseball. On Sept. 1, 2014, we launched the Pennies for Ks Fundraiser with pledges for every kilometre cycled. This evening, I am very honoured to experience a very happy landing being here in Vauxhall, acknowledging and engaging in a communal atmosphere of a 50,000 kilometre goal on my 80th birthday.”