Posted on November 3, 2016 by Vauxhall Advance 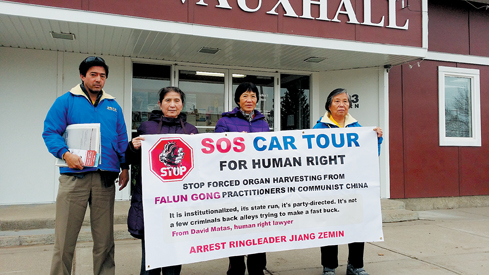 RAISING AWARENESS: A small group of Canadian practitioners of Falun Gong demonstrate outside the Vauxhall town office on Tuesday, to bring to light the plight of its followers in China who have been subjected to human rights violations and organ harvesting. TIMES PHOTO SUBMITTED

A nation-wide movement made its way to Vauxhall on Tuesday to raise awareness of the plight of persecution of Falun Gong practitioners in China, resulting in the slaughtering of its followers for their organs in a lucrative billion-dollar market.

For Falun Gong, it is estimated there is between 70 to 100 million Chinese people practising Falun Gong.

Although the practice initially enjoyed considerable support from Chinese officialdom, by the mid to late-1990s, the Communist Party and public security organizations increasingly viewed Falun Gong as a potential threat due to its size, independence from the state and spiritual teachings.

On July 20, 1999, the Communist Party leadership initiated a nationwide crackdown and multifaceted propaganda campaign intended to eradicate the practice. It blocked Internet access to websites that mention Falun Gong, and in October 1999 it declared Falun Gong a “heretical organization” that threatened social stability.

A person’s xining is affected by their ratio of virtue (positive energy) to karma (negative energy). Virtue is generated through doing good deeds and suffering, while karma accumulates by doing bad deeds (Los Angeles Daily News 2014).

The SOS Car Tour camped itself in front of the Vauxhall town council administration building, where a handful of Canadian Falun Gong followers pleaded their cause to raise international awareness of China’s string of human rights violations. The tour is also calling for former Chinese leader Jiang Zemin, the main perpetrator responsible for the persecution, to be brought to justice.

“We have been going Canada wide, we have been in all the major cities and even small towns in Canada,” said Michael Wing, a volunteer with the Falun Gong Association touring group. “This is our last leg of Alberta where we have gone to every single small town in Alberta and the response has been overwhelmingly good. We are used to freedom here, but we have a government in China that is communist. It is freedom that they are afraid of, freedom of speech, freedom of assembly. If there are 100 million Falun Gong practitioners, that outnumbers the people in the Communist Party. The government is paranoid about this type of thing even though they (Falun Gong practitioners) are peaceful.”

Among the protesters on Tuesday in Vauxhall was 72-year-old Jinling Huang, who was arrested and sent to labour camps for over one year in 2007 for practising Falun Gong.

“I did not want to give up my own belief. Immediately after getting into labour camps, I was heavily beaten up by drug addicts (in the labour camps),” said Huang, through an interpreter as part of a protest in Taber in early October. “Even now, my knees are injured. I still cannot walk properly.”

Huang achieved refugee status in 2008 and came to Canada. But, her daughter Yinghua Chen, also a Falun Gong practitioner, is still in prison today.

“In 2014, she helped out a daughter of a Falun Gong practitioner to take a photo on the street. The father is being jailed for practising Falun Gong and being sentenced for 12 years of imprisonment,” said Huang.

“The girl wanted to see the father, so my daughter helped to take a picture to post online and she was subsequently arrested. All the girl was doing was holding a banner saying ‘I want to see my father.’ My daughter was sentenced to four years’ imprisonment. She is still suffering in jail. She was tortured early. She was hung up and beaten in jail. We held a few press conferences in Calgary to get help from an MP, when the government made some voices, my daughter’s situation got a bit better. We hired a lawyer to help my daughter, but the lawyer was subsequently arrested. There is nothing like this in this world, but in China it is real.”

When Huang was young, she claimed she had a lot of chronic diseases involving her heart and liver. With local hospital care proving to be unsuccessful she turned to Falun Gong when her state improved.

“It is very good exercises and it helped me recover. It taught me to be a good person and follow the principles of compassion and tolerance,” said Huang, adding she found it peculiar she and her daughter went through blood tests while other non-practising prisoners did not while in prison.

“She actually called the prison her daughter was staying at.What happens when we get this type of publicity is they treat her better. They don’t beat her, they don’t torture her,” said Wing. “This is why raising awareness is so important.We want to bring attention to these people’s stories.”

The researchers estimate up to 1.5 million Falun Gong practitioners have been killed since 2001 in this illegal, state-sanctioned organ-trafficking practice.

The investigators of the report are in Ottawa today to speak to the subcommittee of international human rights, for a presentation on the report’s findings.

“There are some shocking, shocking findings. I had no idea it was as bad as it was, and I’ve been volunteering and studying this for 13 years and I had no idea,” said Wing. “To sum it up in a nutshell, they are saying between 60,000 to 100,000 killed per year since 1999. For organ harvesting, that is genocide. They rip out their organs, which includes hearts and lungs. It’s based in the labour camps where they have hundreds of thousands of practitioners. They blood test them and tissue match them, cataloging their organs as a live organ bank.”

“In any other country, you have to wait months and years to get a new organ, in China, they measure it in days and weeks. It’s disgusting,” said Wing.

According to fees advertised on China International Transplant Assistance Center website, prices for certain organs are listed including cornea ($30,000), heart ($130,000-$160,000), kidney ($62,000), liver ($98,000-$130,000) and lung ($150,000-$170,000). CITNAC was founded in the transplantation institute at the First Affiliated Hospital of China Medical University. Its website was shut down soon after organ harvesting was exposed, although a link is still provided to the archived page.

Wing is encouraging Vauxhallites and Canadians to write to their MLA or MP about illegal organ harvesting in China. Federally, Prime Minister Trudeau can be reached at pm@pm.gc.ca or Minister of Foreign Affairs Stephane Dion can be reached at stephane.dion@par.gc.ca. A petition to the Canadian government can be signed at bit.do/stop-organ-harvest. Past investigative research was referenced at organharvestinvestigation.net and ethan-gutmann.com/the-slaughter/. Award-winning documentaries can be found at humanharvestmovie.com and at hardtobelievemovie.com.