Posted on December 8, 2016 by Vauxhall Advance 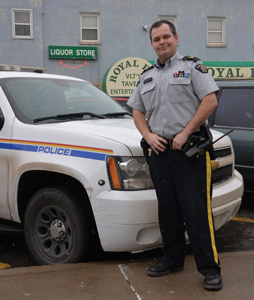 When Cpl. Kirk Hughes was young, he wanted to do two things when he got older; serve and explore Canada, particularly the northern regions. Joining the RCMP allowed him to do just that.

“I wanted to travel, actually I wanted to go to the north, to serve in the Northwest Territories in one of those territorial communities, and the RCMP is the only agency that does that,” said Hughes. “So that was the big motivation to join the RCMP.”

“When I was a child, I grew up, I did a lot of reading. Pierre Berton had done some fabulous books about the (Klondike) gold rush… And it was just the romantic idea of the North and the frontier, and being out in these isolated, small First Nations communities, and as a child it really appealed to me. And when I got older to follow that dream, it was one of the first things I wanted to migrate towards, it was that northern experience. And I’m glad I did; it was everything I thought it was.”

In his 10 year career with the RCMP, three of the previous five postings he’s had were in the Northwest Territories.

Originally from Ontario, he was stationed in Portage La Prairie, Man., for three years, before heading back to Ontario to work as the EMS coordinator for the RCMP during the G20 and G8 summits in 2010.

From there, he was transferred to Deline, NWT — a place he “absolutely adored and loved”, and tries to visit as often as possible — for two and a half years, then heading to Fort Providence, NWT, for two years, and then to Behchoko, NWT, for two years.

“I enjoyed all my northern postings, Behchoko is definitely one of my favourite ones, but Deline is the gem of the Sahtu, I love that place. It’s a fantastic pro-police community, very traditional, it’s a fly-in community — so you have to take a plane to fly in there — about 300 people in it.”

While he loved working up north, Hughes and his wife have two young children, and there wasn’t a lot for the family to do together there. Then about one year ago, a posting came up for a position based in Taber.

“My wife had done some research, and Taber reminded her of her hometown,” said Hughes.

“It had the same kind of atmosphere, same kind of community feel. And now that I have two children, four and a two year old, my wife really wanted to get involved with the community sports, get involved in some of the community educational programs — the library for example — and she was a very big component of that. And the two of us decided that the North — we were there for almost six and a half years — you could only stay there for so long. And this place seemed to fit the bill of what we wanted and what we needed for the children, and it reminded her of home, so it was an easy fit.”

Hughes successfully applied for the position, and he started at the detachment in August, as the Operations and CO for the Taber/ Vauxhall RCMP. He is also the Acting Detachment Commander while the current commander is off on leave.

Besides the noticeable difference in the weather, working alongside another police department is a new experience, as up north there is only the RCMP.

“I’ve never had another police force to work with. That has been a great learning experience, and, so far, I have enjoyed very much learning different things about the municipal policing side, and just working with another partner agency.”

He has also been doing more highway work, as highway accidents don’t happen that often up in the Northwest Territories. The farming atmosphere is also very different.

Working for the Taber/Vauxhall detachment has made him be more prepared. With a large area to cover with more people spread out instead of being concentrated within one area, he can’t just run back to the station if he forgot something.

“I’m used to the isolation and the large community areas I’d police in the north. Everyone really just lived in a small community, and we’d have lots of empty land all around us that we’re still in charge of, but we didn’t get a lot of calls to some of these remote fishing camps for example,” said Hughes. “Here, we’d regularly go to places like Enchant and Vauxhall and Hays, Grassy Lake, and I was in Wrentham yesterday.

“I plan more now, than I did in the North, because I didn’t have to. In a typical day like today, I could go anywhere in the Taber/Vauxhall area, and in the North I only had to worry about eight or ten kilometres from the detachment, so if I needed something, chances are someone can run it out to me,” said Hughes.

“Here, right now my police truck has got everything I would need for an extended eight-hour shift anywhere in the communities. So all my equipment is with me… more stuff than I would have carried then in the Northwest Territories, simply because of the area. I can’t go to Enchant and then call and look for a battery, because who is going to bring up a battery at that time?”

Outside of work, Hughes and his family are taking advantage of the activities Taber has to offer. His sons are currently taking horseback riding lessons, swimming lessons, taking the PPE course at the Agri-Plex and spending as much time as possible at the local library. The family has also been taking trips out around the area and visiting the local craft markets.

“It’s just the experience, the stuff you wouldn’t have the chance to do in the North. Going to Christmas parades for example,” said Hughes.

“There’s all these activities that we’re involved, and that usually takes most of my time up, when I’m not working. That’s usually what I’m doing, entertaining them and finding things for them to do and getting involved with what they’re in to.”

“Just the overall sense of community that is in the community — the Taber and the M.D. of Taber. Just that community involvement and community rapport, it’s really cool to be apart of that, or coming to get to be a part of that.”