The hunt is on this Saturday for Easter fun 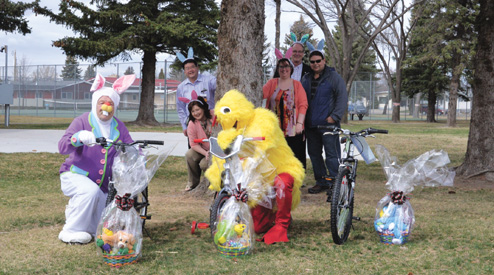 Warm up those running shoes, the annual Easter Egg Hunt is back.

The Easter Bunny has already done a dry-run through of the park and, with the help of his sponsors The Taber Times, Taber Co-Op, the Heritage Inn and Taber Kinsmen Club, is ready to hide 14,000 eggs in Confederation Park in Taber in time for the 19th annual Egg Hunt on Saturday, which will start at 10 a.m. sharp at Confederation Park. That’s 2,000 more chocolate eggs to be found than last year.

“Because there’s so many kids that come, you just want to make sure that everybody has a chance to get some eggs,” said Rob Yokoyama, manager of the Taber Co-op. “Have a strategy, and try to pick one of those plastic eggs first, because that’s where you have a chance to win one of the basket (prizes).”

“I think just the sugar,” said Daryl Sims, general manager of the Heritage Inn, of the appeal of the chocolate prizes this year, adding there is 100 chocolate rabbits available to be given out. “It’s a treat kids get at Easter time that they don’t get any other time of the year.”

The park will be divided up according to age groups for the hunt, so no one gets bowled over or snuck past when it comes to collecting eggs. Ages four and under will be finding eggs in the south part of the park by the playground, 5-7 year olds will be in the centre section and those 8-10 will be in the northernmost part of the park.

Participants are asked to register for the bike draw before it starts, so they can get their ballot into the prize draws before 10 a.m. Registration begins at 9 a.m.

For those who would rather just watch the hunt, refreshments will be available in the form of coffee, juice and donuts — what is Easter without sugar after all — to enjoy while you watch five-minutes of chaos as kids hunt down every last egg with single-minded determination.

“It is quite the spectacle with the thrill of the hunt,” said Greg Price, editor at The Taber Times. “Seeing all those kids at the starting line in anticipation, it’s a great family event where parents help the younger ones get their chocolate treats where it is a bit more of a speed race with the older kids. It’s an extra for families to spend time together in their Easter weekend.”

Taber Emergency Services will be there with their equipment and fire trucks, giving kids a chance to see it up close, and to provide crowd control for they will be on hand in case crowd control is needed for when the holiday’s special celebrity, the Easter Bunny himself, makes his appearance.

A series of prizes, including three bikes donated by the Kinsmen Club, are available to be won in a series of draws. One bike can be won in the four and under group, one in the 5-7 year old group and one in the 8-10 year old group. Just remember, all ballots for the draw must be in by 10 a.m., before the hunt starts, and you must be present at the time of the draw, if you want to claim your prize.

“It promotes exercise with the kids,” said Glen Wada, member of the Kinsmen Club. “It’s just like the park; it’s getting out and doing some activities in your community, it’s what we’re all about.”