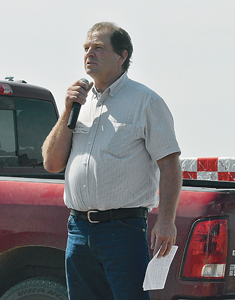 Those are just two of the initiatives confirmed recently by more than two dozen signatories to the ground-breaking Southern Alberta Water Charter. Alberta’s Minister of Environment and Parks, Shannon Phillips joined Mayor Chris Spearman, University of Lethbridge president Mike Mahon and representatives from many communities for a signing ceremony at city hall, organized by the Oldman Watershed Council.

Students, faculty and staff at the U of L have played “a very active role” in encouraging sustainability in water use across southern Alberta, Mahon said.

“The U of L has established itself as a leader in water research through the Water Institute for Sustainable Environments,” he added.

Now Joseph Rasmussen, its Tier 1 Board of Governors Research Chair for the biological sciences, will guide a new study of water stream temperatures as they impact trout in the Oldman River watershed.

A drone-mounted sensor will identify cooler and warmer water zones in the watershed, critical for the species’ summer survival and spawning.

Spokesperson Antoine Gendron described how he and his colleagues in a U of L liberal education program will conduct soil and water tests in a section of the Oldman near Taber, document its plant life, take note of any vandalism – and pick up accumulated garbage.

“We’re hoping our project will help bring awareness of local watershed issues to people in the region so they might become more careful in their use of water,” he said.

Reeve Brian Brewen followed up by announcing the MD of Taber will be building a new boat launch site on the river, improving recreational and emergency access.

The municipality is also collaborating with neighbouring jurisdictions on an improved stormwater management plan, he said.

Touting the quality of the city’s drinking water, Spearman said high-visibility “hydration stations” will be opened during events in Galt Gardens and Henderson Lake Park this summer. Participants can bring a reusable container instead of throw-away plastic bottled water for a cool drink.

Public buildings and private businesses will also be encouraged to join the initiative. The city must be proactive in protecting its water resource, Spearman added.

“Every municipality in southern Alberta should sign on,” he said.

While town councils in Coalhurst, Magrath, Nanton and Vauxhall have signed on – along with Lethbridge County, the MD of Taber and the Village of Nobleford – watershed council members hope larger communities like Coaldale, Taber and Fort Macleod will get involved as well.

In Pincher Creek, while both St. Michael’s School and Matthew Halton High became charter members, the town did not.

Family groups, businesses, environmental societies and children’s services – from Serendipity Childcare and Park Meadows School to the 14th McKillop Scouts – were also among the first signatories.

For its part, Phillips said, the Alberta government has committed $100 million to providing safe drinking water in First Nations communities, and it’s providing multi-year funding to watershed councils so their work can continue as planned.

She also praised the university’s initiative.

“It is so critical that we have research and monitoring going on in our streams,” she said.

Her environment department’s staff, Phillips added, is working to ensure all Albertans have access to healthy outdoor experiences.