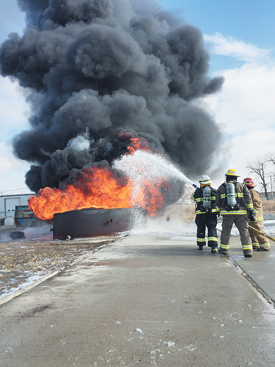 If you see someone in a green helmet running around with an M.D. of Taber fire crew that’s looking a little young, there’s no need to panic; they’re just getting a head start on training.

During their regular May 9 meeting, the Municipal District of Taber council discussed the creation of a junior firefighter program with the M.D. Regional Fire Department chief Joe Bruyere.

According to a draft version of the policy, “The Junior Firefighting Program was instituted for young men and women, aged 16-18, interested in preparing to become active firefighters upon reaching the age of 18”. A junior firefighter would serve in a support role for the senior firefighters during actual emergencies, with the program acting as a supplement for the formal firefighting training program.

“They would be assigned to a senior member on site, they wouldn’t be allowed to run on their own,” said Bruyere. “To also help us identify who they are, they are going to be issued green helmets, which is outside of our colour scheme. That way, anyone with a green helmet, if they’re walking by themselves, we can deal with it quickly. Just a few things we put in, to help us identify who they are so we don’t accidentally grab them to do something they’re not trained to do.”

A youth will be eligible for the program if they are between 16-18 years of age and are a resident of M.D. of Taber Regional Fire Department or Vauxhall Regional Fire Department response area. They must be of good academic standing at their school, and maintain a minimum grade point average of ‘C’, or 2.0, during their application time and membership as a junior firefighter.
All applicants must complete an application, which includes passing a medical authorization and police background check, with signed parental consent by their parent or legal guardian, and their application must be approved by the corresponding fire station chief.

“We are allowed to train them at 16, and we can test them at 17 to a full level two standard. But, the policy straight up says, that although they will be trained to the full standard, they are not to be entering a structure fire, so they wouldn’t do an interior attack, even with a senior member with them. I just, an under-aged person should not be in that heat.”

A junior firefighter will be allowed, however, to assist with an exterior attack of a fire.
In order for a junior firefighter to be able to respond to a fire “at this time”, chances are they will have to be attending a meeting or something at the fire hall, as they won’t be issued radios or other communication device. While part of it is due to costs, it is largely because they want to ensure the youths in question are ready before they face their first emergency situation as a responder.

“At 18, if they choose to continue… at that point they’ll be fully trained at 18, we could issue all the right gear then at that time.”

According to Bruyere, the fire commissioner says they are allowed to train and test youth provided they obtain parental permission first, and their insurance for firefighters will cover the youth at no additional charge. All fire chiefs from the M.D. and Vauxhall departments like the policy, with potentially three youths interested in joining under the Hays department banner.

“The nice thing is when they’re 18, they’re ready to roll,” said Dwight Tolton, deputy reeve for the M.D.

Although right now the program would be done within the fire halls, Bruyere says they will look into expanding the program into schools later on. Coun. Bob Wallace wondered how that would work with the volunteer fire halls, with Bruyere adding that as typically, work experience through schools is done during typical daytime hours, it will need to be further explored.

Additionally, they would have to look for certain types of individuals, and not just someone who, as Wallace put it, is looking for “three credits”.

“I want to have actually, somebody who is interested in, you know, filling the ranks for the future, which is basically what I’m looking for,” said Bruyere.

Coun. Tom Machaek questioned the level of time commitment the youth would need to have for the program, and whether or not the program could help a youth become a professional firefighter, should they choose so. Bruyere predicted an initial time commitment of three to five hours a week, although that would increase once training begins, and the program could help them become a professional fire fighter later on in life, saying, “it’s a starting step, and then they could move on and on”.

The youth would be with an assigned senior firefighter at all times while out in the field, but there will be restrictions on what they can do. In addition to staying outside while fighting a structure fire, a junior firefighter will not be permitted to operate vehicles, stray from the sight of their assigned superior, leave the vehicle during an emergency with downed power lines or a gas leak until the area is cleared or have contact with an injured person or dead body.

Although some members of council pondered whether to try the program on a trail basis first, M.D. CAO Derrick Krizsan pointe out that the three youth interested in the program are children of current firefighters, saying, “these are people who know what happens in the hall, and they are quite comfortable having their children in there”. Even if the program went out into the schools, there is still an extensive application process for the youth to get through before they are allowed to gear up, which includes the fire chiefs having a discussion with their parents.

“There’s going to be real expectations with grade point average, attendance at school, all of these benchmarks that are going to have to be met,” said Krizsan. “This isn’t a give-away, a freebie, this is going to take some real commitment.

“I have enough confidence in these guys that if there’s a problem, they’ll either adjust mid-cause or we’ll review it.”

Council passed a motion to accept the use of the program with an annual review. The full policy for junior firefighters is outlined under the Vauxhall Regional and M.D. Taber Regional Fire Department operation guidelines, subject: Junior Firefighters.