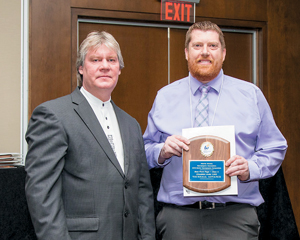 The Taber Times and Vauxhall Advance, along with their sister publications, made their presence felt at the annual Alberta Weekly Newspaper Association (AWNA) Awards earlier this month in Calgary.

The Vauxhall Advance earned Best Front Page and Best Overall score for Class A, circulation under 1,100.

Judges for the comeptition were from British Columbia, Saskatchewan and Nova Scotia publications.

“These competitions, you are not simply choosing your best issue of the year and calling it a day. You submit the issues the judges choose. It stresses the drive to produce a quality product week in and week out for consistency with all the staff that makes up the Vauxhall Advance,” said Val Wiebe, publisher of the Vauxhall Advance and The Taber Times.

Aided by top spot in both Best Front Page and Best Sports Page to go with second in Best Editorial Page, The Taber Times earned the best overall score (896 out of 1000) in Class B newspapers for the 2016 Better Newspaper Competition in General Excellence.

“The award is the very definition of a team effort in the whole Taber Times office, with excellent staff with how well you see us score across various criteria. That also includes the residents of the Town of Taber and Municipal District of Taber as well, in being engaged readers and participants in all the news and sports tips we’ve received over the years to follow up on,” said Wiebe.

“The depth of our news, sports and feature stories are aided by a readership that cares very much about their community. This award goes far past the walls of the Taber Times where every resident should be proud, including our advertisers, who support local, who believe in this newspaper as much as we do which is recognized both provincially and nationally.”

“No newspaper is perfect, we all have our flaws and mistakes, but I’ve long said I’d put up our weekly newspaper to any other in the province in the depths it covers its community the way that we do. With how competitive our circulation category was, the paper that finished in third place would have finished first overall as well across all circulation categories with its overall point score,” said Greg Price, editor of the Vauxhall Advance and Taber Times.

“The judging process is subjective with different judges from across British Columbia, Saskatchewan and Nova Scotia, but nevertheless, we strive to deliver a quality product week in and week out with hours spent both on and off the clock.”

Being able to see the process first hand this year in Calgary, Price got a glimpse into the state of the weekly newspaper industry in the province.

“There are so many great newspapers out there the whole length of the province with sharp presentation, eye-catching photographs and ads and in-depth reporting and features,” said Price. “Community newspapers across the province are doing an excellent job as a vital service in covering their community on the issues of the day both big and small in smaller centres that you won’t find on the Internet. It makes for a better informed community as a whole that we should all be striving for in caring about our communities”.

Westwind Weekly also placed in the photography awards with Tijana Martin getting second place for her human interest photo of ‘Legion Honours Fallen Members’, along with another second place finish for feature for her photograph of ‘Symposium Preserves Blackfoot Language, Culture’.

“It was absolutely breath taking some of the photographs I viewed with unique angles and different perspectives that evoked emotion. You easily could have seen some of these pictures from weekly newspaper reporters find their way into Sports Illustrated or Time Magazine.”