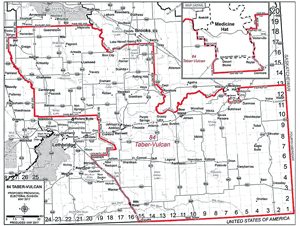 Population is the M.D. of Taber’s biggest concern when it comes to the redrawn riding boundary lines.

The report noted that although the province’s population has grown, the increase has favoured some parts of the province rather then others. As such, they recommend that four ridings in the northeast of the province be consolidated into three, combine five electoral divisions into four in the central west area of the province, combine seven southeast ridings into six and add three ridings to the Calgary, Edmonton and Airdrie/Cochrane areas.

In the southeast of the province, the reconfigured ridings would consist of Battle River-Wainwright, Drumheller-Stettler, Strathmore-Brooks, Little Bow, Cardston-Taber-Warner, Cypress-Medicine Hat and Vermilion-Lloydminster.

The M.D. of Taber currently falls into two ridings: Little Bow and Cardston-Taber-Warner. Under the proposed changes, the M.D. would fall under the proposed Taber-Vulcan riding, which would reconfigure the present Little Bow riding to absorb the remaining area south of the former Cypress-Medicine Hat riding, extending from the Saskatchewan boundary west, along the U.S. border. The western boundary would be formed by Highway 4.

This would add the area east of Highway 4, including Taber, Coutts, Milk River, Warner, the County of Vulcan and Vauxhall to the riding. It would include parts of the counties of Warner and Lethbridge, to just north of Picture Butte. The resulting population would be 41,683, or 11 per cent below the provincial average.

“Certainly, this is a concern for the municipality. It puts us into an entirely different constituency than we have been. A larger constituency, from the corner of Saskatchewan and Montana all the way up to almost Blackie,” said Brewin. “I’ve got huge concerns on it, personally.”

Coun. Bob Wallace, whose division lies within the Little Bow riding, said that the change made sense to him, and was just relieved that they weren’t absorbed into a Calgary riding.

“Our concern in Little Bow at the time was they were going to take us up into a sliver into Calgary, and half the population was going to be City of Calgary (residents),” said Wallace. “With that thought in mind, everyone in this area is like minded to us. We get along, it’s agriculture.”

Wallace, “trying to look for some positives” in the situation, pointed out that all the communities within the proposed Taber-Vulcan area were heavily into agriculture. Additionally, the M.D. was “dead centre” of the new riding, which could prove advantageous to them, and a large chunk of the population would reside in the M.D., but did agree with Brewin’s point of the sheer size of the proposed riding.

“It is just a large area — that’s my biggest concern. I don’t know how many villages and towns will be in there,” said Brewin. “Certainly, there will be half a dozen irrigation districts, probably two or three school divisions.”

Wallace acknowledged that M.D. residents in the Little Bow riding would probably have a different view of it compared to their Cardston-Taber-Warner counterparts, as the change has dropped a lot of them in with people with similar interests, namely agriculture.

“The only thing is when does somebody pull the trigger and say population doesn’t trump everything?” said Dwight Tolton, M.D. councillor, whose division also resides within the Little Bow riding. “What I understand, quite a few ridings in Calgary are 20 minutes across by car. I think sometimes, there should be some kind of a variable weight that they weigh, population versus five hour, four hours to drive across.”

The Little Bow riding would also lose higher population areas, such as Coaldale and Picture Butte, Tolton pointed out.

Other councillors echoed similar sentiments about the size of the riding.

“We’re losing, across the province, more rural seats,” said Merrill Harris, M.D. councillor. “It’s just a concern, the agriculture base of this province, the voice that they have is being (lessened).”

Council passed a motion for administration to draft a letter stressing council’s concern over the size of the proposed riding and the number of municipalities within it, and to register them to attend a July 21 public house in Brooks to provide feedback on the boundary changes.