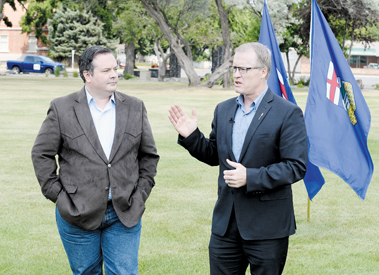 A week-and-a-half into the infancy of the new United Conservative Party (UCP) and its leadership race is already heating up.

Last Wednesday, on the grounds of Confederation Park in Taber, Cardston-Taber-Warner MLA Grant Hunter officially endorsed Jason Kenney for the leadership of the party.

The United Conservative Party leadership election is to be held on October 28, 2017.

“The reason why I picked Jason as the person I’m going to endorse is first of all, in 2019 we are going to be in serious trouble in Alberta. We are probably going to have over $90 billion dollars in debt, the economy is going to be sluggish and it’s going to be hard on families. We need a leader that is going to be able to hit the ground running,” said Hunter.

Hunter added he did his due diligence in grilling Kenney on what it means to be conservative and why conservatism has its value for prosperity and liberty.

“Jason has the ability to articulate that like nobody else I’ve ever met,” said Hunter. “Conservatives are passionate and principled people. And this is one of the reasons why conservatives sometimes split apart. We had a family split before which in my opinion was a big result why the NDP won this last election. We need to have a leader that can keep the team together.”

“That leader has to be able to say to everyone around the table ‘You have a voice’. You have the opportunity to speak, not everyone is going to get their own way, but you have the ability to say what you feel your constituents need.”

Both the Wildrose and Progressive Conservative parties card-carrying members in the province voted 95 per cent in favour of joining forces to form the United Conservative Party on July 22.

“Now that that has happened, the train is out of the station and we now have hope coming for Albertans and I believe the new face of that hope is this guy right here in Jason Kenney.”

With the train out of the United Conservative station, indeed the loudest whistle stop was in the Cardston-Taber-Warner riding.
Starting his leadership tour in Cardston before making his way to Taber, the message was indeed definitive in the riding.

“In many ways, this is where the whole unity train left the station,” said Kenney. “A lot of PCs and Wildrosers well over a year ago got together and said it’s time to bury the hatchet. It’s time to focus on what unites, not what divides us. It’s time to put Alberta first. We saw the unity movement take traction in this area faster than anywhere else in Alberta. You want to take Alberta back from this accidental socialist government.”

Kenney highlighted the riding being the leader of the unity movement in both the PC and Wildrose referendums in Cardston-Taber-Warner on July 22.

It was the only riding out of the 87 constituencies in the province in which 100 per cent of the voters voted yes to unity, according to Kenney.

“It was legitimate, it was democratic, it was unanimous,” said Kenney.

Kenney questioned the crowd of who they think is best prepared not only to defeat the NDP, but to lead a province in a time of trouble.

“As Grant said, a massive deficit and fiscal disaster that we will be inheriting. It is a province that is still suffering from one of the longest and deepest recessions in our history. Tens of billions of capital that has fled. We need a premier that has the relevant experience and temperament to step into that job on day one and begin making tough decisions,” said Kenney. “To lead this province back to prosperity, to renew the Alberta Advantage and restore investor confidence. To begin balancing our budget, reducing our taxes and, yes, scrapping the carbon tax and modernizing our public services. This is all going to take strong and experienced leadership.”

Kenney served in Parliament alongside then Prime Minister Stephen Harper for 10 years as a senior minister in such portfolios as Multiculturalism and Citizenship, Employment and Social Development and National Defence.

“I offer that experience as well as when I was president of the Canadian Taxpayers Federation in fighting for fiscal responsibility,” said Kenney. “I think what we need is experienced leadership that is right for the huge challenges to get our province back on track.”

“Let me be blunt. I think one of the reasons our conservative coalition fractured, one of the reasons we’ve gone through a decade of division is because in recent years, we had a style of top-down and at times arrogant leadership that told people what to think rather than listening to them,” said Kenney. “Let’s learn from the mistakes of the past and not repeat them. That’s why I signed my Grassroots Policy Guarantee. I’m not going to go out there and tell you all what the policies of our united party will be. Let’s take advantage of this fresh start, a new beginning and empower the grassroots members to determine our basic policy direction. I have the confidence to invite our grassroots members in our united party to set basic policy direction rather than telling people what to think. How about a period of humility where we listen to the people instead? It’s time for a collaborative, team-building style of leadership.”

Kenney’s Policy Grassroots Guarantee released earlier this month included: 1. Organize regional policy workshops, inviting all members to participate in open, informed debate to generate ideas for local policy resolutions. 2. Encourage constituency associations to hold local policy meetings, where grassroots resolutions can be proposed and voted on. 3. Allow all members to comment on and rank preferred resolutions, using a secure online platform. 4. Debate, amendment and adoption of resolutions at the founding UCP Convention to form a Policy Declaration. 5. Appoint a Platform Committee made up of UCP members and MLAs to consult Albertans of all backgrounds and refine the Founding Principles and Policy Declaration into an election platform.

“I say, let’s not rush, let’s not improvise. Let’s take our time and do it the right way. Let’s do it the same way we created this party (UCP), democratically.”

A small crowd gathered for the announcement including Taber Mayor Andrew Prokop and councillors Jack Brewin and Laura Ross-Giroux, along with former MLA Bob Bogle.

A handful of questions were taken from the gallery including the sore spot of equalization payments from Alberta to eastern Canada.

“Some Albertans think we can just turn off the tap and unfortunately we can’t. The equalization money that goes from Alberta to primarily Quebec, that’s about a $10 billion annual transfer through Ottawa, that comes out of the federal taxes that we pay. We don’t touch it, Alberta can’t stop it. It goes to Justin Trudeau and the formula decides how it is dispersed,” said Kenney. “What we have to do is put up a heck of a fight to insist on a different formula. Right now, we are in a recession and we are transferring money effectively to Quebec which is in a period of growth. We have eight per cent unemployment and they have six per cent and they are getting $10 billion a year from Alberta.”

“We need strong Alberta representation in Washington. Donald Trump is a tough guy and he doesn’t respect weakness. We should come up with a list of responses like reciprocal tariffs if they were to impose an import tax on Canadian imports,” said Kenney. “We need to find points of leverage. Canada is the major trading partner of 38 of the 50 U.S. states. Alberta is the major trading partner of about 12 of the 50 U.S. states. We need to find in those exports and U.S. imports into Alberta leverage to make him reconsider an attack on NAFTA, which has worked well for us.”