Posted on September 7, 2017 by Vauxhall Advance 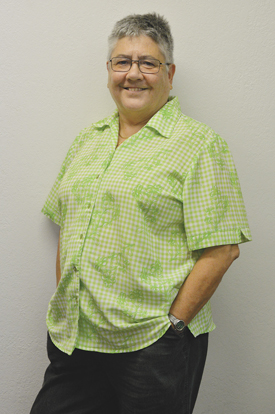 Taberite Pat Bremner will be seeking re-election as the incumbent for the Ward 5 position on the Holy Spirit Catholic School Division’s board of trustees in the upcoming municipal election on Oct. 16.

Elected to her first term as trustee in 2013, Bremner is currently serving as vice chair of the board of trustees. Ward 5 includes St. Mary’s and St. Patrick’s schools in Taber, as well as the recent addition of St. Michael’s School in Bow Island.

“I want to be part of ensuring local school boards — whether Catholic or non-Catholic — remain autonomous, so that the government doesn’t centralize,” said Bremner.

“I feel there’s a movement that the government wants to centralize many things, and I think that would be a mistake. And I also think that the movement to do away with publicly-funded Catholic education is a disservice to have only one school system. So there’s two issues — to maintain that parents have choice, and to retain the autonomy of the local school board — because I think that the board members have the ear of the constituents, and if it was to be centralized, Edmonton would not be able to provide that same service.”

Bremner believes bringing a business background to the work of the board can often inject a unique perspective on educational issues.

“I came out of a 35 year career with Safeway Supply. I started at entry level, and rose to plant superintendent. I worked in the Calgary bread facility for 28 years, and then came down as supervisor at Lucerne in Taber, and I retired in 2010. So although I didn’t come out of education as many of the trustees do, I was sort of on the flip side — I was hiring the ‘product’, so to speak. I believe that business people provide an interesting insight into the board — sort of an ‘odd man out’ — than people who come in out of education, (and) can help avoid ‘groupthink’.”

Worried that support for Catholic education is under attack at the policy level in the province, Bremner plans to vigorously defend the right of parents to choose their children’s educational destiny.

“I think publicly-funded Catholic education is under siege, and that concerns me, because I think that parents should have the choice of the way their children will be educated, and Catholic schools are constitutionally protected. I also think that the current government — while they have done wonders in funding — have tried to remove the parent’s influence in curriculum. And as Catholics, we believe that parents are the first educators.”

A key issue considering the demographic environment in the division, Bremner will also be focused on improving the educational achievements of First Nations-Metis-Inuit (FNMI) students.

“I would certainly like to see the gap between First Nations-Metis-Inuit achievements narrowed. Holy Spirit works very closely with both the Blood and the Piikani reserves, and we have quite a large number of students that are of First Nations descent, and I am of indigenous descent as well, so that’s a big thing for me. I would like to see the bar raised for all students, but particularly First Nations-Metis-Inuit, that just getting a high school education shouldn’t just be enough. They should achieve to the best of their ability. And that applies to all students, of course.”

During her present term, St. Michael’s School in Bow Island was added to Ward 5 from another Catholic division.

“St. Michael’s came under our umbrella,” said Bremner. “I now represent that, which is part of Ward 5. Bow Island has been a treasure for us, they’ve greatly appreciated everything we’ve done, and they’re a great school. It’s a nice school — it’s on our wish list for modernization, but that’s a wish list, and we understand the economy — but the school itself, because there’s so many families who attend there, the older help the younger.”

Learning should never be something people ever stop doing, no matter what their age, argues Bremner.

“Never stop learning. And that’s all kinds of learning. I believe in physical education, I believe in mental, emotional and spiritual education. And I believe the Catholic attitude toward education is holistic. So we take the entire package, and we don’t leave out the spirit — we leave that intact, and allow children and staff both to grow in all ways.”

Having served as vice chair of the board of trustees, Bremner doesn’t rule out potentially seeking the top elected role of chair in a subsequent term.

“This will be my second election. It’s a four-year term, and if I succeed, it will probably be my last term. I’ve been very grateful for my two years as vice chair, because it’s given me a chance to get to know people,” said Bremner.

“ I try to be as active as I can. So I am thinking, in another year, perhaps I would put my name in for chair if my fellow board members felt I was up to it. It usually changes every couple of years, and we try for rural-urban. That’s one of the things that I also want — although Holy Spirit is an incredible division because it is what we can ‘rurban’, a combination of rural and urban, and our schools in rural areas are different than in the rest of the province, because they’re maintaining our enrollment. Some of that is just plain old demographics, but some of it has to do with the excellence in education, and the assurance that rural school’s needs are met, and we don’t just focus on urban, because there can be different issues.”

Accepting of a challenge, Bremner actually hopes to face an opponent in the upcoming election rather than returning to the board through acclamation, as occurred in 2013.

“Last time there was nobody that ran against me, and I felt a little bit cheated, because I wanted to win the election. I wanted to go in knowing that I was chosen.”