Several locals answer the call to save Waterton

Posted on September 21, 2017 by Vauxhall Advance 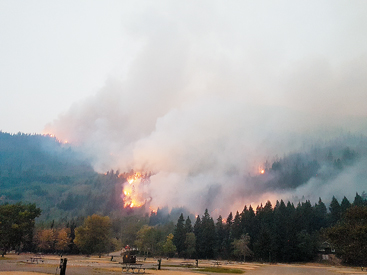 It was brothers and sisters in arms from the area that helped save national tourism treasure Waterton Lakes National Park from being destroyed by fire.

Both the Town of Taber Fire Department and M.D. of Taber Regional Fire Department deployed 16 firefighters and resources to the mass fire threatening the area that as of Friday afternoon was still hectares in size.

Last Sunday night (Sept. 10), the M.D. of Taber received notification from the provincial operations centre that further assistance was required from multiple fire departments who pooled all their resources. M.D. council authorized to mobilize shortly after.

“We realized what resources we could allocate to this fire and personnel and made contact with the select people so they could make contact with their employers to take the time off. We did the very best to include all five fire stations we have in the M.D. (M.D. of Taber, Vauxhall, Enchant, Hays, Grassy Lake),” said Kirk Hughes, deputy fire chief for the M.D. of Taber Regional Fire Department.

Ten members of the regional department were deployed with support staff back home dealing with logistical issues, administration and keeping social media up to date.

As M.D. crews made their way to Waterton, the skies were already ominous. Sunday night it was already smokey coming into Cardston with a red sun in the sky and brown haze.

Volunteers got the lay of the land when they reached Waterton, scouting the area and seeing potential structures that needed to be protected.

Parks Canada had its own Instant Command System in place where M.D. crews met the divisional leader at the time in which they were given their duties.

“We checked into our hotel rooms, got some food and checked all our equipment and got ourselves ready to go if the fire came that night. It didn’t, but with the way the winds and the weather was going, no one was sure how the fire was going to behave,” said Hughes.

Monday morning, crews were debriefed and Nathan Cote, deputy fire chief of the Taber Fire Department was given command of the townsite division. Hughes was the task force south commander with the north taskforce commander being assigned to Peter Kidd from Lethbridge.

“Between the two taskforce commanders and the division, we were responsible for the entire town,” said Hughes.

M.D. crews aided from Cameron Falls Road down to the creek which included Cameron Falls itself, the RCMP detachment and water pump house and various cottages and kiosks.

“The pump house was especially important because without that, there’s no water throughout the town,” said Hughes. “That was one building that just had to be protected.”

The M.D. brought a wildland unit and Engine 43, working alongside Stirling and Raymond fire departments, and using a water tank from Willow Creek. The M.D. regional department also brought a command truck and an instant command post which is a big trailer that carries extra tanks, fuel, food, water, hoses and road blocks.

“As the night went on, the smoke got darker and darker and darker. You could see water bombers come through throughout the day. Some of the fire behaviour analysts from Parks Canada indicated there was something that changed, finding out where the fire went. We would find out later that the rapidness of the fire growth gave a little bit of a false sense of security in knowing where it actually was,” said Hughes.

During the timeframe, mobile water tanks and pumps were set up.

items like propane tanks were moved away from buildings and the fire line. Fire crews identified buildings most susceptible to fire like the cedar-shingled roofs to coat with foam.

Key safe areas were identified if crews could advance or had to pull back.

“Around 8 p.m.  (Sept. 11) we had a meeting and Parks Canada wasn’t sure where the fire was. They had thought it hadn’t rounded the Cameron Valley at that point, but they would get back to us fairly soon. They thought it was coming later this evening. Then not even three minutes later they came back and said the fire crested the ridge of the town and we can see it. We could see the red flames coming over top,” said Hughes.

“From the community centre right downtown of Waterton, you could look up and see it coming form the west side of the area, pushing its way to town.”

Town of Taber crew was on the north end of Waterton with M.D. crews on the  south end, who started hosing down cedar-planked houses. Sprinkler systems were operational and houses were foamed where crews could.

“Our notifications were around 9 p.m. and by about 10:15 p.m. we were in the fight for sure. It was very fast and very quick. We would end up fighting the fire until about 10 in the morning where we still had crews on the ground, fighting the fire and looking for exposures,” said Hughes. “At one point, from about Evergreen Avenue on the south end near the campgrounds to pretty much past the Prince of Wales building, it was a whole wall of fire coming to the town. It was pretty ominous. We were fortunate in that the fire was pretty stagnant in how it advanced, it sort of zig zagged a little bit because of the wind. You listened to it and it was like a jet engine coming down. All the crews did really well holding their ground, no one panicked and we took it one piece at a time.”

Crews had to pull back a bit from the Cameron Falls area because the flames were jumping so quickly to deal with the ambers that were falling with a couple of grass fires starting in the park.

“Ambers fell on various rooftops and we made sure to extinguish those. And we patrolled the area to look for any hotspot areas,” said Hughes. “Our Engine 43, the FL80, she worked pretty much non-stop on calls and backing up other trucks,” said Hughes. “Every little grass fire, every little spot fire, we knocked it down and then we watched as the hills and mountains were on fire, watching for drifting ambers as they made their way to town. It was a run-and-gun fire fight pretty much.”

Around midnight on Sept. 12, the operations centre through the fire marshall’s office started calling other municipalities to see if they could bring more resources to the firefight in Waterton. Hughes recalls the Town of Taber, M.D. of Taber, Coaldale, Lethbridge, Calgary, Willow Creek, Raymond, Stirling coming to mind for Hughes in helping fight the fire, not including various hamlets.

“It was an interprovincial effort for sure. Everyone worked together and because of ICS (Instant Command Systems) 100, everyone could work off the same page,” said Hughes. “There were three close departments who could interchange and interoperate without any flaws or difficulties.”

It is still scorched earth on the hills and mountains surrounding the Waterton townsite, but the town itself has emerged relatively unscathed from the 36,000 hectare fire which still burns. Transmission lines from the park boundary to the townsite were significantly damaged. Some other park infrastructure was lost, including the Alpine Stables just outside the Waterton townsite. The visitor centre burned down and so did the East Gate warden station, along with equipment and vehicles. Crandall Campground was significantly impacted by the fire. The Prince of Wales Hotel building was saved, though some surrounding facilities were damaged. The Red Rock and Cameron Lake day-use areas, and the Alpine Club of Canada remained intact. The Waterton Lakes Golf Course clubhouse suffered minor exterior damage.

“The jewel of southern Alberta remains intact. The hills and mountains are blacker than they used to be, but the town is still there. Eventually that stuff will grow back where you may get greening in the spring,” said Hughes. “That stuff will grow back and Waterton will be the anchor point. Given the enormous walls of fire crews were fighting, we were very fortunate that it wasn’t worse. There were 400-foot flames, some were taller than the water  tower that was next to the Prince of Wales Hotel. With how fast the fire consumed things, it still blew me away and I’m a 20-year veteran.”

Once considered ‘once-in-a-lifetime’ fires in their severity, Hughes noted these levels of fires have been ore common in recent years, having to look no further than the Slave Lake wildfire (2011) and Fort McMurray wildfire (2016).

“These fires are almost becoming routine,” said Hughes, having been posted in other areas as well including British Columbia and Northwest Territories. “This is probably my eighth one I’ve been to that can be considered once in a lifetime. These fires are relatively large and if they are in unpopulated areas no one cares as much. But we call these fires wildland urban interface as these fires are touching into towns, Fort McMurray is a good example, Slave Lake, Los Angeles is going through it right now and so is Montana and B.C. in the Kelowna area and now Waterton. These are the types of fires we call once-in-a-lifetime where you have fires that are this big threatening urban areas. These are two now we’ve seen in Alberta in a year.”

Hughes tipped his hat to all the hard work and dedication of fire crews across the province in helping save the Waterton townsite from destruction.

“It definitely prevented Waterton from ending up like a Slave Lake or a Fort McMurray. Not saying the fires were the same size, but if the fire had become rooted inside of Waterton, it would have been very hard to stop it,” said Hughes. “Not many communities can point to both their rural and town departments having such resources. It’s a big testament to the volunteer nature of both the M.D. and the town.”

Firefighting crews from across the province were quick to offer aid in Waterton while also having to balance keeping enough resources back at home incase fire broke out at the tail end of one of the hottest summer son record in southern Alberta.

“Luckily with the M.D. we weren’t spread thin. We could have sent more if they asked for more. That is the strength of our regional fire model where we have five stations (M.D., Grassy Lake, Vauxhall, Enchant, Hays,) there is 26 apparatus that we have and nearly 100 volunteer firefighters,” said Hughes. “To mobilize 10 guys and four trucks, that’s only 10 per cent of our resources. When we were away we had about five calls in the M.D. like car accidents and little grass fires and we were able to respond to those with adequate resources and manpower. It is a balancing act where you have to be careful what you give out being it has been so dry around here the last couple of months,” said Hughes.