Dry summer has made for busy fire season 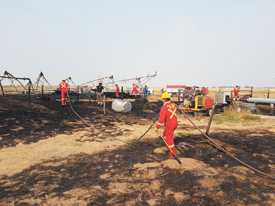 Calls have been coming fast and furious for the combined volunteer fire departments in the M.D. of Taber region.

Calls have ranged from the very minor to the extreme, including the very first call for the newlyformed M.D. department being an intermunicipal effort for the Flexible Solutions fire that required the aid of the Town of Taber, Vauxhall and Grassy Lake fire departments back in February.

A book end for massive fires was the M.D. of Taber Regional Fire Service also aiding with protecting the Waterton townsite from the Kenow Fire that raged to 38,100 hectares in size in late September.

Power poles were some of the more common calls.

“We had a lot of spot fires, grass fires started by power poles and powerlines, transformers — that type of stuff,” said Brian Schafer, fire chief for the M.D. of Taber Regional Fire Service.

“Birds land on the power line and being so dry with hot temperatures and low humidity, it doesn’t take much to start that fire.”

Schafer also saw a spike in motor vehicle collisions which he is unsure of why there has been a noticeable increase.

“I’m not sure if it’s people not paying attention, or if they are in a hurry. We’ve had more accidents this summer on clear, dry roads than we had all winter,” said Schafer.

“People speeding, being late for meetings or whatever, putting the pedal down. We had a school bus tandem accident (a month ago). Reports from one of the parents afterwards was somebody else in that same group rolled through the stop sign twice the same day as the accident, people aren’t paying attention.”

Given how hot and dry this summer was and into the first part of fall, Schafer was disappointed to see how little a lot of people heeded fire bans.

“We still responded to multiple calls where people were lighting up their burn pits, their garbage barrels. If somebody sees it and calls it in, we will respond. When we get there, if it’s a burn pit or a garbage barrel, they will be fined a set amount of money,” said Schafer. “If it’s a big fire, then they will also be fined the costs of the trucks for service which is $615 per hour per truck. It’s not cheap.”

When a partial ban was first implemented in the M.D. region in early July, it’s not like people did not know of the fire bans over the summer, according to Schafer, with the use of social media, the newspaper and the Town of Vauxhall, Village of Barnwell and M.D. of Taber websites.

“People still plead ignorance. The last one we had they said ‘we don’t know who did this’,” said Schafer, adding in the last two weeks alone leading up to his interview with The Times, fire crews attended five calls with people violating fire bans.

Ag fieldman Jason Bullock goes to council with his fire bans and gets the opinions of the various fire chiefs in what they want to do.

“It all depends on the conditions. In the spring and start of summer, it still wasn’t bad with a little bit of rain. But then it got drier and drier and drier, and we looked at imposing a higher restriction. When we had a full fire ban, all that was allowed was your propane or natural gas barbecue,” said Schafer. “All it takes is one little spark. There was a fire not too long ago between Tilley and Brooks, and the fire went five kilometres long along Highway 1. That was started simply from a truck pulling a camper that was pulling a boat, and the chains were dragging on the ground and making sparks. That was enough for those to land into the ditch. It was windy that night and it kept a continual fire as the guy drove. That’s how dry everything was. When our guys went to Waterton, we realized that could very well happen in our area having a massive fire like that, and there we had 10 per cent of our force there at the time.”

Schafer has been in Vauxhall since 1999 and on the fire department since 2000, and 2017 has been the year where fire bans were needed more than ever.

“By far this is the worst I’ve ever seen,” said Schafer.