Tolton passing the torch to Howg for Division 7 on M.D. council 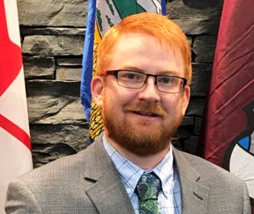 With the election races in the rearview mirror, a new councillor for the Vauxhall area is getting comfortable in M.D. council chambers.

Leavitt Howg has taken over the seat for Division 7 after previous councillor, Dwight Tolton, announced his retirement from the M.D. council.

Howg wasn’t set on running to begin with but he made up his mind after he got some support from the community.

“I was on the fence for a bit, but my neighbours figured I would be good for the council so I went with it and here I am,” said Howg.

“I always thought about it but I didn’t think I could actually do it but it always did interest me.”

Hearing support from the community as well as his friends and family played a huge role in putting his name forth.

“That helped a lot, I don’t think I would have done it by myself but everyone said I would be good. The more you think of it that way, the more you think you can do it and then a lot of support from family. They were very excited that I did get in,” said Howg.

With no one else running for the Division 7 chair, Howg was elected by acclamation.

He comes in with no previous board experience but he does bring tons of experience working on farms, which he says is huge because he can relate to most of the concerns that will be brought forward.

“I feel like I bring quite a bit, I’ve grown up on a farm my whole life. I’m a farmer by heart and by craft and by trade kind of thing. I got an education for drafting but I still go with the farmers. I understand most of their needs and I feel like I am pretty approachable when it comes to that. I will listen and I don’t have a preconceived way of how something should be, I feel like I am very fair and open to hear what people are willing to say,” said Howg.

One reason he took his time to decide was the lack of experience but he feels in the long run it won’t matter.

“That was kind of why I was on the fence but at the same time you have to learn some time. I’ve heard from other people that did go on council who had been on other boards and they thought that they would have a pretty good understanding of how everything went. But when they got in it was all new to them anyway. To me, as long as you are willing to learn, listen and stand up for what’s right then you’ll be fine.”

Howg got his first taste of an M.D. meeting on Oct. 24 which was also the first meeting for five of the seven councillors.

With more meetings on the early horizon, he knows he will be learning on the fly at a rapid speed.

Howg knows it will be a challenge to begin with but he is excited to take it on.

“There’s a lot to learn that’s for sure. I was warned before hand to try not to get overwhelmed,” said Howg.

“So I was trying to take it all in stride and slowly trying to learn. I know it’s going to take a bit but I am pretty excited for what’s in store and for helping out the area, not just my area but the rest of the M.D.”