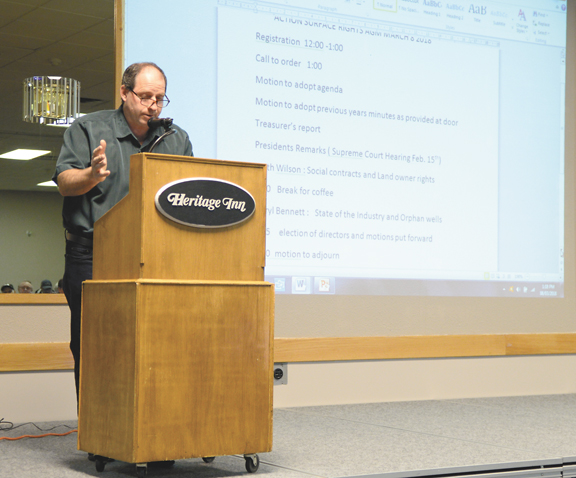 DAY IN COURT: Action Surface Rights Association chairman Ronald Huvenaars speaks to a crowd of members at the Heritage Inn in mid-March about an anticipated ruling from the Supreme Court of Canada regarding the Redwater Energy case. ADVANCE PHOTO BY TREVOR BUSCH

The Redwater Energy decision from 2016 that allows bankrupt energy companies to abandon wells without environmental liability was challenged in the nation’s highest court on Feb. 15, and the fallout from those proceedings was a topic of concern at the recent Action Surface Rights Association meeting in Taber.

As an intervener in the appeal, representatives of the ASRA are hopeful the court reverses a decision that has had serious impacts for landowners and Alberta’s oil and gas industry. The Alberta Energy Regulator (AER) which was initially granted the appeal, was joined by members of the National Farmers Union, among other organizations.

The impact of the Redwater decision should it not be reversed could see backlogs for site clean up escalating dramatically before oil and gas sites are reclaimed.

“The Redwater case came up, where ATB and its receiver were using the federal bankruptcy law to argue to give the receiver the right to sell off profitable assets, keep the proceeds, and renounce all unprofitable assets to the AER,” said ASRA chairman Ronald Huvenaars, speaking at the Heritage Inn in mid-March.

“That went to the Alberta Court of Appeal, in a vote of 2-1, they agreed with ATB. Luckily for us, there was one dissenting judge, and because of that, the Orphan Well Association and the AER was able to file an appeal to the Supreme Court, which we as an injured third party were granted leave to intervene. ATB did file an objection to us being granted status to intervene on this appeal.”

The 2016 ruling mandates that the assets of bankrupt energy companies should go to compensate creditors rather than be used for environmental clean-up costs.

The Alberta Court of Appeal ruled that federal bankruptcy laws supersede provincial environmental regulations. Since that decision, more than 1,800 wells, representing more than $100 million in liabilities have been abandoned. The responsibility of who is to pay for clean up is largely being foisted on the taxpayer.

Increasing bankruptcies throughout the oil and gas sector in the wake of Redwater Energy, which allows companies to avoid costly clean-up liabilities, prompted the AER to appeal the Alberta court decision.

“I did end up going to Ottawa just to witness the process of the appeal, and our intervening,” said Huvenaars of the Feb. 15 hearing. “We did have our lawyers, we were able to get the University of Calgary’s law clinic to represent us. I have to say, once I was there it was impressive, they were very well prepared. It’s quite a learning experience to see how things work in getting stuff to the Supreme Court. It’s pretty tightly regulated, and they were quite a bit on a timeline. The law clinic did work for us pro bono. Their costs were just administration and a few other things. We just got their final bill here this week, and it came in at $2,891. If we had to pay for everything up front, I don’t think we ever could have committed to actually (participating in the challenge). It would have been a lot of figuring to try to figure out what our costs might have been on that.”

The Redwater decision has split environmentalists and industry professionals on opposite sides of the fence since its enactment. The appeal is now under consideration by justices as industry, land-owners and environmentalists anticipate the final verdict.

“I did fly in to witness that just in person for the weekend. It was interesting,” said Huvenaars. “It was a three-hour hearing that day, and you can see how well some of the lawyers represented themselves. We were represented very well — a few of them I think kind of mailed it in, which was kind of surprising. ATB and Grant Thornton (LLP Canada), who was their receiver, had three lawyers each.”

Many argue the decision grossly conflicts with environmental rules currently in place.

This is becoming an increasing problem for farmers and landowners across the province who have had no choice but to deal with the ramifications of abandoned wells being left on their properties that can now cause potentially hazardous situations of their own.

While checks and balances are supposed to be in place, landowners cannot become secured creditors for oil and gas wells on their property.

When bankrupt energy companies refuse or can’t make lease payments to landowners, the trickle-down effect produces undue impacts on those individuals at the bottom of the financial food chain.

After two lower-court rulings have sided with the initial Redwater decision being made in 2016, the Supreme Court is now faced with the task of making a final decision on whether these bankruptcy laws are a violation of the intent of environmental rules in place within Alberta.
Representatives from insolvency professionals and banks — such as ATB — with stakes in the decision were also in attendance at the appeal, and believe that repealing the decision could lead to worse situations involving abandoned wells across Alberta.

“They (ATB) are the lender for Redwater,” said Huvenaars. “So in order to get most of their money back for Redwater, they would like to see the province pick up most of the costs. I find it ironic, and the other ironic thing is the ATB is not the only lender in this situation. A lot of banks have oil companies that are insolvent, but they’re not using federal bankruptcy law to try to walk away from some of their liabilities. But the ATB is. If this decision stands, once the ATB has this through and the decision stands, basically all the other banks won’t have any choice. Everybody has to be on the same playing field. If one lender starts doing this and has it pushed through the court, all the lenders will start doing this.”

With arguments for and against the appeal, the case as a whole has attracted the attention of thousands of people inside and out of the province, and as the tension builds the Supreme Court hopes to have a final decision on the matter by this summer.

“Generally they say a decision takes, on average, about five months,” said Huvenaars, who hails from Hays.

“I was actually surprised the hearing came through that quickly. They called it an ‘expedited hearing.’ On the upside, once the decision does come back — good or bad — I’m assuming we’ll get back in the news a little bit. I think it is good to try to keep this at the forefront as much as possible. If the decision does go against us, I believe there are some things the province can do to change the laws to make things better. It won’t be that all hope is lost. This is our first dance. The more we keep things moving forward, the better the chances are that our issues will be taken care of.”