Mr. Dick strikes up the band 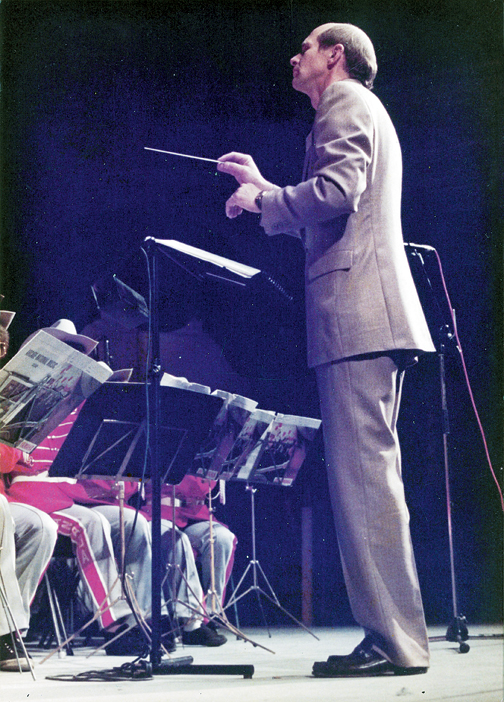 AT ATTENTION: With the mere wave of his baton, Bob Dick had a magical effect on the students that crossed his path. ADVANCE PHOTOS SUBMITTED BY CHRISTINA SCOTT

By Christina Scott
For The Vauxhall Advance

To his students, Bob Dick was many things: a musician, a teacher, a mentor, a jokester, an encourager, a supporter and a friend. As Vauxhall High School’s band director for more than four decades, the impact he made on those he taught is his greatest symphony and legacy.

Dick passed away April 4 at 73, leaving behind his two children, in-laws and several nieces and nephews. He also left the town and generations of people he helped shape to mourn and reminisce about the special influence he had on their lives. Family, friends and former students packed the Vauxhall Legion April 13 to pay tribute.

“In my opinion, Mr. Dick ran one hell of a music program,” said ’03 graduate Stacey Morcom, who played four instruments under Dick’s tutelage. “It didn’t matter how bad a student was. If you wanted to play or sing, he made sure you could do it, giving constructive criticism that was supportive and reassuring.”

According to daughter Julie Harrish, Dick had an “unparalleled” passion for music from an early age, eventually becoming part of several groups where he played tuba and bass violin. In 1965, Dick began his teaching career at W.R. Myers in Taber. While there, he became actively involved in the Taber German Band, befriending school band director Milt Iverson. Iverson took Dick under his wing, mentoring him in all things music. In 1971, Dick became the band director at Vauxhall High School, remaining there until his retirement in 2009 after 43 years of teaching countless students.

For 40 minutes each day, students from grades 7 to 12 would gather in the school’s band room, learning to play woodwinds, brass and percussion. Over the years, the songs Dick chose were as diverse as his students, ranging from traditional marches and 60s classics by Simon and Garfunkel to music from movies such as Aladdin and Shrek. For many, band class was a refuge from the monotony of academics and everyday life.

“It was the one class I looked forward to all day,” said ’05 graduate Rachel Colligan. “No matter how bad a day I was having, I knew that going into band, picking up the trumpet and playing a few tunes with Mr. Dick would instantly put me into a good mood again.”

Year after year, Dick exercised kindness and patience as timid Grade 7 students would shakily attempt to produce something resembling music with their new instruments of choice.

“The face he made when the clarinets squawked on the high notes was priceless,” mused ’06 graduate Avery Ens. “Everybody was nervous when we had to get tuned up because people would know what we actually sounded like,” she said with a laugh.

Thankfully, the room’s white stucco soundproofing spared the rest of the school subjection to hundreds of ear-shattering squeaks and squawks. But Dick took it all in stride, teaching music one note at a time with gentle humour and guidance; wave after wave of students became adept at reading and playing music.

“You didn’t really notice he was teaching you, but he was actually instructing you from the moment you stepped in the band room to the moment you would leave,” said ’10 graduate Jared Fournier. Fournier says watching his older brother play when he was a child created in him an admiration for Dick.

“His high school band program always left me speechless [because of] the level of competency and the sheer number of students. This highlighted his philosophy that students always came first.”

Once in Grade 7 himself, Fournier became close to his teacher, sharing a similar sense of humour and a love for the tuba. As he became a mentor and friend, Fournier says Dick was always there to listen, provide encouragement and share life advice.

“He made himself available, whether needing a sounding board for a problem or simply wanting to talk. He always had a joke and an encouraging word to share.”

Dick seemed to sense when students were struggling, knowing just how to support them. Julie Leong, ’05 graduate, says she and Dick often had conversations on the difficulties of being bullied, and he built up her confidence through encouragement.

“That man cared so much about his students and would go out of his way to make sure things were OK,” said Leong.

Having taught her father, Dick worked with Leong throughout one summer to find the instrument that would best suit her before she embarked on her band career.

“He joked, ‘don’t pick up the tuba like your dad!’ and pretty soon it was settled that I was a pretty good trumpet player.”

Deanne Tashiro, ’81 graduate, says Dick made sure all students felt noticed and appreciated, often making sure those who couldn’t afford instruments had them.

“He was aware of everyone and made sure no one was forgotten. I was shy and quiet, but Mr. Dick would still let me know he knew I was there,” she recalled. “He used to come up to me and press a finger on my glasses leaving a blurry fingerprint. I was kind of annoyed back then but as the years went by, I came to remember that fondly.”

Dick took great pride in his students, always looking for avenues to showcase their talents. Throughout the years, the Vauxhall High School Viking Band played at home, across Canada and on the international stage. One of Dick’s proudest accomplishments occurred in 1985 when the band played at an International Music Festival in England.

“It served as a wonderful lifelong memory for him and his students,” said daughter Julie. “He took his students on numerous band trips, putting up with all of their shenanigans.”

Dick was also the organizer of several school talent shows, allowing anyone with creative ability to shine. Though some students weren’t enrolled in band, he always encouraged them to make the most of their talents. Cilena Chubb, ’06 graduate, remembers how Dick nurtured her singing ability.

“He made it a point to get to know me and ‘voluntell’ me that I was singing in school functions,” she recalled. “He encouraged me to come in and practise anytime I wanted. He would just listen and support. He enrolled me in choral music every year and he was the only teacher to hand write me a card when we graduated.”

Chubb says when she agreed to sing at the school’s fundraiser years after graduation, Dick couldn’t hide his enthusiasm.

“As soon as he saw me he made sure the sound system was ready to go and I had everything I needed. He even hung out with me backstage for a bit to calm my nerves and catch up. He did a lot of small things that went unrecognized. I hope he knows they were appreciated.”
“Mr. Dick’s impact on me was incredible as a student and a young musician,” added ’03 graduate Alana Folkard. “He was one of my biggest encouragers and supporters in that and he just made such a huge contribution to my passion for music. For that, I’ll always be grateful.”

Aside from music, Dick was famous for his jokes and pranks, receiving them as well as he dished them out. He was not above participating in arm-wrestling challenges with students, even though most will admit they “lost miserably” and “never had a chance.”

Dick was also a dedicated husband and father; he and his wife Marge devoted their lives to their children, spending countless hours supporting them in sports and music endeavours.

At his final band concert before retirement in 2009, Dick gave his baton a rest, dusted off his tuba and joined the band he spent 40 years building for a rendition of “Them Basses.”
“I am ashamed to admit that he played that song with such fluency and ability that it made me look like I was back in Grade 7,” said Fournier.

In the years that followed, Dick spoke of his time at Vauxhall High School with the same pride his former students now use to speak of their time with him. Although the school now offers a rock band program instead of a traditional one, most who had the pleasure of being taught by Dick share this sentiment expressed by Morcom:
“Mr. Dick and the music program made my high school years. Playing in that huge, white, foamy-walled room are some of my fondest memories.”