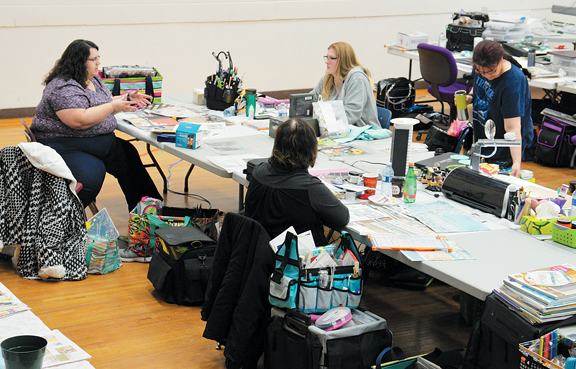 CROPPING IT UP: Scrapbooks were out in full force for the Friends of the Vauxhall Public Library fundraiser held inside the Vauxhall Community Hall in April. Some $5,000 was raised, with a matching grant by the Bank of Nova Scotia. PHOTO BY TREVOR BUSCH

The Friends of the Vauxhall Public Library are certainly allies of the facility as they have raised a good chunk of money from one of their events.

For the groups annual spring scrapbooking event, the Friends of the Vauxhall Public Library held a successful weekend as groups of ladies travelled from across southern Alberta to attend.

The event lasts for an entire weekend and was held this year in April, to big success.

“It’s our annual spring scrapbooking, which we do every year and it’s a fundraiser for the library. We get ladies from all over, ladies came down from Calgary and I guess you could say southern Alberta. They come and they scrapbook and connect with other ladies, it’s a fun weekend. It’s Friday to Sunday and they stay over. We do bucket raffles, a 50/50 draw and then the (Vauxhall) Scotiabank matched the funds that we made for our weekend. We made $5,047 and they matched the $5,000,” said Edi Winberg, board chair of the Friends of the Vauxhall Public Library and chair of the Library Board.

While no hard goal was set, the group was ecstatic with the final result of just over $5,000.

With only three days to raise funds, they were pleasantly surprised with how much support they received.

“We made our goal, it’s a short timeline to make too much money,” added Winberg.

As spring weather was delayed in southern Alberta, there was some troubleshooting needed to hammer out a date that worked best.

While they eventually decided on an April date, it was still earlier than they had originally anticipated.

Due to the eccentric weather and earlier date, they didn’t get the attendance they usually see, though the financial results were still very good.

“There were approximately 40 ladies,” said Winberg. “It was less, we usually have more, but due to weather and we actually had to change the weekend so it was a week earlier. We didn’t get as many but it was a good turnout. We were able to reach our goal of $5,000 so that was good.”

With the $5,000 raised and $5,000 matched by the Vauxhall Scotiabank, all of the money will be directed back into the public library.

With the spring scrapbooking event the first of the events the Friends of the Vauxhall Public Library plan, they aren’t entirely sure if there will be another event in the fall or not.

While they would like to host another, the lack of volunteers is a real struggle that they are trying to overcome.

While the fall event is in jeopardy, next year’s scrapbooking is still in the cards.

“We for sure have it planned for next spring. We usually have one in the fall but it’s just getting hard because we don’t have the volunteer base that we’ve had. We need volunteers, people who are willing to come and help put the weekend on, it’s a lot of man hours. We will for sure have the one in the spring next year,” continued Winberg.

Come this summer though, they will be hosting a casino.

Once again volunteers will be needed to successfully run the event and they
hope they can get a few more extra hands.

If you are interested in volunteering for any of the upcoming events you can contact Edi Winberg by phone at 403-654-2895 or by email at edi.winberg@gmail.com.