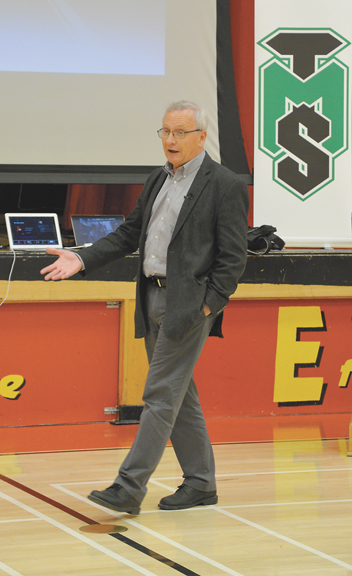 Radical reformers who refused to accept the doctrine of infant baptism enforced by the Catholic Church, early Mennonites were heavily persecuted for their beliefs which would later create ripe conditions for a global diaspora.

Speaking at W.R. Myers High School at the request of Taber Mennonite School, Hans Werner of the D.F. Plett Historical Research Foundation delivered a presentation on Mennonite origins to students, staff and parents.

Mennonites are members of Christian groups belonging to the church communities of Anabaptist denominations named after Menno Simons (1496–1561) of Friesland, today a province of the Netherlands. Through his writings, Simons articulated and formalized the teachings of earlier Swiss founders. The early teachings of the Mennonites were founded on the belief in both the mission and ministry of Jesus, which the original Anabaptist followers held to with great conviction despite persecution by the various Roman Catholic and Protestant states.

The early history of the Mennonites starts with the Anabaptists in the German and Dutch-speaking parts of central Europe. Setting the stage with a description of the origins of the Protestant Reformation touched off by Martin Luther in the early 14th century, Werner pointed out that not everyone at the time believed reformers like Luther had done enough, eventually sowing the seeds of the later Mennonite movement.

“There were those who said that Luther had not gone far enough. One of them was Huldrych Zwingli, who was a Swiss reformer. He debated with some young men in Zurich, Switzerland, and the young men began to think that Huldrych Zwingli had not gone far enough. They began to question things like should a child be baptized? Should the church not be made up of people who could reasonably make up their own minds about this, and that they should be baptized adults? Huldrych Zwingli never went that far, but some of his young followers did. They began to ask these questions.”

Some of the followers of Zwingli’s Reformed church thought that requiring church membership beginning at birth was inconsistent with New Testament example, believing that the church should be completely removed from government and that individuals should join only when willing to publicly acknowledge belief in Jesus and the desire to live in accordance with his teachings.

The most distinguishing feature was a rejection of infant baptism, an act that had both religious and political meaning since almost every infant born in western Europe was baptized into the Roman Catholic Church.

“This was a very radical idea, and hence the Reformation led by these young men — mostly men — was called the Radical Reformation,” said Werner. “This was very difficult, because in the 1500s who are you, and who would you be, if you’re not Catholic? Because the church, and the citizenry, were very much part and parcel the very same people. So if you’re not baptized at birth, who are you? People wouldn’t think about that as an option, that you could actually have a life and be a part of a society and not be baptized. That was not conceivable. One of the other things these young radical reformers began to ask is, is it right for the Christian to kill?”

Many government and religious leaders, both Protestant and Roman Catholic, considered membership in the church to be dangerous — the concern of some deepened by reports of the Münster Rebellion, led by a violent sect of Anabaptists. They joined forces to fight the movement, using methods such as banishment, torture, burning, drowning or beheading.
“So what happened? Well, it didn’t go well. It didn’t go well at all,” said Werner. “The Catholic Church — even the Lutheran, and the Reform, which was Zwingli’s church — they called these people ‘swarmers’, they’re crazy people. So persecution set in fairly heavily, this was not acceptable. And in a forest in Schleitheim, Switzerland (Feb. 24, 1527) this group of people who believed this way got together — under persecution — and wrote down what now they believed.”

This resulted in what is known as the Schleitheim Confession, one of the earliest expressions of Mennonite faith. Its seven articles covered:
• The Ban (excommunication)
• Breaking of bread (Communion)
• Separation from and shunning of the abomination (the Roman Catholic Church and other “worldly” groups and practices)
• Believer’s baptism
• Pastors in the church
• Renunciation of the sword (Christian pacifism)
• Renunciation of the oath (swearing as proof of truth)

Despite strong repressive efforts of state churches, the movement spread slowly around western Europe, primarily along the Rhine.

Officials killed many of the earliest Anabaptist leaders in an attempt to purge Europe of the new sect. By 1530, most of the founding leaders had been killed for refusing to renounce their beliefs.

Menno Simons, a Catholic priest in the Low Countries, heard of the movement and started to rethink his Catholic faith.

He questioned the doctrine of transubstantiation but was reluctant to leave the Roman Catholic Church.

However in 1536, at the age of 40, Simons left to become a leader within the Anabaptist movement, and was wanted by authorities for the rest of his life.

His name eventually became associated with scattered groups of nonviolent Anabaptists whom he helped to organize and consolidate.

Facing varying degrees of prejudice and persecution for their beliefs in ensuing decades, Mennonites would eventually immigrate to found many colonies in Eastern Europe and eventually overseas by the 19th and 20th centuries.

Mennonites have become known as one of the historic peace churches because of their commitment to pacifism.

There are about 2.1 million Anabaptists worldwide as of 2015 and they can be found in communities in at least 87 countries on six continents.

The largest populations of Mennonites are to be found in Canada, the Democratic Republic of the Congo, Ethiopia, India and the United States.