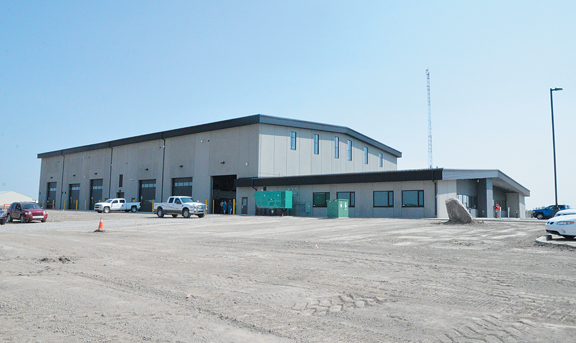 The finishing touches are still to be made for the M.D. of Taber’s new operations and maintenance building.

But nevertheless, spectators got a sneak peek into the impressive building, with 300 attendees at an open house last week. Planning for the facility was initiated back in 2013, with a condition and functionality assessment of existing buildings in 2014.

“There were four main buildings that were being utilized. The oldest was constructed when Louis St. Laurent was prime minister in 1954. There was another facility constructed in the 1970s and then a few in the early 80s and then early 2000s there was the chem shed and the welding bay,” said Derrick Krizsan, CAO for the Municipal District of Taber. “The rationale was that the 10-acre site inside the Town of Taber, given the increasing size of our equipment, with the analysis of our previous buildings with things like turning radius etc., the current buildings were just not adequate for current use.”

Need assessments were done in 2015 and a building design committee and an engineer was selected.

“We identified some deficiencies in our current buildings. For instance, for equipment with its sheer size,” said Krizsan, adding plenty of attendees at the open house got to see how a 627 scraper (heavy equipment used for earthmoving) was housed.

“When that pulls into a shop that was built for equipment that was much smaller than that in the 1950s, you can see how inefficient it is with functionality. We’ve gone from six-axle gravel trucks pulling single-axle trailers to now, tandem-axle trucks pulling triple-axle trailers, carrying many multiple times more gravel than they used to. Graders have gotten larger, earth-moving equipment has gotten larger. The scope of what we do and the capabilities the municipality has have grown significantly over the decades.”

Gravel crushing is done internally, where Krizsan noted the savings are significant. Gravel is being crushed at less than $3 per yard. Bringing in a custom crusher, it would cost significantly more according to Krizsan.

“The same with our construction crews, our project crew which does all our culvert installations and drainage projects, our road maintenance… it is much more efficient for us to do that given the size of our municipality and our budgets,” said Krizsan. “We have gone from one high hoe and now we have four. We have four scrapers, 14 road graders, we have nearly 300 pieces of equipment that are maintained.”

“We started looking at our long-term needs and is the current site suitable?”

In 2016, finalized lot development and building design was accepted (on a 40-acre lot site) by council, where construction began in January 2017.

The operations and maintenance building which is located along Highway 3, between Taber and Barnwell, is 33,536 square-feet in size on a 17-acre compound, with a shop size of 2,319 square feet.

The building will house staff responsible for the maintenance of municipal equipment as well as administrative offices and meeting rooms for public works, and agricultural service board departments of the municipality.

Approximately 45 public works and agricultural service board staff members will report to the facility daily, with all but seven of them leaving to perform road construction and road maintenance, as well as other duties throughout the municipality.

“That’s not a 100-year building, it’s a 200-year building with the nature of the construction,” said Krizsan. “Getting all those different functions together under one roof is invaluable.”

“The offices are for people who currently are in positions that require them to do paperwork, permits, reviewing the design of projects, are supervisory and director-level stuff are not tied to the desk. They are working supervisors in the field, which many of them, for the first time, have a work station where their former work station was in the seat of their truck and the coffee room table in the lunch room at the old shop. It will be a productive change.”

Having public works and the ag service board under one roof for the first time, accounts for two-thirds of the M.D.’s municipal budget according to Krizsan ($10 of $15 million annual budget).

“The building is replacing five older buildings,” said Jack Dunsmore, retiring director of planning and infrastructure for the M.D. of Taber, after 26 year of service. “Our service levels needed updating. At time our previous buildings were built, they were fine. They did their job. The public is wanting more service and better service. To do that, you have to be more efficient and that building will allow that I believe.”

M.D. council opted for concrete over steel for the building due to the incremental savings over the long-run, functionality and long-term maintenance. A steel-engineered structure was found to not have the same life span as a concrete structure, making maintenance over the long term more expensive than concrete, according to M.D. officials.

“The biggest building maintenance out there is going to be wherever there is drywall. Other than that, none of the concrete has been painted. If you paint concrete, it peels. It’s an epoxy-coated floor,” said Dunsmore. “We worked very hard in the planning portion of that building collectively as a group to make it as efficient as possible with the least amount of maintenance possible. We kept it simple. It’s not a simple building, but it’s a simply-maintained building. You wash the floors and re-paint some of the walls every so often. We did look at steel, we looked at wood and precast concrete.”

The building design committee comprised of eight different individuals according to Craig Pittman, director of planning and infrastructure for the M.D.

“We toured other facilities in southern Alberta to learn from what they had done with their successes and their failures. We ended up with the building that we have with the help of our engineers and our architects,” said Pittman. “The exterior walls are 13 inches thick, so temperature swings in that building take a long time, to heat up all that concrete or cool off all that concrete. As long as you maintain whatever temperature you want in there, it will take a long time for those switches to occur. Maintenance will be once every 25 years, the caulking will have to be redone between the panels, aside from that, it is essentially maintenance free from the structure part of it, we have huge efficiencies there.”

Pittman added the washrooms and the flooring in the shop portion all have tiling on the floors up to a certain level on the walls, which would allow simple hosing down with floor drains everywhere.

“We had some good engineers working for us along with a good architect. They recommended things to us. We didn’t accept them all, but we did within reason for cost efficiencies,” said Dunsmore.

Each of the bays in the building are drive-thru bays with doors on either end. The only bay that is not a functional drive-thru bay is Bay 1 which is due to the lifts that are in the bay. The width is 122 feet wide, where the largest piece of equipment the M.D. possesses is a gravel crusher which hovers around 100 feet plus.

“A lot of the time you will take a piece of equipment apart and find something wrong with it where parts are a little ways away. It is essentially a dead duck there. We need the space to work around that for that piece of equipment while we are waiting,” said Pittman, adding during the winter time, no doors have to be opened to move something with the fork lift, and winter welding can be done inside the building for even the largest of machines. “The efficiencies we will see in the shop area is going to see is the central location we put the parts, the tool storage and the shop foreman office. Number one, for the ease of access where you are not walking from one end of the building to another for say a spark plug. The crane has full access where essentially you can grab something you need to lift from one corner of the bay to the direct opposite which is great functionality for those bays.”

“It’s a $7.4 million dollar building that is going to maintain what I think our current inventory of equipment is about $12.5 million which puts it in perspective as well,” said Krizsan.

Documentation provided to the Times showed if everything involving the construction of the building had been contracted out, costs could have escalated as high as $11.5 million. In-house crews were utilized as heavily as possible, including undertaking the civil portions of the project which included site grading, stormwater retention and road ways which included $1.8 million in cost savings. As well, other municipal staff, including the ASB, will assist in site landscaping and other improvements on the site.

“That is a point of pride for our staff that they have been able to contribute to the project in a pretty significant way, while delivering a cost savings to taxpayers in millions of dollars in value,” said Krizsan.

Full completion of the M.D. of Taber Operations and Maintenance Building is expected to be around early September. The project was delayed a couple of months due to M.D. crews tending to the overland flooding that occurred in the spring of 2018, repairing 260 sections of road that were damaged by flooding.

“The services we supply as a municipality are not going anywhere. It is a service that is going to sustain for generations in one building,” said Pittman.

With the building located on a double divided highway, the M.D. has improved the intersections for an added measure of safety for the travelling public and is serviced by an M.D. of Taber service road which will provide unimpeded access for heavy municipal equipment.

“We liked the idea of a service road which made this attractive. You always have turning off the highway, but getting that traffic onto a service road is a nice feature,” said Krizsan. “One thing the M.D. has been very successful with over the years is with the twinning of the highway, is to get those service roads and have the ability to get that slower-moving traffic and local traffic off the highways which is key. That is critical for safe, highway travel.”