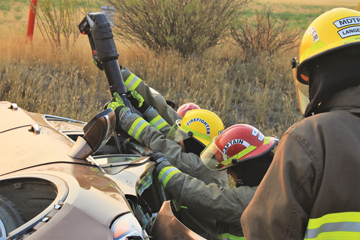 Shortly after 6:40 am on Friday, August 10, 2018, Taber/Vauxhall RCMP members along with the Municipal District of Taber Fire Department, M.D. Community Peace Officers and EMS attended to the scene of a two-vehicle collision on Highway 36, approximately six kilometres north of Taber, Alberta.

The collision occurred between Township Roads 102 and 104 north of Taber, and both vehicles had only one occupant.

The male driver of the southbound pickup truck was initially airlifted from the scene by HALO helicopter due to life-threatening injuries but unfortunately succumbed to his injuries and was pronounced deceased en route to hospital.

The driver of the SUV was transported to hospital in Lethbridge with serious injuries.

Highway 36 was closed for several hours due to the collision and investigation. A collision analyst attended the scene.

All contributing factors into the collision are being considered and the investigation is ongoing.