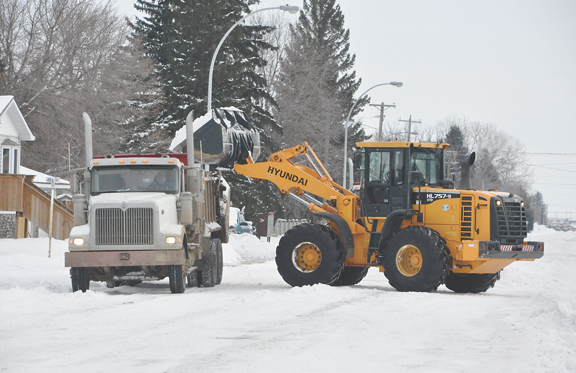 While snow may seem like it’s still far off, the Municipal District of Taber is already discussing a few wintertime services.

After previous policy committee discussion around snow removal in M.D. hamlets, the issue was brought back for further deliberations during the policy meeting on August 7.

A motion was passed during the June policy meeting recommending to council that sidewalk snow removal within M.D. hamlets not be undertaken in the future.

Since the first discussion at a previous policy meeting, residents have been reaching out to a few councillors over the snow removal service.

“I’ve had a lot of feedback from residents in the hamlet(Hays). I was told we weren’t removing that much snow and the residents in town, there are a couple seniors, do the majority of it,” said Coun. Jen Crowson.

“I know that Hays and Enchant have a lot of seniors in the area and some are incapable of cleaning their own sidewalks,” said Coun. Murray Reynolds.

If council were to approve the bylaw to remove the service, sidewalk snow clearance would fall on property owners.

As sidewalks are located within the road allowance in hamlets, the bylaw then would require property owners to do their own snow removal with enforcement of the bylaw coming from their community peace officers.

Peace officers would then be authorized to issue violation tags to any residence that they have reasonable and probable grounds to believe has not followed the bylaw.

With the M.D. owning plenty of commercial lots, utility, parks and municipal buildings within the hamlets, staff will continue to be responsible for those sidewalks.

Senior centres, civic centres and schools will be required to be cleared by the respective group which own and operate the facilities.

While snow removal isn’t a massive service for hamlet residents, some councillors feel it does show them there is some benefit to moving back into the M.D.

“In the Hays area, there is a large majority of seniors that have chosen not to move to the city and to move into the hamlet. I think that is one of the perks or benefits that we have to get people back into the hamlets. I know it’s something little but it is something that goes a long way,” added Crowson.

A factor in continuing the service is the growth of the hamlets in the M.D.

As they have all been growing, some faster than others, it may present challenges to continue the service in the future.

“My initial instinct was if we’re trying to save money, why are we shovelling everyone’s walks? Then my thought has changed a little bit as far as we own quite a bit of the property there, we have the fire departments there, the community halls, the libraries and those kinds of things. To me, there is some not very good use of time,” said Coun. Tamara Miyanaga.
“I do have some concerns because our hamlets are getting bigger and it isn’t all just seniors. We have three hamlets and there are some capable people.”

One option that council could explore if they wanted to continue the service was to have it cost a few dollars.

“If we’re offering it, maybe we attach a fee to it,” suggested Reeve Brewin.

As there were no hard numbers as to what it was costing to clear the snow in the hamlets, there was no way to attach any number to the fee.

Sidewalk snow removal in the hamlets are also not the top priority when it comes to snowfalls and administration estimates that it usually gets done in 48 hours after high priority roadways are completed.

“If this isn’t a huge cost for us and it’s a level of service, there are other services that we provide to other people as well,” stated Miyanaga.

With the service only being offered to hamlets, one councillor questioned whether it would be fair to only provide it to them.

As seniors were being pointed at as a major reason to continue, there are several seniors who are located in the M.D. that don’t reside in hamlets.

“Is this a level of service that we are going to provide to all seniors in the M.D.?” asked Coun. John Turcato.

Council highlighted the fact they would want a breakdown of the cost from the ag service board before making any decision on the service.

A motion was made to refer the issue back to the ag service board and was passed unanimously by council.