Posted on September 20, 2018 by Vauxhall Advance 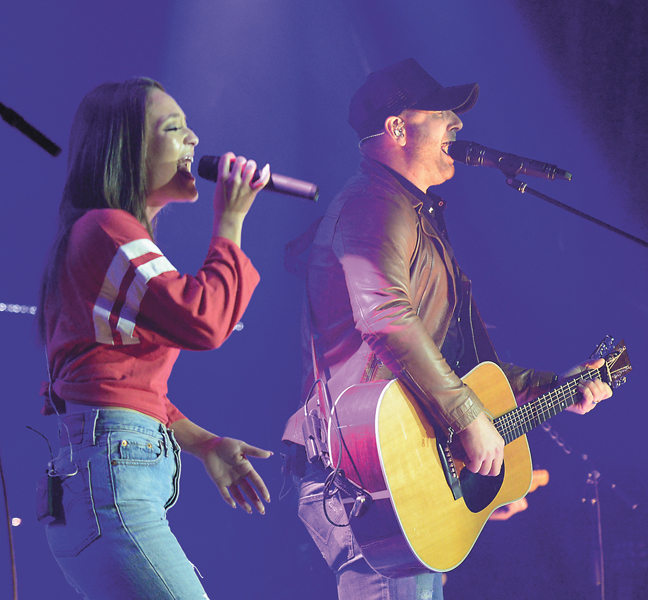 SHOW STOPPER: Kira Isabella had a busy night at the Coors Banquet One Horse Town Concert in Taber on Saturday. Along with performing her opening set, she also sang duets with Dallas Smith and Tim Hicks (pictured). Nealry 4,000 people attended the concert, including support crews, drawing people from all over southern Alberta. ADVANCE PHOTO BY GREG PRICE

Although already in its fourth year of existence, Taber winning the chance to host this past Saturday’s Coors Banquet One Horse Town Concert has made some impressive history.

Despite Taber being the smallest town to win the contest, it released the most tickets to the local public thanks to the wide-open and centralized venue being offered to the outdoor concert in Confederation Park.

“It’s a nice open space and in the past we haven’t been able to work with a space like this. Think of it as designing a floor plan, and at the start it is literally blank. We can put things where we think they should go and opposed to last year in Moose Jaw where it was a bit of a ‘T’. It still looked fantastic at the end of all, but it was tricky, it limited our options,” said Jessica Teixeira, brand public relations manager for Molson Coors in a Friday morning interview with The Advance, as a crew of 130 people helped set up the concert. “In this case, we didn’t have to shut down any businesses.”

Coors work crews descended on Taber last week and the pageantry and glitz of the concert was no easy undertaking.

“It will be a very, very busy 24 hours before the concert. If you were to drive by the venue, on the hour, you would have seen something different. Our team has been arriving in a trickle effect. We had our core team of 12 come on Monday, Tuesday morning at the latest, with people arriving ever since,” said Teixeira. “We are expecting a massive, massive Coors Banquet boot (last used at the Calgary Stampede). A vintage truck arrived this morning. Elements are coming from all over that are a build up to what you see with the end product at 6 p.m. when the doors opened.”

That did not include the pre-scouting Molson Coors did right from back when Taber was a nominee for the contest among six entrants across Canada.

“Our team has been in Taber quite a few times since even being nominated in the top six. We were scouting the area, talking to the town, understanding what emergency services would be required. Once Taber was announced the winner, we’ve been here quite a few times and we had a war room set up in the Town of Taber office, giving us a full room where we had a bunch of stuff in there. The town has been gracious hosts,” said Teixeira.

As Taber went through the nomination process to enter the One Horse Town Concert contest, Teixeira noted Taber fit the criteria to a T as one of the six potential towns to be selected depending on voter turnout.

“It has to be a small town, reason being Coors Banquet was born and still brewed in Golden, Colorado, which is a town of 20,000 people. So Coors is part of that DNA, so small towns will always be a part of Coors Banquet. That is who we reach out to,” said Teixeira. “And the town must love country music. We want to bring a concert to people who will most enjoy it. The nice thing is a lot of small towns already identify with country music with a lot of the thematics that are touched on people can relate to with life’s simple pleasures. We also like to see the spirit of the nomination. Lastly, when we look at the towns that have been nominated, the ones we want to bring forward, we assess their feasibility to host the type of calibre of a concert we would want to host.”

Surprise meet and greets with 18 people selected from the crowd with each of the artists were arranged by Coors staff with the three country superstars. Southern Alberta wanted the One Horse Town Concert, and they wanted it bad with the resulting voter turnout which in itself made some history with the huge final tally, beating put five other small towns from across the country who were finalists.

“It was as much as the total of all six towns who voted for the contest last year. Taber alone almost represented the same number as all six towns last year which is very impressive,” said Teixeira. “The voting here every day was very impressive. The awareness of the concert has gone up because now we have more to show for it these past few years — this is for real and the stakes are higher. You look at the voting on a graph and Taber consistently had high numbers every single day. They were taking advantage of the fact you could vote every day. In the past, you see towns start off really strong and then it tapers off a bit. Taber was consistent all the way through, they were a very deserving town.”