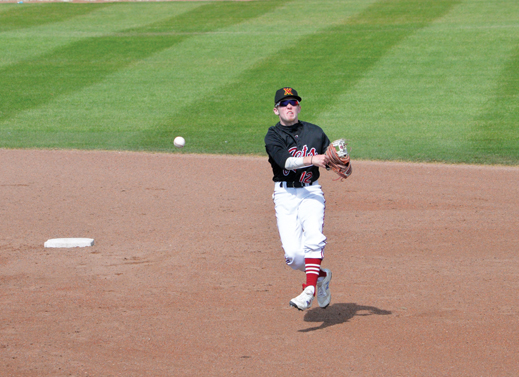 HEADING INDOORS: The Vauxhall Academy of Baseball Jets push for an indoor facility seems to be becoming more of a reality as they continue to accumulate funding for the project. ADVANCE PHOTO BY COLE PARKINSON

While it may be less than ideal baseball weather in southern Alberta at the moment, the Vauxhall Academy of Baseball Jets program is hoping to level the playing field.

Since the beginning of the program in 2006, the team has utilized the Vauxhall Community Hall as their indoor facility, which is less than ideal for the program.

The academy has been in search of funds for an indoor baseball facility for the past few years and are coming closer to their goal.

“I just wanted to give everybody an update, we’re in the process right now, later this week, for submitting a major CFEP (Community Facility Enhancement Program) grant application. We have been fairly successful, we have a few proposals on the table to major companies to help us with the completion of our indoor facility. We are also in negotiations to buy the land just south of the ballpark in Vauxhall,” said Les McTavish, Jets head coach, at the Municipal District of Taber’s regular meeting on September 25.

The land in question is privately owned and McTavish says the owner is more than open to selling the land, which is only across the street from both Jets Stadium and the player dorms.

“He’s trying to sell it anyways and it’s a perfect location, so we’re in that process,” added McTavish.

In discussion with Town of Vauxhall administration, McTavish says they are also on board with the proposed location.

“We’ve talked to Cris (Burns, Vauxhall CAO) multiple times and he thinks it fits,” he explained.

The reason for McTavish’s delegation to the M.D. of Taber council was simply to acquire a letter of support for the project submission for the CFEP grant.

With the hopes of acquiring another big grant, most of the funds needed would be in the hands of the VAB, if successful in getting the grant.

“I think the majority of that $700,000 is outside of the community, we haven’t went locally very much. If we are able to secure the CFEP grant, then we will start looking locally to see how we can get people involved.”

The lack of a proper indoor facility is not only a burden for the team, but the community, as the hall can only host one event at a time.

Ever since the start of the program, one of the biggest issues they saw was upending the community use of the facility.

“I know when we first started using the community hall 13 years ago, that was one of the biggest concerns in the community, which was there were seniors who liked to walk in there in the mornings during the winter. This hopefully would be a much bigger and more comfortable space,” said McTavish.

While the new building would be mostly for baseball activities when not in use by the Jets, it would provide the community with a great facility for a variety of activities.

“My job has been to raise some money and take our vision and get it off the ground. It certainly will be a game changer for the academy, I think it will be a game changer for all of southern Alberta. There isn’t a facility of this magnitude in Lethbridge, or in Medicine Hat, or in Taber. Okotoks would be the closest one. What’s unique about what we’re trying to do here is it’s not just for baseball, it can be used for softball, soccer, possibly tennis. Once you have the money in place, it is easy to see the avenues,” stated McTavish.

“It would all be AstroTurfed and it would be netted so you could literally play a 12-year-old baseball game inside there.”

Vauxhall schools would also be able to use the facility for any indoor activities they saw fit.

In the original design of the facility, there is a golf area that would allow golfers to practice their swing during the winter months.

“We’re just trying to utilize as much space as we can,” added McTavish.

On top of the golf area and baseball diamond, the facility would also feature a storage area and two baseball hitting labs where players can analyze their swings.

The addition of the indoor baseball building would also bring a huge benefit to the players as the teams they play against all have some version of an indoor facility.

“All of the competitors we compete with on the baseball field, would all have their own indoor baseball facilities,” said McTavish.

Council asked how often the Jets would be in the indoor facility during the entirety of the school year.

“September and October would be used sparingly, if possible. With how the weather has been, we either do nothing or we create something in the high school gym, but there’s volleyball practice or whatever. To set up the hall, it takes too long to do it for one night. So for September and October, it would be hit and miss. November through March would be the major time of the facility,” answered McTavish. “Is there some concern in the summer with what we’re going to do with it? It may sit empty a lot in the summer.”

Once the facility is in use, McTavish can see baseball teams from southern Alberta travelling to use the facility.

When the regular baseball season does begin in the spring, there are often times where the weather outside doesn’t permit any baseball activities so there is a good chance teams will elect to drive to Vauxhall.

“I strongly believe people from Lethbridge will drive out, I really do,” stated McTavish.

Council also agreed they could see plenty of teams travelling to the Vauxhall facility.

“It’s nothing for somebody in Calgary to drive an hour to a sports facility,” said Reeve Brian Brewin.

M.D. of Taber council voted unanimously in favour of writing a letter of support for the Vauxhall facility.