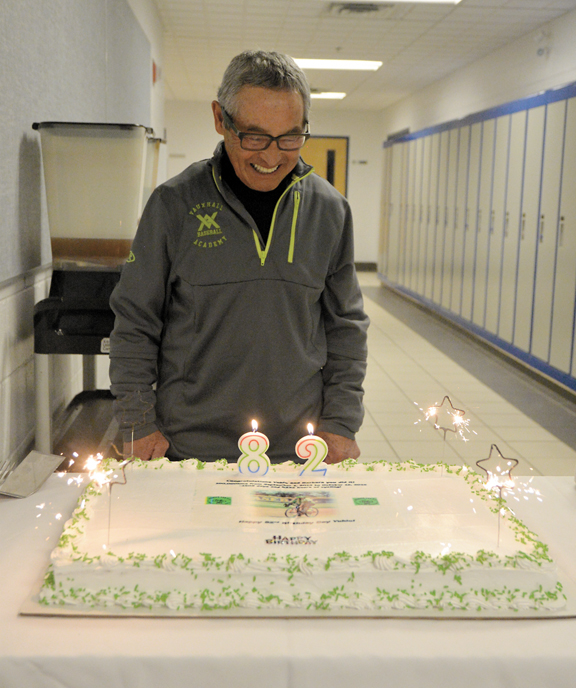 CANDLES AND CAKE: Yukio Kitagawa is all smiles looking upon his 82nd birthday cake during celebrations of his 100,000th kilometre ridden for his Pennies for K’s Campaign in support of the Vauxhall Academy of Baseball. ADVANCE PHOTO BY GREG PRICE

Yukio Kitagawa’s passion for whatever endeavour he has embarked on in life has been self evident since day one with himself and his wife Barbara being philanthropists for the Vauxhall Academy of Baseball.

That passion was front and centre on Friday evening at Vauxhall High School, as Kitagawa celebrated his 82nd birthday and a fundraising milestone among close family and friends, and members of the VAB.

Embarking on his Pennies for K’s campaign four years ago on Sept. 1, 2014, Yukio finally pedaled his 100,000th kilometre on his bike on Friday as he made his way into Vauxhall town limits. The Pennies for Ks campaign took donations for every kilometre ridden, in his attempt to raise $100,000 towards a new indoor training facility for the academy, which can also be utilized by the rest of the community.

Near the beginning of his speech before the celebratory birthday dinner, Kitagawa referenced the lovable fictional character Forrest Gump of Hollywood fame, with the poignant scene of him criss-crossing America several times in his jogging journeys.

“He suddenly stopped his run, and after three years, two months, 14 days and 16 hours, where upon he turned around to face the company behind him and declared, ‘I’m pretty tired, I think I’ll go home now’,” said Kitagawa. “To which his followers queried, ‘what do we do now’?”

That question crossed Kitagawa’s mind as he finished his 100,000th kilometre which coincided with his passion for cycling. Reflecting on the concept that was conceived 1,502 days earlier, Kitagawa has heard of words of amazement in his travels, being hard to imagine a senior citizen spending hours upon hours each day cycling for the betterment of others.

Drawing inspiration from the proverb of Lao Tzu of ‘the journey of a thousand miles begins with one step,’ Kitagawa used it to coin his own phrase that was made the slogan for the Pennies for Ks campaign being ‘a journey of 100,000 kilometre cycling marathon begins with the first 1,000 kilometres cycled’, notwithstanding the significance of the first pedal stroke.

“This gave me the structure, that being my combination of days and kilometres cycled that equaled 1,000,” said Kitagawa. “I cycled 50 kilometres each day for 20 days equals 1,000 kilometres, and know I needed 99 more of those. Once I realized this notion for the cycling marathon was strategic and workable, it was full steam ahead.”

But even the best laid plans for Yukio had their challenges for the Pennies for Ks campaign, which included fatigue, saddle sores, intense winter conditions in Calgary, and an injury from a collision that knocked Kitagawa out of commission for awhile.

“It all conspired to make my cycling goal a test of spirit, ability and will,” said Kitagawa.

That will was forged early on for Kitagawa who suffered through Japanese internment during the era of World War II as a youngster, instilling a much-needed positive attitude, dedication, self-discipline, perseverance, fortitude and a strong constitution.

“Without those life experiences, it would have been easy to pack it in,” said Kitagawa.

From ages six to 12, Yukio’s family was interned on a sugar beet farm during those historic years involving the hysteria of the fallout from World War II.

On the physical side of things, Yukio was routinely assigned tasks that belied the adult version of labour. Psychologically, the toil was just as immense as the physical labour was.

“With the psychological affront, there was the feeling of hurt being labeled an enemy alien, despite being born in Canada. There was hearing the hurtful slurs…,” noted Kitagawa, fighting back tears, as his voice wavered. “Seeing and reading newspaper headline stories, casting dispersions as well as dialogue in war-themed comic books that contained similar disparagements. Yet, through all the very harsh, distressful experiences…”
Although nearly a lifetime ago in the annals of Yukio Kitagawa, the wounds of those WWII days seemed still very fresh in the heart of the man who continued to fight back the emotion of his speech, unable to go on any further without the aid of his wife and Les McTavish, head coach of the Vauxhall Academy of Baseball. “Yet, through all the very harsh, distressful experiences in the formative years of my life, it seems those hardships likely had a profound effect and influence on the core of the person that I was to be, and the subsequent experiences that were to follow,” continued McTavish, reading from Kitagawa’s prepared speech. “I feel very honoured to be favoured by those character traits that made my marathon ride successful, fulfilling and enjoyable.”

Whatever Kitagawa decides to do from this day on with his cycling, he acknowledged and was thankful to many of the individuals who sat in the room for their support as a foundation to help his drive, including his best friend and wife Barbara for handling public relations and daily tasks for Pennies for Ks which included maintenance of cycling gear, snacks for daily rides, bike computer and helmet and headlamps charged daily, and record keeping.

The evening’s festivities included Todd Ojala, president of the Vauxhall Academy of Baseball board of directors, giving gifts of appreciation to both Yukio and Barbara Kitagawa for their years of support for the academy. There was also a video tribute featuring both present and past members of the academy wishing Yukio a happy birthday along with words of thanks.

“You are a great example to all of us. With goal achievement, when Yukio first came to us and talked about riding 100,000 kilometres, he said he’d do it in 10 years. He did it in four years and 42 days I believe,” said Ojala. “With teamwork, you and Barbara make one of the greatest teams I’ve ever seen.”