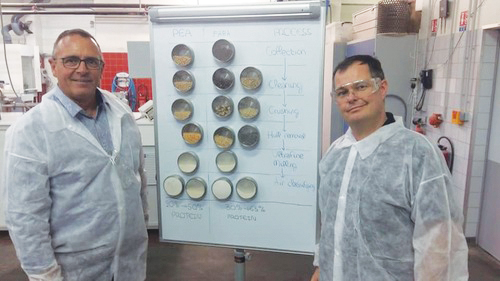 After a quick council decision, two Municipal District of Taber representatives hit the tarmac late last month to head off to France for the 2018 Bridge2Food Protein Summit.

While there was a cost involved in doing so, both have reported back the quick decision was more than worthwhile.

“That was one of the best conferences I’ve ever been to. It was a summit on protein and not just plant-based, but it also had milk protein as well. It was a very targeted and specific conference. Every person you talked to there had a legitimate reason for being there. All of them were involved in protein of some sort. It was so targeted it made it a very effective use of time, really effective,” said Turcato in an interview with The Times after getting back from France.

“The contacts we made were amazing. We are still receiving emails from people we contacted there looking for multiple things, more information on the M.D. of Taber and what we have as far as crops and what not.”

While the two were there representing the M.D., the conference was a way to promote the entire region as well.

“The purpose of attending those events is, currently the M.D. of Taber is doing an economic development regional plan with the Town of Taber and Town of Vauxhall, and we are looking as a region at how we are going to push forward on our regional economic plan. Part of that plan revolves around plant proteins, which has been a hot topic for both the federal government and the provincial government with the awarding of the protein innovation funding,” explained Hughes. “While there, we had a great opportunity on the global stage to bring southern Alberta to the next level. Networking is always important and certainly, there is a lot of different protein innovations occurring in different countries like Denmark, the Netherlands, and France. We wanted to see if they are applicable to southern Alberta, if we can bring those ideas into our communities and how we could benefit on a regional scale.”

Another major factor contributing to sending the duo to the conference lies in the fact the conference is headed to Calgary and Saskatoon for spring 2019.

The contacts made at the most recent conference are expected to pay dividends come next spring.

“Because the conference is going to be in Calgary and split with Saskatoon at the end of May, beginning of June, I think we will have a lot of those people coming here. Because of the M.D.’s presence at this summit, I think we might have secured a tour for the south from that conference,” added Turcato, who also sees the summit as having the potential to return to the area if the first goes smoothly. “If this is successful here, I could see it coming back here again in the spring of ’20, though I don’t know for sure.”

Once in France, the two had the chance to explore plenty of different protein sites and they came away with a bunch of different observations on how it could potentially be applied in the M.D. of Taber.

Networks that were made could eventually lead to business and organizations opening up shop in the M.D. region.

“The takeaways would be the possibility of attracting protein extraction facilities here. This possible tour will make it very worthwhile to highlight what this area has to offer. There is stuff going on in our backyard that we don’t know about so people halfway around the world have no idea what’s happening here. We have a very progressive municipality and area here, it is amazing what goes on here,” continued Turcato. “There are so many things you could target here and even the protein end, there are lots of different things we can profile.”

An enticing proposition brought by Turcato and Hughes was the fact the M.D. has lots of land available for those types of development.

Meanwhile, in Europe, there is a lot less open space.

“They are smaller and in the M.D. and southern Alberta as a whole, space isn’t an issue for us,” stated Hughes. “In different European countries their size limits what they can produce and they certainly have done more work when it comes to research and development, and I think they are a little bit ahead of us. I think that has to do with the fact everything is so nice and tight there, they can cross borders quickly and share information better. Infrastructure-wise, we have adequate roads and rail systems. What I noticed, the difference from France and places like southern Alberta, is population. In the city of Lille, France, I think that whole region has around one million people and the entire M.D. and town of Taber, you aren’t even close but there is a lot more space. That’s where our benefit comes in.”

Irrigation in the M.D. is also quite a bit better, according to Hughes, who stated some were surprised at how well the M.D. was set up in that regard.

“One of the other issues was irrigation. In Europe, they aren’t growing them nearly as big and nearly as many water-intensive crops because they don’t have the irrigation,” he said.

The conference featured delegations from several different countries including the U.S.A., Germany, Belgium, Japan, and China.

Because of the variety of different people at the conference, council made it clear there would be a benefit in sending not only someone on the economic development side but also someone on council which Turcato noted was a good call.

“I heard this from other people that were there from Alberta as well, when a municipality or local government shows up halfway around the world knowing that it is coming here, what it is going to do is, I think it will really highlight people looking into the municipality before the spring conference and I think we will get a lot of people here from Europe because of that and want to be on that tour. It really puts a spotlight on us and that was the important part of sending not only economic development but also a politician,” he explained.

While the M.D. is far from a globally-known entity, Turcato believes the attendance at the summit helped shed some light on what exactly goes on here in terms of agriculture.

“Explaining how many crops are grown here and what we have for processing in such a small municipality. You look at our area and the value we have added here, we punch way over our weight class, we really do, and people don’t realize that. Even people in our own community don’t because they think everywhere is like this, but it’s not.”

Getting on board with proteins was also something the M.D. council felt needed to be done sooner rather than later.

Over the previous years, substantial growth has been evident on that side of agriculture.

“When I started as the economic development officer, this was just starting on the ground floor, now it’s front and center,” said Hughes.

“The economy is global, and we knew that, but certainly the plant innovation protein isn’t a small market anymore.”

While no official partnerships have come yet, there is a good chance something could come the M.D.’s way soon.

“There’s potential and it’s strong not only for the M.D. of Taber but for the Town of Taber as well. I went for the M.D. but we always talk about regional partnerships so anything that will benefit the region, we would do it,” said Hughes. “Council’s big push was to improve the networking and with the summit coming to Calgary, how do we attract those people to the M.D.? It is paying dividends already.”