Posted on December 13, 2018 by Vauxhall Advance 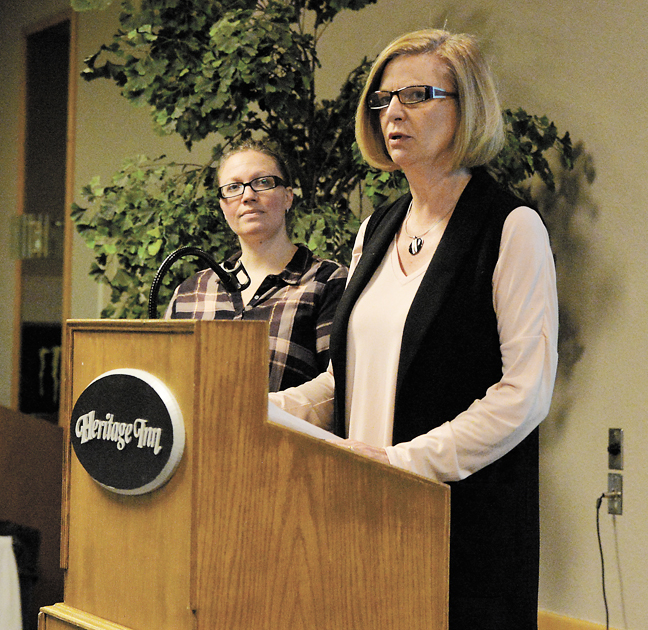 PROGRAM PARAMETRES: Sharla Kane and Tracey Erickson-Driscoll were on hand at the Heritage Inn late last month showcasing the strengths of the Youth Employment Program to the public. ADVANCE PHOTO BY GREG PRICE

Thanks to the sponsorship of Taber Economic Development, the Taber Youth Employment Program (YEP) was showcased with a breakfast meeting at the Taber Heritage Inn, which is available to people in the Taber/Vauxhall area.

YEP is a 19-week skill development and work experience program that is a project under the Taber and District Community Adult Learning Association, and is funded by the Government of Canada as part of its Skills Link Program. Servicing people from 15 to 30 years old, it focuses on people that have had to overcome various barriers.

“The students that come into our program are barriered in some way. By barriers, it could be they are a single parent. Maybe they have mental health issues, it could be a criminal record, they could be newcomers to Canada,” said Sharla Kane, career coach with the Youth Employment Program during the organization’s presentation, alongside Tracey Erickson-Driscoll, program co-ordinator for the Taber Youth Employment Program, who also gave some program background. “Everyone who wants to come to the program, they make the effort to fill out our application which shows us they want to be there. There’s something in their lives that is stopping them from finding success in either post-secondary or post employment opportunities. Our goal in this program is to help break those barriers. We want to train them and help them improve on their nine employability skills.”

“You are essentially getting someone for free, to work, to learn and to train and mentor to give them an opportunity when maybe everyone else has closed their doors in their faces,” said Kane. “It’s easy to maybe get a fast-food job. A lot of the students have had positions like those, but they want more. They just don’t know where to go and they’ve had no one help them go further.”

“In every position, it doesn’t matter what you do, there are three skills needed in every occupation — reading, writing and numeracy. It’s surprising the number of students that come in, that are severely lacking in those three basic, yet essential skills,” said Kane. “Even other simple things like making eye contact with people, filling out simple forms or booking a doctor’s appointment. Sometimes it’s just a lack of professionalism in certain settings that we are trying to change for them.”

In the middle of a three-year funding cycle, a total of 64 youth will be aided by the program from Taber and area. The second half of the funding cycle will start with a new batch of students on Dec. 3 with a group of eight, with the cycle fully ending on March 20, 2020.

Of the 24 students who have completely finished the program, 75 per cent have achieved full-time employment with four per cent currently attending full-time post-secondary studies.

Two have completed their GEDs, with another two working on employment-based certification with another in an apprenticeship program.

YEP is looking for businesses to host students from the programs in areas of interest. Seven of the 19 weeks are done with class work with the rest being work experience.

“The work experience used to be nine weeks, but the government gave us additional funding. We are the only rural community in all of Alberta that has this grant funding. We are battling against major markets like Red Deer, Lethbridge, Calgary and Edmonton,” said Kane. “We are an area of around 8,500 people and we are extremely successful based on the number of employers we have in our area and our population. We are very successful and we are proud of that. Little us are right up there with the big guys.”

“You are there for work experience first and we are there to get them through the first 19 weeks. After that, we still work with youth to find employment, up to six months after that. We provide them resume services, interview coaching and preparation,” said Kane.

The program is also looking for mentorship opportunities for its clients, or having community representatives do presentations in classes.

“There are some students who struggle a lot more than others. It may just be personal reasons etc. not feeling comfortable coming out of their skin. It could be part of the LGBTQ community, or maybe they had a drug abuse past that they are embarrassed about,” said Kane. “We can have people come in as mentors and just say ‘hey, I’ve been there.’”

An example Kane brought up was that of Cardston-Taber-Warner MLA Grant Hunter and his struggles with dyslexia, which he shared as a guest speaker once.

“When he was in Grade 3, he struggled so much with what he was reading, and he found out later he had dyslexia. Nobody took the time to understand dyslexia except for this one teacher who really took the time and asked him if he could read this line,” said Kane. “He said he couldn’t, but he could read the word at the beginning and at the end. And she said she thought she knew what was going on. She helped him and guided him through it for months.”

There was students in the YEP class that Hunter was speaking to, that had dyslexia themselves.

“That touched them in such a way, that someone as successful as he is now (Hunter), got through his dyslexia,” said Kane.

With one more full year still left on the program’s contract, and whether YEP gets another contract will depend on community buy in.

“We do quarterly reporting, but mind you all of our quarterly reports so far have been great. There is always room for improvement, we still have that 20 per cent we are trying to work with,” said Kane. “Even then, even if they don’t find employment or post-secondary education, I guarantee they have come through with improved skills on life and confidence in themselves.”

Kane added, so far in the YEP program, not one student has had negative things to say about employers they job shadowed in, even if it hasn’t worked out in the end for both parties.

“Running this current contract of three years, there was a two-year contract before that I was also involved in. We have had some students let go from their sites, but the student has never come back and said ‘that was the worst place ever.’ Because when they walked away, they realized it was their fault,” said Kane. “They realized they did something that they should have taken more care in. Maybe they didn’t take the training seriously enough that they were asked to do. They are professionally growing with the perspective they are getting from the Youth Employment Program.”

While the Youth Employment Program is available to people as young as 15 years old, Kane cautions organizers try and get the younger people to alternatives.

If you would like to learn more about the Youth Employment Program, you can call 403-416-5115 or e-mail yepcareercoach@taberadultlearning.com.