Posted on August 1, 2014 by Vauxhall Advance 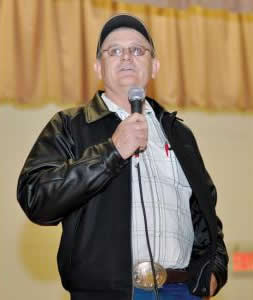 Coaches use the cliché about peaking at the right time.

The Vauxhall Spurs baseball club proved why coaches say that so often as a team that has struggled to reach even .500 all season long, now heads into the State tournament flying high on an eight-game win streak thanks to a stellar performance at the Montana American Legion ‘A’ Northern District tournament over the weekend in Fort Macleod.

“We have peaked at the right time. We definitely had our struggles throughout the year. We had a rough patch there in the middle of the season that involved a Montana tournament, we just weren’t playing good baseball,” said Zach Rhodes, assistant coach for the Vauxhall Spurs.

“It seems like the boys are really bonding together, our pitching staff is coming together, throwing strikes, and we are swinging the bat so much better, too. If we are putting up that many runs the way that we are it helps out our pitchers with their confidence. They are not worried about giving up one or two runs because they know the offence is going to go out there and put up some runs.”

The Spurs pounded its opposition into submission on its way to the district title with a 6-1 win over Havre Northstars, a 9-8 victory over Tri-County Cardinals, followed up by football scores of 17-13 over Fort Macleod Royals and 19-0 to cinch the title over Medicine Hat Knights.

The 6-1 win over Havre had the district tone being set by the Spurs with a dominating duo pitching performance by Jalen Lane and Hunter Johnson.

The Tri-County match featured the most dramatics for the Spurs who were down 8-7 heading into the eighth inning until Matt Perin stroked a two-out, two-run double over the centrefielder’s head to plate the winning run.

“That Tri-County game we saw a couple of really good arms, probably their two best arms and we managed to put up nine runs,” said Rhodes.

Having to go through the loser’s bracket in the double-knockout format, the Medicine Hat Knights had exhausted its pitching making it up to the district final which the Spurs were more than happy to take advantage of.

“But, I’m not taking anything away from our hitters, it wasn’t like it was terrible where they were walking a bunch of our guys giving us free runs. We were just pounding the ball all over the yard with extra-base hits,” said Rhodes. “And that Fort Macleod game they started their best guy against us and we knocked him out of the game early and we went from there and kept swinging it.”

Other impressive stats past the win streak the Spurs is a 13-2 record in the team’s last 15 games as the baseball club has enjoyed a transformation of playing its best baseball at the end of the season and continues to gel together.

“If you would have asked me a month ago that we were going to State I would have laughed. I wasn’t too sure,” said Rhodes. “But the way we are playing now, who knows what will happen with the way we are playing now. A hot ball club going in you never know what’s going to happen. Obviously there will be some good teams down there, but I don’t  question our ability at all to hang with those guys.”

The Spurs started its Montana American Legion ‘A’ State tournament on Tuesday against the host Lewistown Redbirds in Montana with results unavailable at press time.

“I’m excited to get down there and see what we can do,” said Rhodes.