Queens make it to final of St. Mary’s tournament 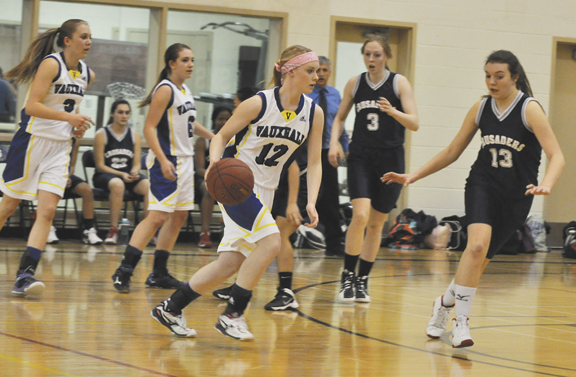 While the Vauxhall Queens girls played the role of royalty for most of its tournament run at St. Mary’s in Taber over the weekend, unfortunately the team played the role of court jester in the championship final against Chestermere Lady Lakers.

“I was pleased with our team’s play until the final. I still quite haven’t figured out what happened there, just mentally we weren’t there,” said Allen Matthews, head coach of the Vauxhall Queens girls basketball team, of his squad’s blowout loss to the Lakers in the championship final.
Hamstrung by an offence that looked like it couldn’t buy a basket, from poor shooting percentages from the field and the foul line, it was chalked up to a championship game where the Queens could do no right.

“We had tuck ins and lay ups that didn’t go in. Some were contested, but those are normally ones we hit. I looked at the stats and we took 63 shots which is just about our average and we had 25 free throws which is pretty close to our average,” said Matthews. “I talked to the girls, and you wonder if conditioning was a factor and then they hit the wall, to was it we just mentally didn’t show up. The girls were pretty fair in their assessment when they said they didn’t show up and when we got behind they started to get frustrated and got down on each other and imploded.”

Queens started its tournament run with a dramatic win against St. Joe’s from Brooks. Down 12 points with approximately four minutes left, the Queens went on a flurry late, scoring eight points with 45 seconds left.

“We put a full court press on and we had even before that. We got some quick steals with quick baskets,” said Matthews of the Queens’ furious rally that resulted in a two-point win.
The Queens moved onto the tournament semifinal against Pincher Creek and pulled out a 15-point win.

“It stayed within four points for most of the first half and then we slowly pulled away in the second half keeping it at a 10-12 point lead,” said Matthews.

“We’re in there and the next time we see Foremost and Erle Rivers we will see where we are at,” said Matthews.

The Queens are off to a competitive tournament in Stirling this weekend which will feature a round-robin format where all three of the Queens opponents are expected to give Vauxhall a tough game.

“We have some tough teams. We have Kate Andrews and they are honourable mention 2A. Then we play Stirling and they are ranked first in 1A and we have Acme and they ranked seventh in 1A,” said Matthews. “It will be three solid teams that will tell us a story.”