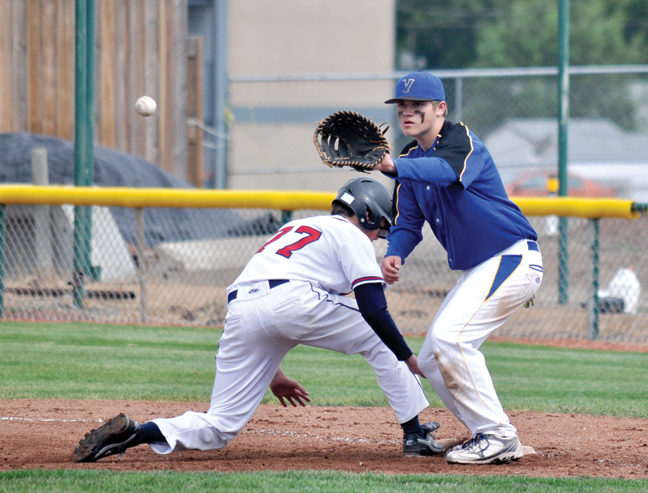 The hordes of Vikings that descended upon the town of the Southern Alberta High School Baseball League Tier I League Championship at Jets Stadium proved too much for the opposition as Vauxhall pillaged the championship banner.
The Vauxhall Vikings baseball team capped off a very successful season, which culminated in a 16-3 win over Medicine Hat High School in the Tier I championship final on the weekend.
“It was close for four innings. It was 2-0, then 2-2, then it was 3-2 for them and then 4-3 for us. For four innings it was back and forth and it was a great game,” said Rob Virginillo, head coach of the Vauxhall Vikings baseball team.
“Then in the fifth inning, it’s high school baseball. They made an error and we capitalize don it, they made another error and we capitalized on it. They made three or four errors and we scored seven runs. We didn’t let up where our guys pounded the ball. We were swinging the bat since the first inning, but we were hitting it at people. When they started to make mistakes, our hits found some holes to compound those mistakes. It snowballed from there. It became anti-climatic by then, but it was a really good game we expected for four innings.”
For Virginillo, it was who could limit the damage from their own errors when it occurred on the diamond.
“If you make a mistake, can you stop it? We made a couple of errors in the final game, but we didn’t let them get anything from the error,” said Virginillo.
“We would make the next play, maybe turn a double play, or the pitcher struck somebody out.”
The Vikings reached the championship Tier I final by doubling up F.P. Walshe from Fort Macleod 12-6.
“There was a couple of close innings, but what it came down to I think was we have a pretty good bench with a great group of kids. There is not one hole in our lineup,” said Virginillo.
“If we happen to make a mistake, there are the rest of the guys that can pick him up and our bats slowly came alive. We didn’t make mistakes and when they made mistakes we took advantage of it. Our pitchers threw well and we were able to get out of any tight jams we put ourselves in.”
It was a similar tight contest to start off the championship run for the Vikings as last year’s playoffs, with 2015 showing the Viking edging J.T. Foster from Nanton 4-3 in its opening game.
“Score wise it was similar, but it wasn’t like last year where we had an actual concern where it was a close game too, but we had to score in the bottom of the seventh,” said Virginillo. “This game we were up and we gave them some free runs on a couple of errors. Maybe we took them too lightly or we couldn’t hit the guy they threw at us, but there was no real panic, we were confident we were going to win it. We were just surprised we didn’t bust out and score some more runs. It was a calmer environment that last year to start off the tournament.”
With how many strong Vikings Vauxhall had to strike fear in its opponents, the overall depth the team possessed Virginillo attributed to a 2015 season that saw the Vikings run the table with an 8-0 in league and undefeated record in the Tier I league championship.
“We had one through 13 that we could put in at any time. We actually had two left-handed starting pitchers that went down with injury that could both play the outfield. For a short time there we were without two starting pitchers and two thirds of our starting outfield,” said Virginillo. “Then we got Matt Melnychuk back in the end which helped us defensively and he pitched a little bit. The guys were not going to let it go, they were not going to be denied. If you host a championship, you better win it.”